When I decided to keep up the vegan eating life for at least another month, I started to grow concerned that we would eventually run out of plant-based joints to visit and also that we would be missing out on festivals and Vanfoodster contests and special food weeks and so on (Oh my god, it's FOMO. We've been reduced to an acronym!). Then La Poutine Week came along and we found there was at least one plant-based featured dish in Metro-Vancouver! 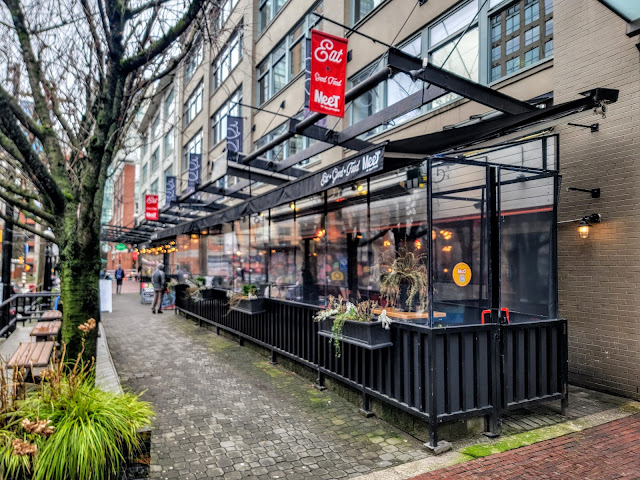 Meet in Yaletown is on Mainland adjacent to the Yaletown-Roundhouse Transit Station. They don't take reservations but we eat at odd hours so that is not a huge problem for us but I feel like they could get lined up at peak hours. A reminder to diners not to linger endlessly as limited capacity means that it is harder for restaurants to make ends meet. 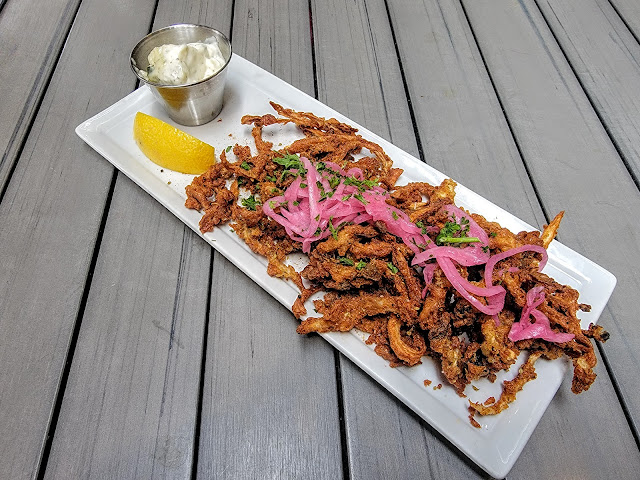 We ordered too much food as usual starting with the Oyster Mushroom Kalamari. It is served with Cucumber Dill Tzatziki. Actually, the Meet website never actually mentions the words plant-based or vegan and I should have known but I emailed them just to confirm (Tzatziki is usually made with yogurt). Apparently, they would like people just to love them for their food and not for their plant-based food! Yes, the tzatziki is vegan as is everything served here and this dish was delicious. I repeat my conjecture that a vegan joint must have a deep fryer! 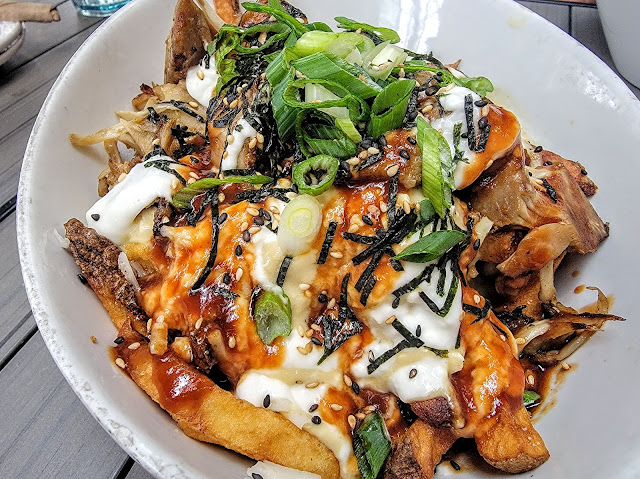 Next came MiY's La Poutine Week entry, Tokyo Town Poutine. I'm not sure what Saputo gets out of this (La Poutine Week sponsor and dairy giant) but we loved it! Obviously, we will be voting for it as our favourite! Really good fries with caramelized jackfruit, housemade tonkatsu, soy mayo and toppings. This was rich and comforting and even Mharie who is not a huge poutine fan (neither am I for that matter....Canada's national food? I feel like we can do better) really enjoyed it! 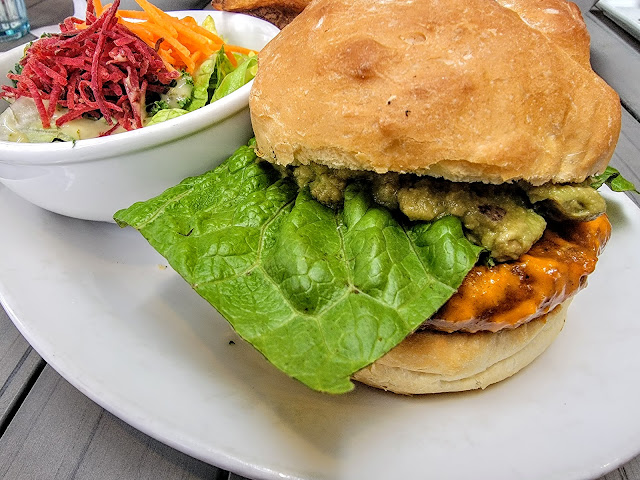 We ordered a burger as one of our mains. An Angry Burg is a battered and deep-fried house hamburger patty dipped in hot sauce and topped with guac and ranch. I'm not sure why I didn't remove the giant piece of lettuce for the photo but you get the idea. To be honest, while this was really tasty and pleasantly messy, the deep-fried detail got lost. The crispy was totally overwhelmed by sauce etc. It came with more good fries and a nice little side salad. 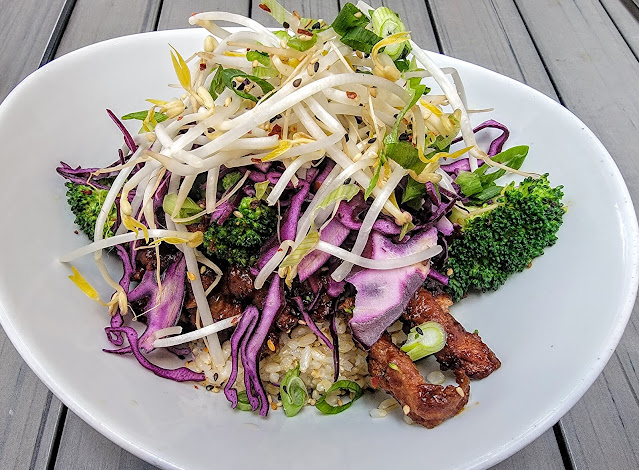 Then a bowl was next. I have realized that following a plant-based diet means that there is very little hope of avoiding bowls. I guess that's not such a terrible thing. This was a Ginger Beef-less Bowl featuring soy curls that have been sauced up to taste a lot like your usual ginger beef but without killing anything. With brown rice and broccoli being the other foundation pieces, we both really enjoyed this. 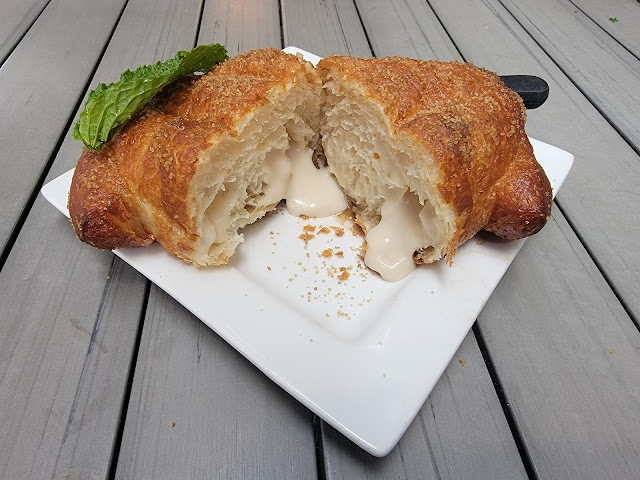 We ended our meal with a Cronut! Actually, since we took a lot of poutine and bowl leftovers to go, this was only the end of our meal in the restaurant. It's the first time we've had a cronut and the coconutty cream filling and coarse sugar on the outside contributed to a good first experience. It wasn't really such a landmark experience like eating Indian food for the first time but it was pretty tasty. 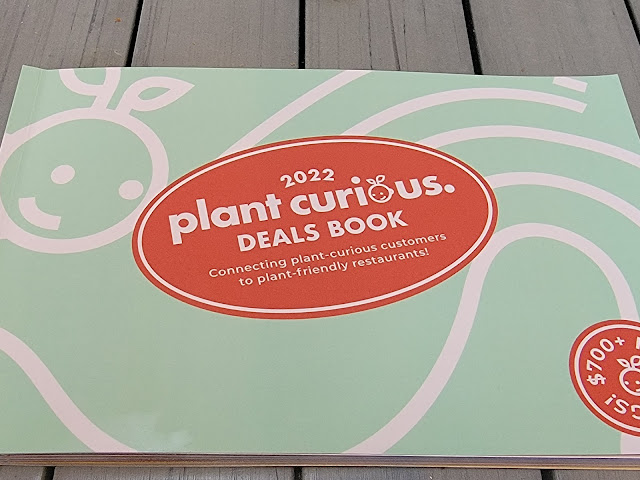 The other fun thing about the cronut was that it marked our first use of the 2022 Plant Curious Deals Book. I haven't had a coupon book since the Entertainment Book days a couple of decades ago (or can you still get them?) but this one comes with a mission to get people trying vegan eats to see that they can be really great! Mharie and I have been to more than half the places but now we have an excuse to go back as well as try some new places. Well done Jordan and everyone at Plant Curious! Google it and get a book for yourself for only $39.99! 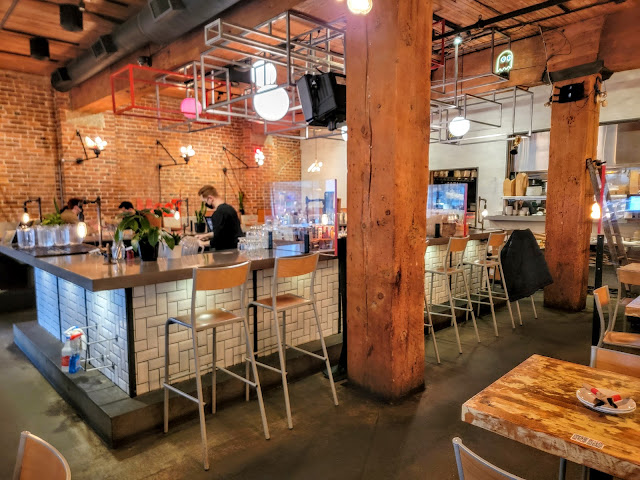