In India, 400 million people identify as vegetarian and the country has the lowest rate of meat consumption in the world.  That being said, the step from vegetarian to vegan can be a little trickier than you would think. Those vegetarians use a lot of butter and dairy products in their meals and to eliminate them requires some ingenuity. Fortunately, Pizza Castle and Indian Curry Vegan Restaurant on Commercial drive seem to do a pretty good job! 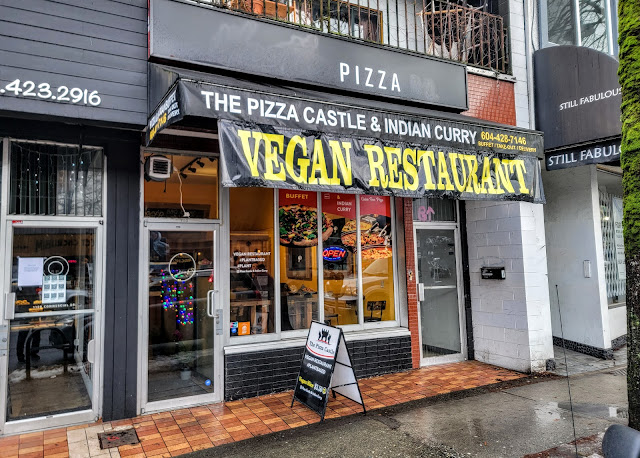 We arrived right at lunchtime on Sunday and had no trouble getting a table. The menu is a little all over the place with a lot of items to make a vegan happy but we generally stuck to the Indian side of the menu. 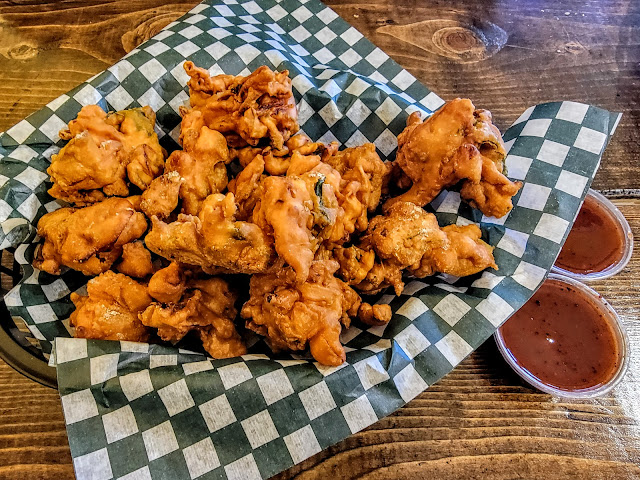 We love pakora and often order them when we eat Indian food. These were obviously Vegetable Pakora and came in generous order with some spicy sauce which we loved. The pakora themselves arrived hot but here and there we hit a dry patch where there was more dough than vegetable. Overall pretty good though! 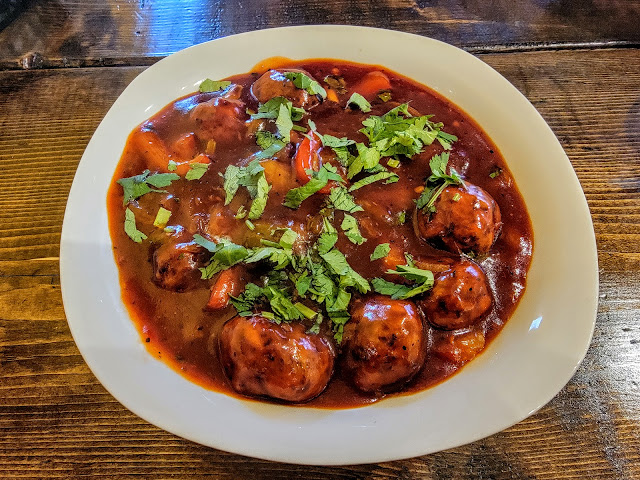 We also tried the Pakora Manchurian. These were more of a meatball (not meatballs obviously but garbanzo flour, I would guess). They came in a great spicy sauce with lots of bell pepper. Again, the pakora themselves required a bit of a chew. 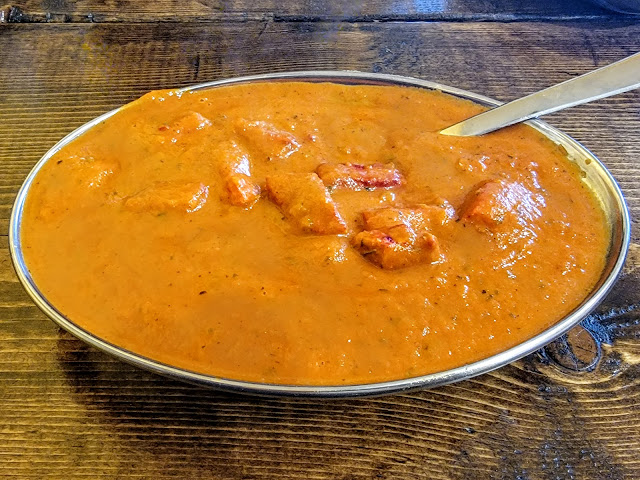 Butter Chicken is Mharie's favourite and our oft complaint is that there is all sauce and no chicken. We did not find that to be the case here. The "chick'n" was a generous portion and pretty decent for flavour and texture. The sauce too was quite good. It was on the more savoury and not too sweet as it can be. 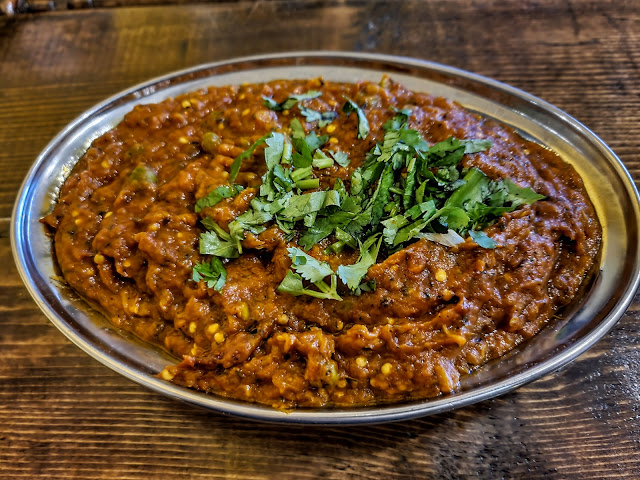 We also tried Eggplant Bharthen which is a dish that starts off being closer to vegan than the butter chicken does! This was a wonderfully rich dish that may have been a bit spicy! I am not sure where it was coming from but I had some warm mouth going on (I will not be using the term spice face). Baked with onions and tomatoes, this is tasty eggplant. 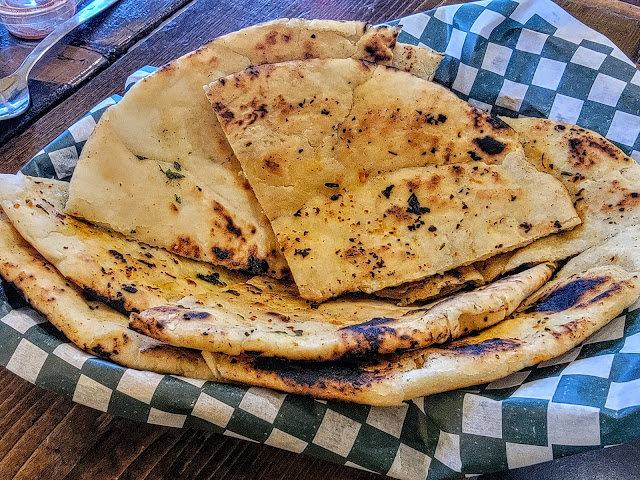 It turns out that Naan is not naturally vegan as every recipe we looked at had yogurt or milk. Anyway, they did an excellent job of the transformation. We loved it. 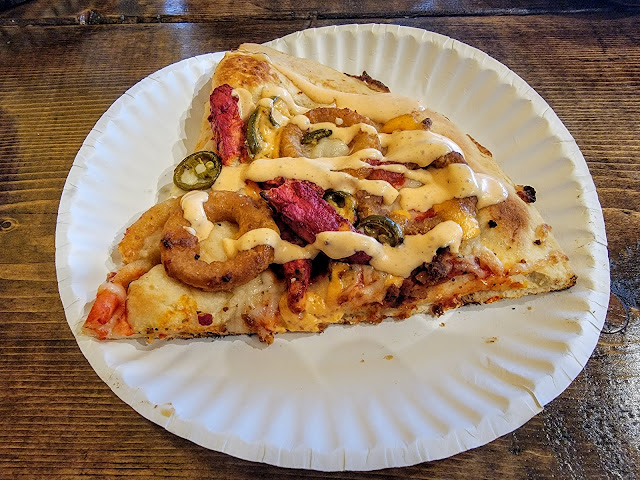 PC also serves vegan pizza not surprisingly. We tried a slice from their ready-to-go selection. It held promise with onion rings being one of the toppings which seemed imaginative enough. We were maybe less thrilled with this than with the other things we tried. The crust was almost cracker-like and somehow just needed cheese! The sauce was ok but it was just a little meh overall. 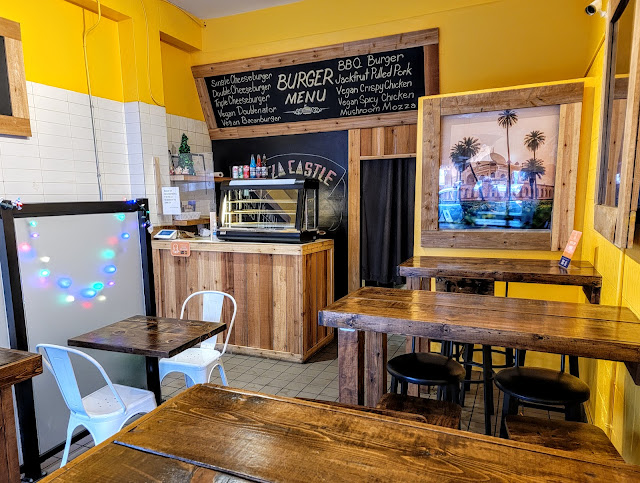