I'm not a vegan. I'm not even a real vegetarian. I call myself a week-day vegetarian which means what it sounds like. Some of you might therefore call me a flexitarian but that is a bullshit label. Literally, every human being on the planet is a flexitarian and the label holds absolutely no commitment other than to eat exactly what you feel like eating anytime or anywhere. At least I've got the weekday thing going on and to be honest, I'm not even religious about that. I stick to it for the most part. So go ahead and call yourself a flexitarian. We all will know that you just want to sound like you're doing something.

I started fooling with a vegetarian diet four decades ago after reading Frances Moore Lappe's book, "Diet For A Small Planet." It taught me about the problems that a carnivorous diet causes for the planet. I learned that 16 pounds of plant protein go into making one pound of meat protein. I also learned about protein complementarity and how all the talk of not getting enough protein on a plant-based diet is crap.

Three further personal elements went into my leaning into plant-based eating. The first was that I really like legumes and whole grains. I always loved the rice and beans that came on the side when we went for Mexican food and I realized that many world cuisines rely heavily on these two food groups which just happen to work together to produce complete proteins. Secondly, I was an inherently cheap guy and I loved that a plant-based diet was much less expensive. You could save the animal proteins for weekends and much less of your income would go towards feeding yourself.  Thirdly, evidence was mounting even at the time that cutting animal proteins was far better for your health. We weren't overly aware of climate change back at the end of the 70s but that factors in a great deal now. Not to mention, the unethical treatment of animals.

Just a note about organic foods. I am not a fan. Not that I am in favour of raping the earth but organic food is the food of the privileged. Many organic crop yields are literally half of that of conventional farming. If all farmers went organic, how would the world feed itself? Not that conventional single crop massive farms are the answer either but organics are promoted by "big organic" in the same way that "big oil" continues to push its own money-making interests to the exclusion of evidence-based science and the interests of people in general. Don't be fooled. Sorry folks but the answers lie in GMOs which are safe having been exhaustively tested and investigated before being made available to the public. All you now furious organic eating people need to read some peer-reviewed science and not the health magazines available at your local health food store.

Here is what I ate today on World Vegan Day: 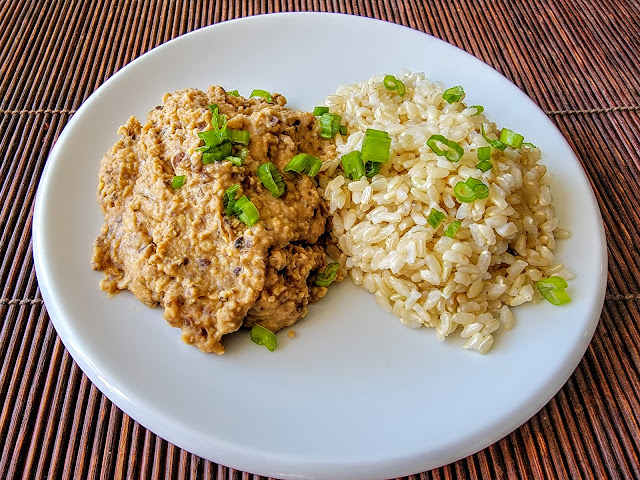 Lunch was rice and beans as it is on most days. You are welcome to roll your eyes at this point but I am practicing intermittent fasting these days so lunch is the first meal of the day. You can read some decent evidence-based science about it and it makes me feel pretty good. The bean mixture is my own variation on hummus and I love it! Every three weeks I make a batch and freeze it in one week portions. Two cans of garbanzos and one of black beans along with a 1/4 cup of peanut butter, some chipotle, liquid smoke, smoked paprika, cumin, chilli powder, salt, pepper and enough tomato sauce or even ketchup to make it a little less solid. All of it gets thrown in the food processor. Brown rice of course. I don't usually garnish my lunch at work but hey, this is a blog post!
I also oblige myself to eat a couple of pieces of fruit a day. I am not a huge fan of fruit but it's part of a balanced diet, right? Today it was an orange and an apple.
My afternoon snack today was a couple of rice cakes with some marmalade. Just a bite to tide me over to dinner. 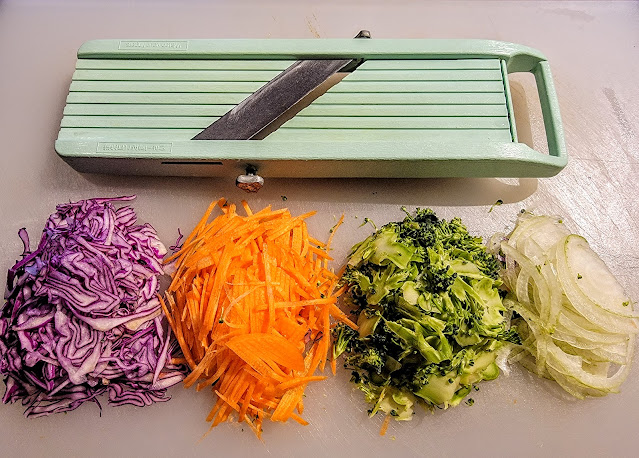 Dinner starts with vegetables and I love my mandolin for this. Mix them up and shred them thin and then stir fry them in a little olive oil quickly. I might add a little soy sauce, miso paste or gochujang at the end and put a lid over them to steam them a bit. Whatever you have and however you want to finish them just remember that vegetables are at the top of the new food pyramid and they are the thing most people often like the least (Not me. I love vegetables). 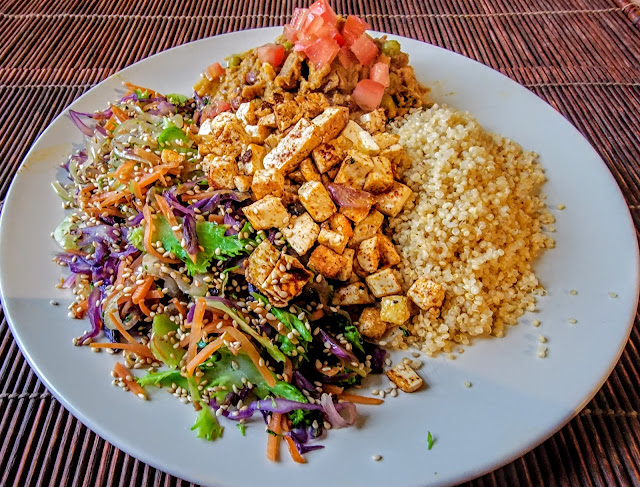 Joining the veggies on my dinner plate where more of my usuals. Quinoa, stir-fried tofu and curried lentils round out this healthy vegan meal. I make my curried lentils in quantities that allow me to freeze them too. I use one of Patak's curry pastes, a can of tomatoes and a can of coconut milk along with whatever veggies I have on hand. Peas are good as are sweet potatoes and cauliflower. I don't really have a recipe. I just add stuff that tastes good! And I almost always love the results!
As mentioned, I'm more of a vegetarian than vegan and most days a little sour cream or shredded cheese will make an appearance. I like a fried egg on top once in a while and I have a weakness for frozen yogurt.
But today is World Vegan Day.
There are so many reasons to cut back on animal products and I hope that one day, I will have the fortitude to take this to the next level.
As a baby boomer, I am aware that my generation has had a large hand in screwing up the planet and many of us still deny that anything is even wrong. It is just pure selfishness.
Eating less meat is one thing that everyone can easily do to reduce their carbon footprint but even that does not absolve us of all responsibility.
Happy World Vegan Day!

By Yes! We're Eating Vegan Again! at November 01, 2021
Email ThisBlogThis!Share to TwitterShare to FacebookShare to Pinterest