For eats that travel well and remain delicious (take out) but are a little difficult to pose (make look pretty), try Middle Eastern food. At Sumerian Grill, we found more melty cheese than I expected, which does not transfer from take-out container to plate very well but is solidly in our most tasty food category. We also enjoyed delightful salads and dips and amazing hot from the oven bread but you may not be impressed with my 'staging'. 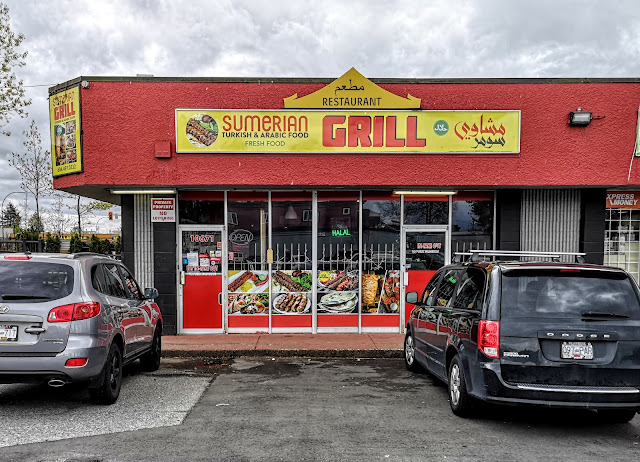 Located in the not most impressive part of Whalley (although admittedly, we visit a lot of restaurants in this area which have provided uniquely tasty cuisine from Africa, Mexico, the Caribbean and Korea so far), the Sumerian Grill offers mainly Turkish and Iraqi cuisine mostly cooked at literally 1000 degrees in their brick oven imported from Turkey. 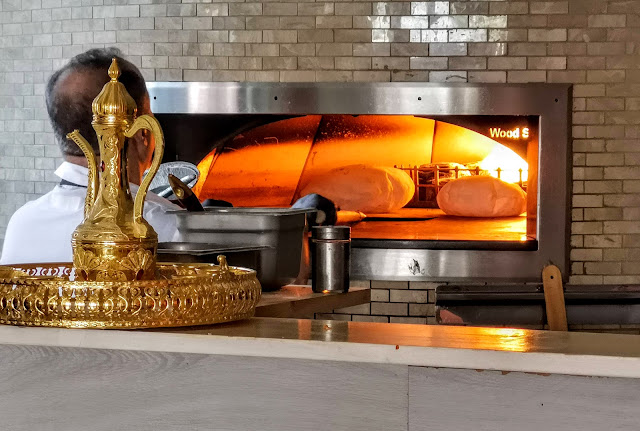 The chewy puffy amazing bread produced by the 'pitmaster' is lavash and should not be missed. Watching to the man at work was the most interesting thing I have seen in a while as he moved dishes and bread around, gaging the heat. 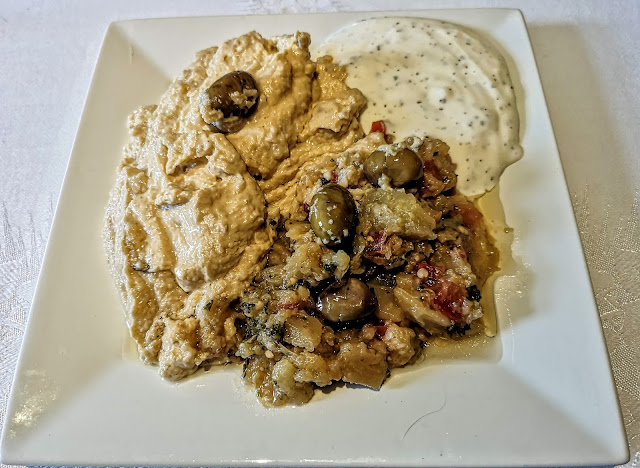 Back home we dug into the appetizer plate with our bread. The baba ghanoush was amazing and smokey. A more coarse eggplant mixture than we have had before (maybe a regional thing) but that was a positive. Also on the plate was humous, and Tzatziki with some excellent green olives. 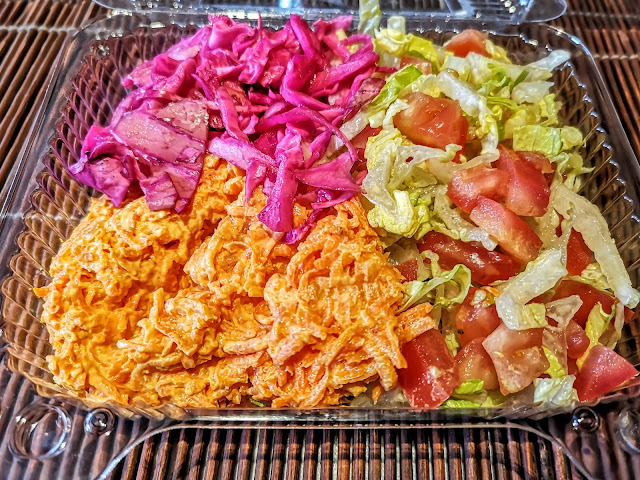 Three salads were a part of the appetizers (called Mixed Plate on their menu). There was a pretty standard green salad, what we think was pickled cabbage and what turned out to be a carrot salad ( I was convinced that it was squash or sweet potato). The carrot salad as excellent and rich with mayo. This was not a crunchy salad but a cooked arrangement though served cold. 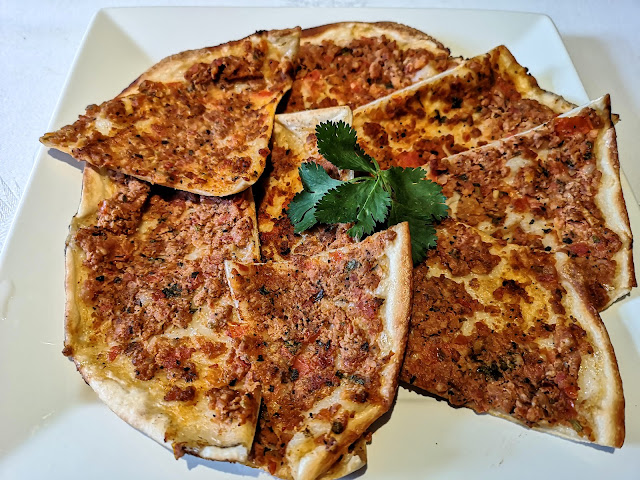 Next up was Lahmajun, a treat that we only discovered a few months ago when visiting the little cafe of the same name (slightly different spelling) in east Richmond. It is a thin crust with a ground meat topping. No cheese on this one but the ground meat topping was helped along by some onions and such and a tomato type base. The inappropriate coriander garnish is mine (should have been mint maybe?). Tasty. 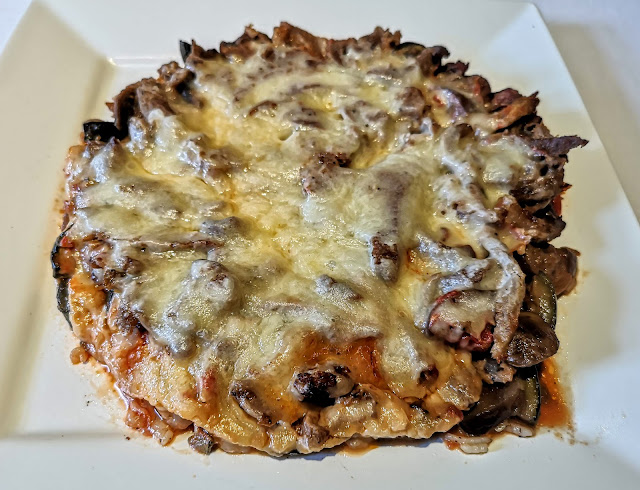 This Shephard's Guveche was a treat, partly because I had never heard of such a thing and partly because of it was a delightful combination of beef, cheese, eggplant mushrooms and zucchini which was warm and comforting! It doesn't usually come round to the table but you've seen how take out containers are shaped, right? 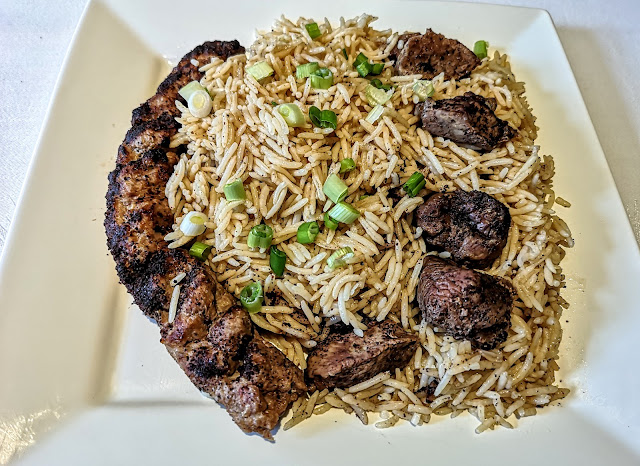 Finally, and probably a staple of Turkey and the Middle East, in general, were some kebab and basmati rice! We did find the lamb and beef (one kebab of each) to be a little tough but it was nicely charred and tasty. The total for this feast was $60 but frankly, as usual, it was more than 2 meals for the 2 of us. 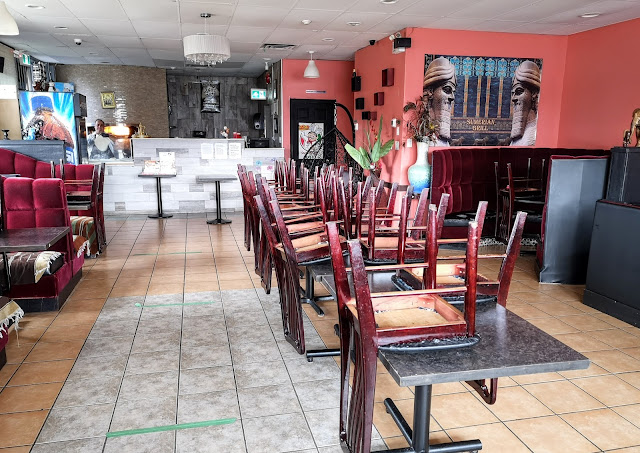 And so is the latest in my series of lonely dining rooms that will hopefully be half busy before too long and maybe still busier eventually.
For what its worth, we give Sumerian Grill 3 1/2 out of 5.

By Yes! We're Eating Again! at April 27, 2020
Email ThisBlogThis!Share to TwitterShare to FacebookShare to Pinterest