In my eternal cheapness, I ended up with two painful layovers at LAX on my ways to and from Houston. Considering that LAX is one of the busiest airports in the country, it doesn't seem to be in too bad a shape but it could use a bit of a facelift. Anyway, I'm not actually vacationing here so it's not that important. At least my wait time allowed me to seek out some healthy food. 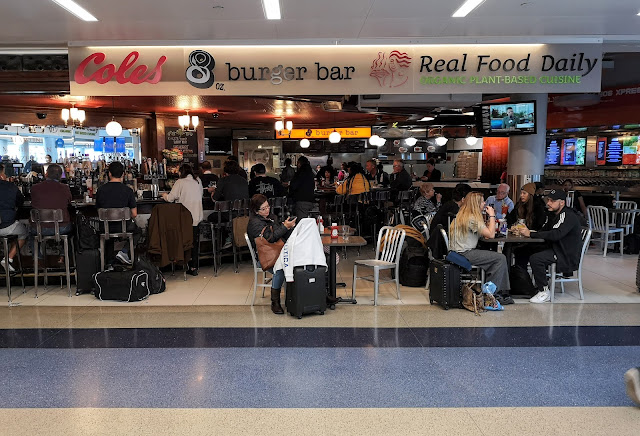 I was only really in one main area of the airport as all my flights were on American Airlines. Buried deep in what I would call a bit of a food court I found, Real Food Daily. Of course, the liquor and beef drew the main part of the crowd to the front of the food court seating and the healthy place in the back was a little less busy. Big surprise. 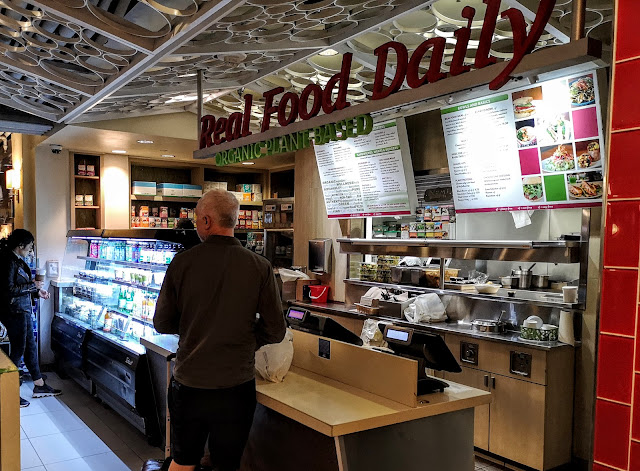 So I ordered their Original RFD Burger with the works which came with a salad. The total was about $22 USD including tax,  a full $3 more than is listed on their actual web site menu (and yes, that is comparing apples to apples). Time to update the website or people might think they are being deceived. 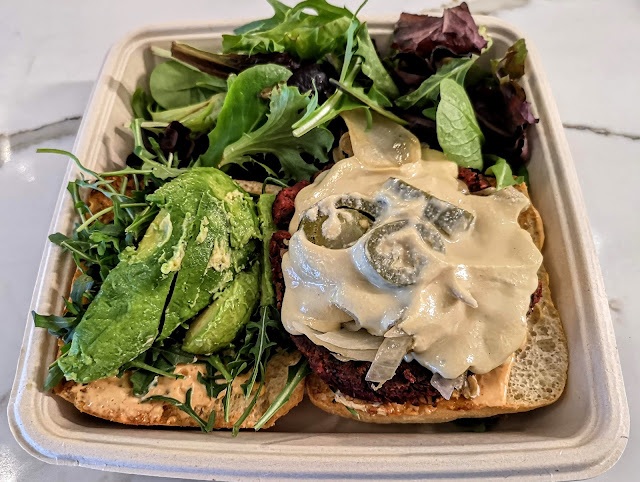 It came with a house-made lentil-based patty which was frankly quite good. Anyone can throw a Beyond Meat patty on a bun (and in fact, they do offer that version at RFD) but I liked this better. The works included tempeh bacon, cashew cheese and avocado. Not bad. 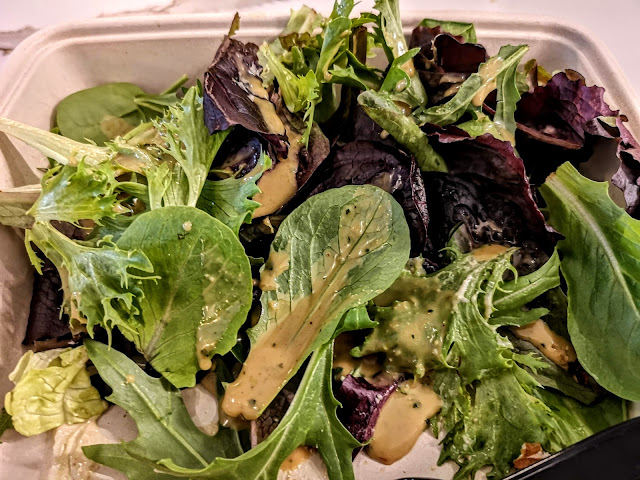 The accompanying salad was more than just an afterthought with a nice variety of greens (well, this is California) and a choice of dressings. There is a decent choice of other things on the menu here including Seitan and Waffles and vegan Argentinian BBQ etc. The only thing is that my $22 USD is actually $30 CAD when I convert to the legal tender that I earn and live on. $30 is a little steep for a burger and salad even if it was pretty good. Mind you, we are in an airport so most things are a little pricey.
On my next stopover, I decided to try a vegetarian pizza from Sammy's Wood Fired Pizza and Grill. 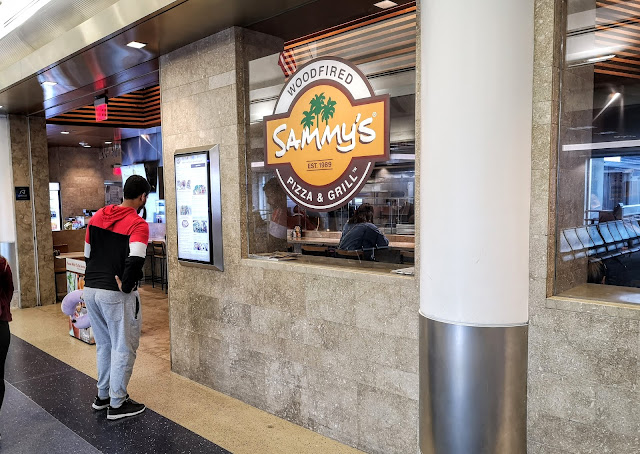 Sure enough, they serve wood-fired pizza but this is not the 90-second pie that comes out of a 900-degree wood-burning oven. I timed my pizza at about 6 minutes in the oven. I think we are looking at a gas-burning oven with wood for a bit of smokey taste and effect. 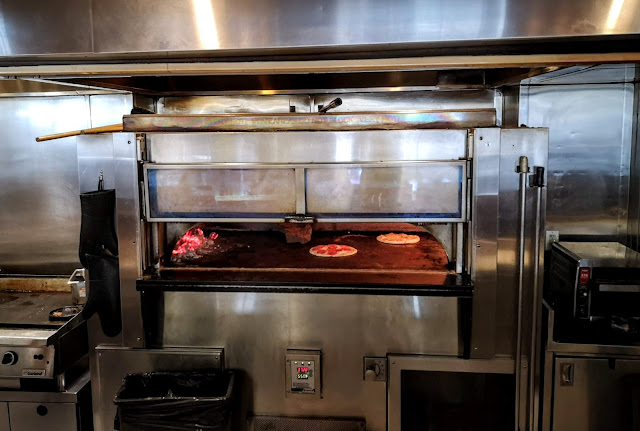 I am not sure how they would get away with the more traditional Italian pizza oven in an airport. 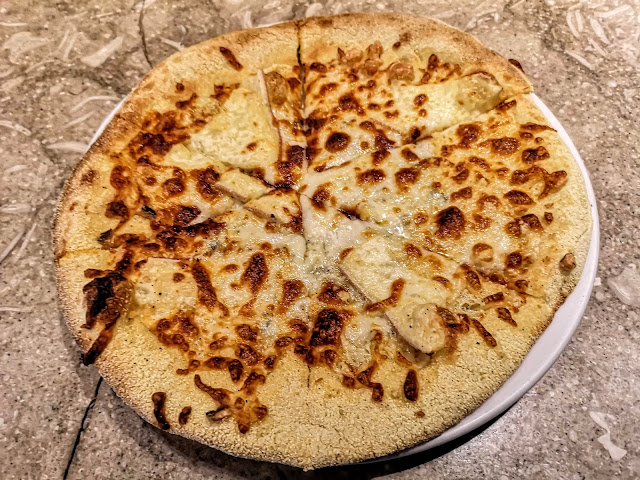 Anyway, I ordered their Four Cheese Pizza for $15.50 (a damn sight less expensive than the vegan burger that I had a week ago). The four kinds of cheese were smoked Gouda, Gorgonzola, Mozzarella and Romano. The crust was pretty decent but would have been better had it gotten the 900-degree treatment. They weren't cheap with the topping either. This was pretty tasty. 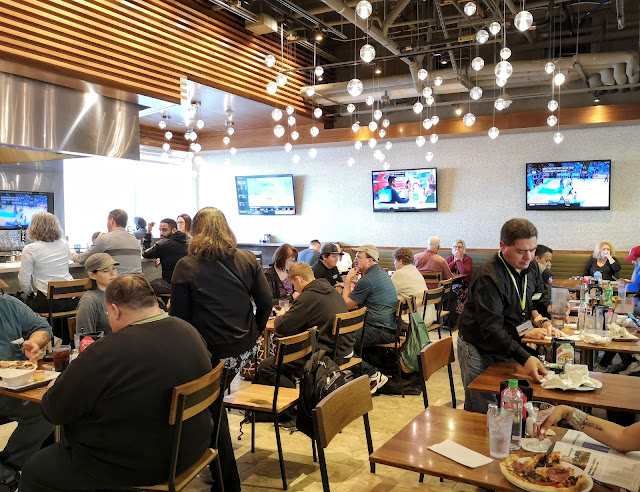 Though it offers a bit of respite from the busy airport, it was busy in the dining room and space was at a premium.
So anyway, vegetarians and vegans don't have to starve here at LAX but neither would I be inclined to make a special trip for the food.
For what it's worth, I don't know, maybe 3 1/2 out of 5 for both places?

By Yes! We're Eating Again! at February 21, 2020
Email ThisBlogThis!Share to TwitterShare to FacebookShare to Pinterest