Off The Grid Cafe

It's nice to be back from Houston but the bar has been raised impossibly high on some things, like barbeque and Tex-Mex. Still, I have always said that it would be unlikely for us to seek out Asian food anywhere else than here, in Metro Vancouver (as the bar is impossibly high!). Some places just do somethings well and it pushes your appreciation up! I don't know if anyone here does chicken and waffles like Roscoe's in Los Angeles, but Off The Grid impressed us for sure! 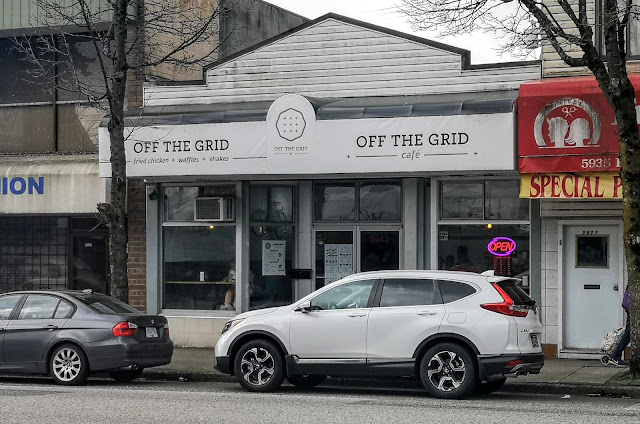 I came across Off The Grid while looking at Scoutmagazine.ca's "Never Heard Of It" list. A few things have changed since then (i.e. they are on Fraser Street instead of Kingsway and while there was nothing on the menu over $8 now there is nothing on the menu over $13 ....inflation, right? That article was written in June, 2016 so not that surprising but they still have some good stuff going on. 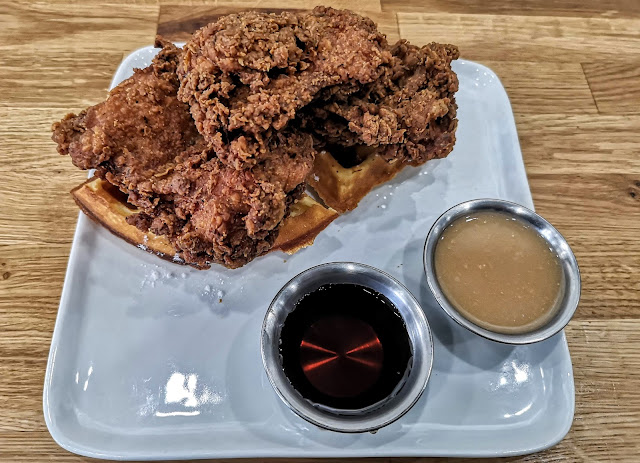 We ordered their Chicken and Waffles because, well, we always do! They were pretty generous with the chicken and it was excellent! Three (the menu says two) crispy yet moist inside pieces on waffles with gravy and syrup on the side. This would challenge as some of the best fried chicken that we have had in Metro Vancouver. The waffles weren't necessarily the best, however (could have been thinner, crispier, less meaty) but as the vehicle they were acceptable. We enjoyed this a great deal. 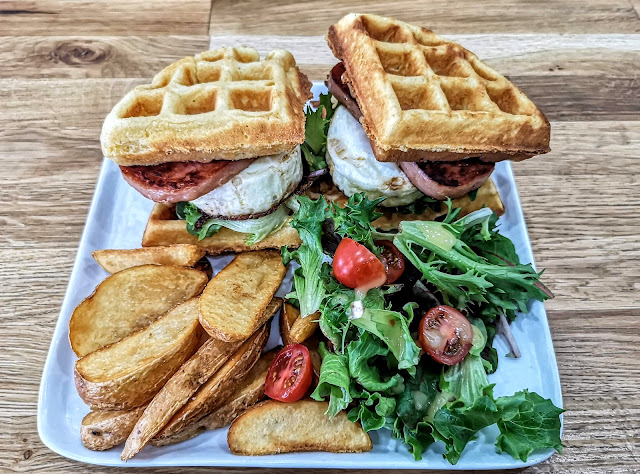 The menu gets creative beyond the main event and so we tried the Spam Waffle Sliders. Don't ask me why we tried that it just seemed out there. So the sliders themselves consisted of a fried egg in addition to the spam as well as some greens and mayo. Not bad! We still would have preferred thinner waffles and that would have made this a bit more of a handheld. The salad was well done and not just greens to colour up the plate! The wedge fries were ok too. 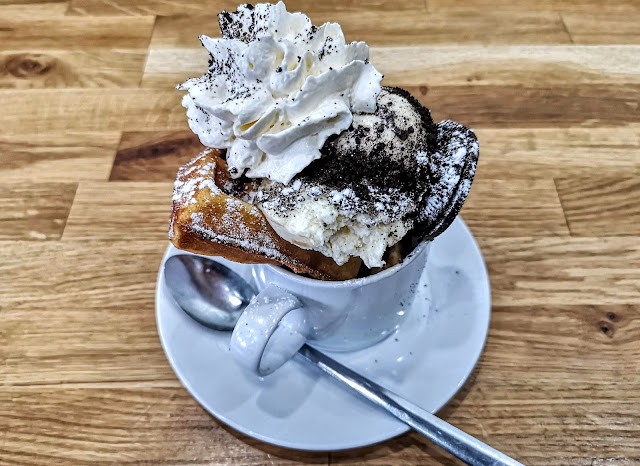 The dessert possibilities here all include waffles of course and we decided to try an Oreo Waffle Cup. At this point, the cafe was getting busy and the service kind of fell off the rails. I am not sure if they did not anticipate being so busy or if they just had some new people that day? Around us we were aware that our neighbours did not get what they ordered and there seemed to be confusion. Our little Waffle Cup with ice cream, Oreos and whipped cream (not too complicated) took over 30 minutes. I would not have known that except that I was keeping an eye on the paid parking and had to pump another buck into the metre. Still, the finished product was tasty enough. 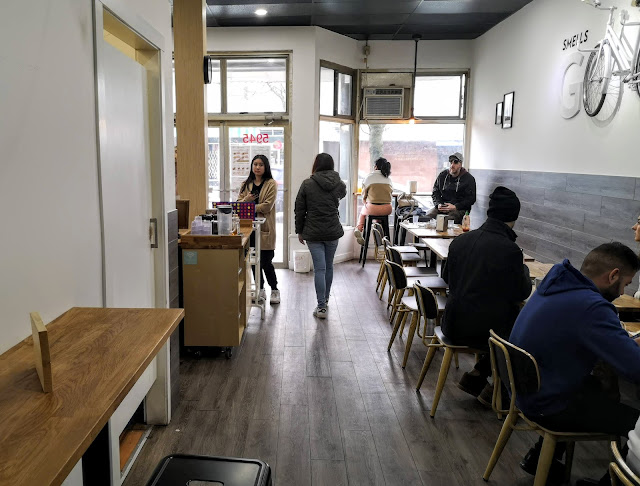 We liked Off The Grid despite the little stumbles. I certainly feel like the waffles themselves should be a little more of an impressive part of the line-up. Still, its a sharp little place and they have a $5 student menu which is great for the John Oliver kids from next door. And I will do almost anything for great fried chicken!
For what it's worth, we give Off The Grid Waffles 3 1/2 out of 5.

By Yes! We're Eating Again! at February 23, 2020
Email ThisBlogThis!Share to TwitterShare to FacebookShare to Pinterest