What can you go to Houston and not do? You cannot not go to Johnson Space Center. It is a stunning experience when you see what has been done by the Nationa Aeronautics and Space Administration over the course of its history. 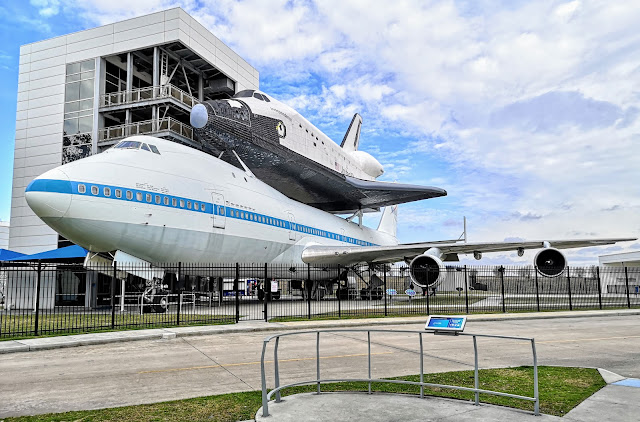 It turned out that this space shuttle is a moc up but the 747 underneath it, was used for the 30 years of the space shuttle program. 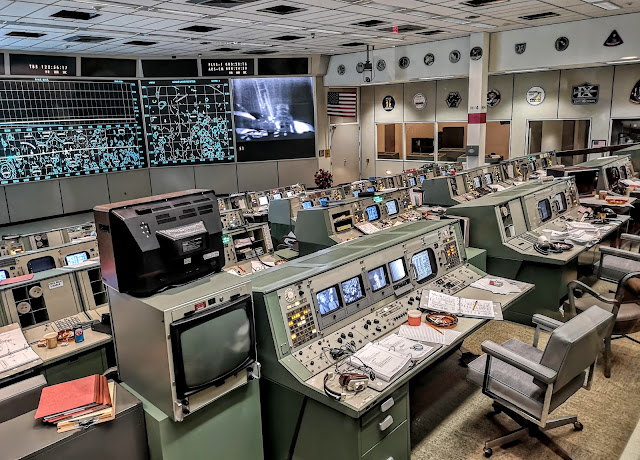 This is the actual control room that landed Neil Armstrong and Buzz Aldrin on the moon. Amazing! I always felt sorry for Michael Collins but someone had to mind the store. 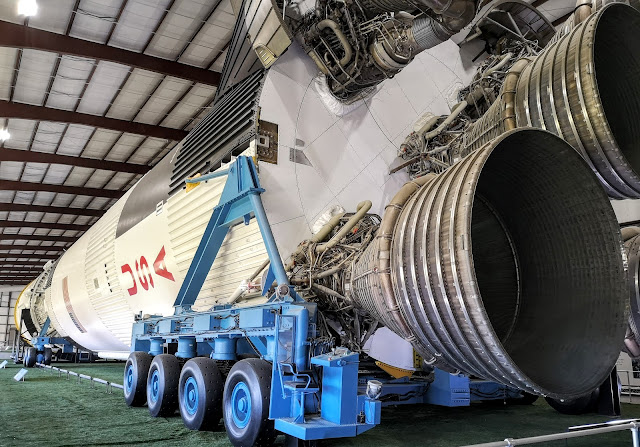 The tours take you to see one of the 3 remaining Saturn 5 rockets (they built 20 and used 17) that powered the Apollo program. Three hundred feet long! 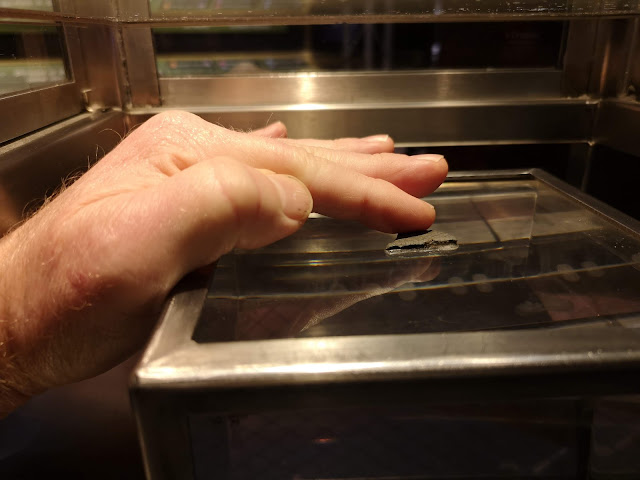 The displays cover the past (Apollo, Space Shuttles) the present (International Space Station) and the future (Artemis). Not to mention the Mars rock which I am struggling to touch and photograph the same time. How is that we have a Mars rock, you ask? Google it! 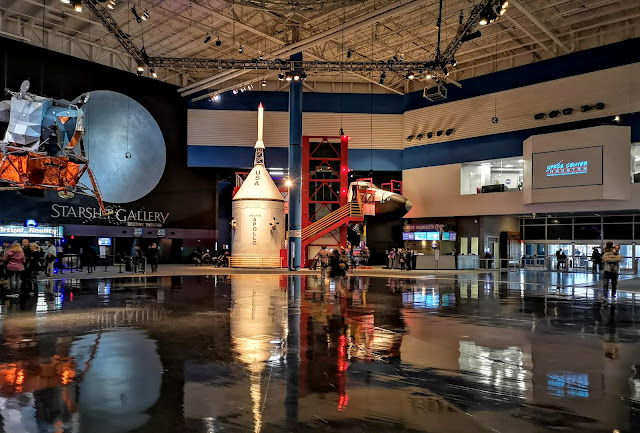 I could literally go on for pages about this place. There are so much history and science and imagination to be explored. I paid $30 but I think I could have bought my ticket for less online. I caught a Houston transit bus from downtown that takes about an hour and drops you right at the door.
Back in Houston, we decided to try another well reported on Mexican place, called Teotihuacan. Note the nice edit on the photograph. Sheesh. It is right across the road from Pinkerton's. 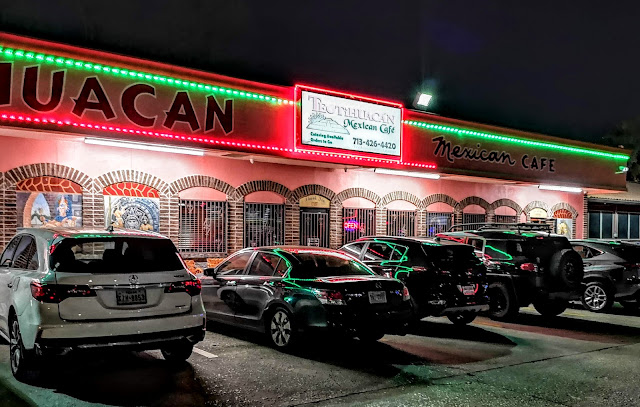 They started us off with chips and salsa as usual. To my surprise again, the chips were not house-made but the salsas were great! 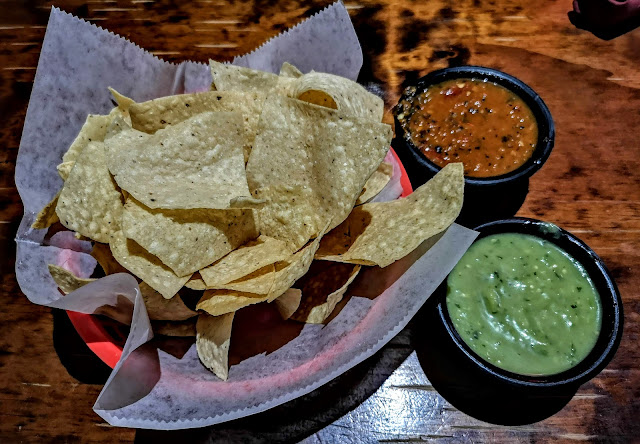 We tried a starter called Flameado which was basically melted Monterey Jack and crumbled chorizo that you scooped up with thicker than usual delicious tortillas. 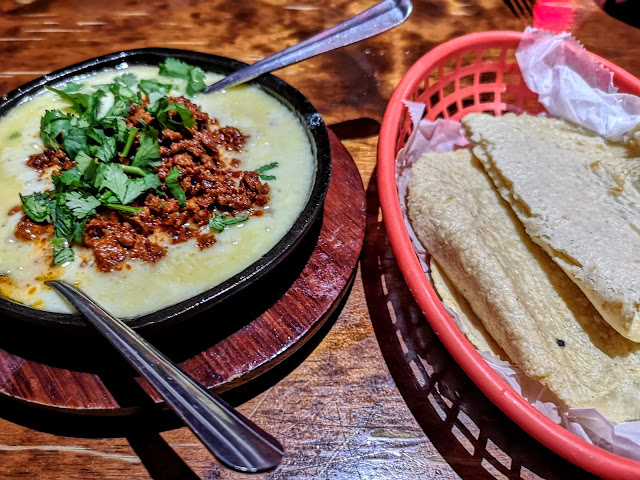 Now I don't know if this is what you would call an authentic national dish of Mexico or even Texas but it was rich and melty and absolutely decadent. I loved it. What is more, when we couldn't finish everything, it warmed brilliantly in a microwave. 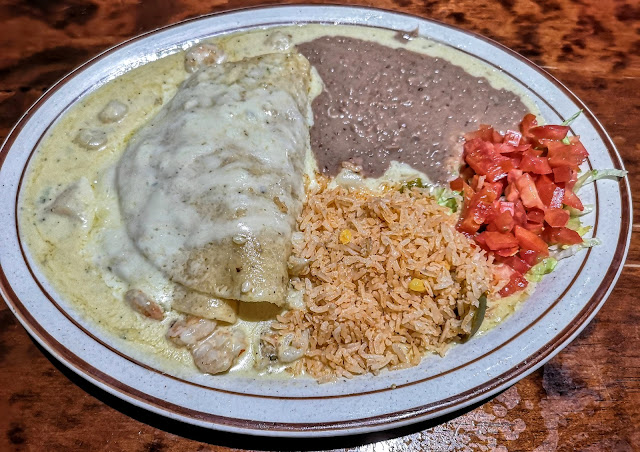 Dave had the Seafood Enchiladas. These were swimming is a sort of cheesy Mornay (and I mean swimming in the best way possible). There were scallops and shrimp and both just nicely cooked. There was just a slight taste of the ocean which was very pleasant. 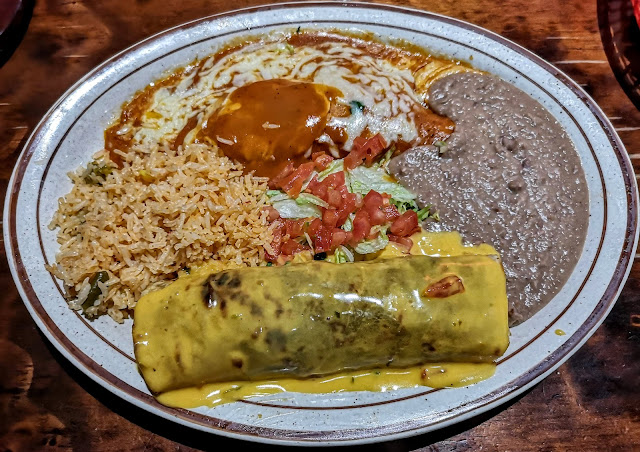 The menu is quite extensive here and in the end, I just stabbed my finger at the menu. I think I ended up with a Cheese Enchilada and a steak burrito. The beef had a nice char from the flat top and some very rich beef flavour. The enchilada also was covered in a rich tasty sauce and lots of cheese. Refried pinto beans would never be my first choice but they were tasty enough and this whole plate represented comfort. 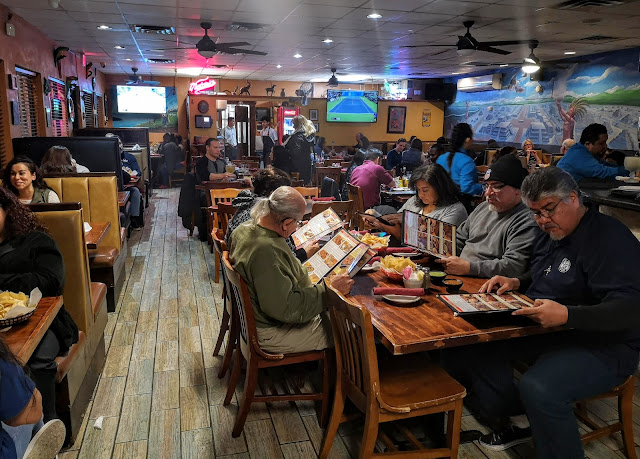 A busy place but these folks are very efficient at what they do. There were on top of refills and clearing the table and generally impressed the heck out of me. Warm, noisy, friendly and comfortable, I was happy that we chose this place.
For what its worth, I give Teotihuacan (I can barely spell it, let alone say it) Mexican Cafe, 4 out of 5.

By Yes! We're Eating Vegan Again! at February 16, 2020
Email ThisBlogThis!Share to TwitterShare to FacebookShare to Pinterest