Back in February of this year, Shameless Buns showed up as an idea on Instagram. As fully 50% of "Yes! We're Eating  Again" is Filipina, I was excited to see what they would come up with as their intention was to serve "unapologetically Filipino" eats. It took us a while but on Monday, we finally made it our to meet Corvette and Matt and to sample their food. 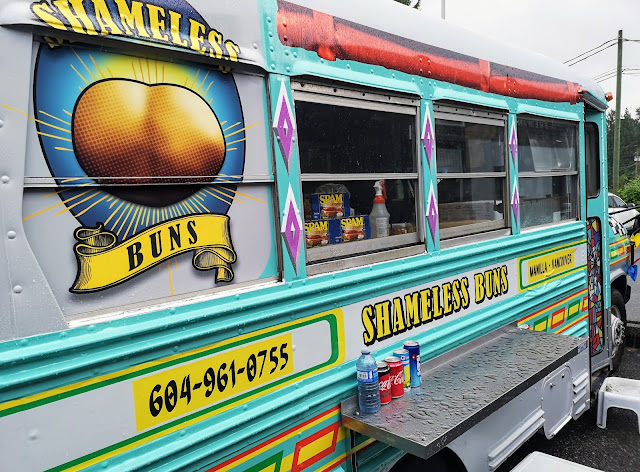 The Filipino touches start with the food truck itself which is based on a "jeepney", a convenient form of transportation in the Philippines. The Shameless Buns truck is not quite as outrageous as some of the vehicles you might see in  Manila but it might be as close as is legal here! Monday was wet and rainy as Victoria Day so often is but we were welcomed to sit down inside Yellow Dog Brewing Company to enjoy our food. 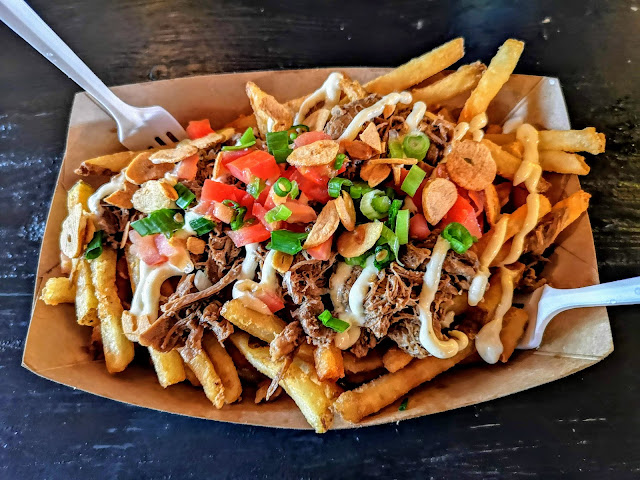 We started with Adobo Fries which was an all-round crowd pleaser! Decent crispy fries were the vehicle for a generous amount of adobo braised chicken. As the national dish of the Philippines, adobo is meat that is marinated in vinegar, soy, garlic and black pepper and then slow roasted. S.B. serves all this with their adobo gravy and a garlic calamansi aioli for more distinctly Filipino tangy flavour. Seriously delicious! 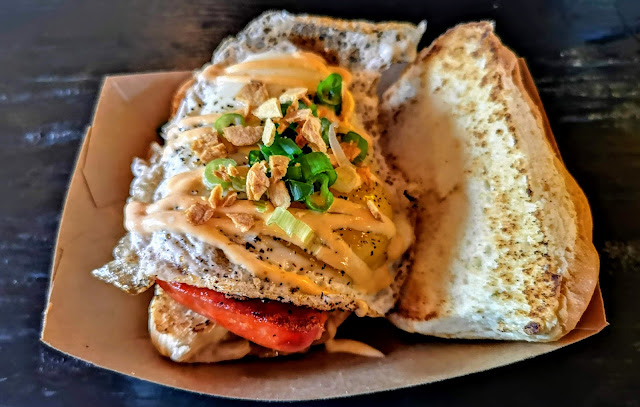 The main event was one of their feature Shameless Buns. At Corvette's urging (she helped us with a strategy to try as much as we could in one meal!), we had The Little Sausage! This longaniza sausage,  another Filipino favourite is served on the slightly sweet iconic pandesal bread. Sweet and spicy, its hard not to love longaniza by itself but add in a fried egg, siracha mayo, pickled papaya and garlic chips and you have something comforting and delicious. 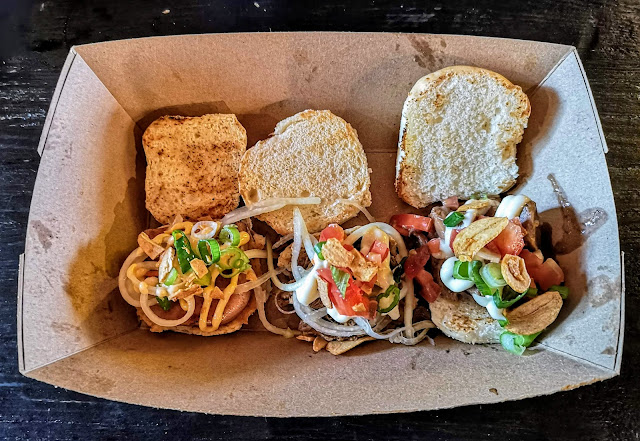 In order to get a taste of the other sandwiches, we ordered the 3Some (Yes.I said 3some). Basically wee sliders that give you a taste. These featured spam (more on that later), more chicken adobo and Jackfruit Coconut Adobo. Just a taste of the latter told me that I could live the rest of my life on it. Almost vegan (I am guessing that the aioli has egg) jackfruit is an ingredient that becomes another  vehicle for the Filipino flavours.
I still wanted to try at least one more thing so when the weather improved a bit I sought out Shameless Buns at the end of the VCC Clarke skytrain line. 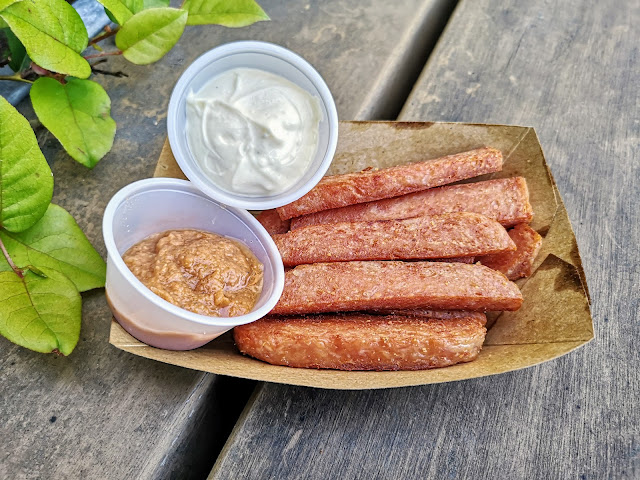 My goal was to try their Spam Fries. This was a lovely salty, pleasantly fatty greasy, slightly crispy treat. Spam in Filipino cuisine is the result of American forces being based on the islands for many years (not unlike Hawaiian cuisine). Deep fried (OMG! Is there anything that is not better when deep fried?), served with house-made banana ketchup ( A Filipino condiment developed to offset wartime shortage of tomatoes. The bottled stuff is colored red to imitate tomato ketchup) and garlic aioli. Try this! Oh my God! 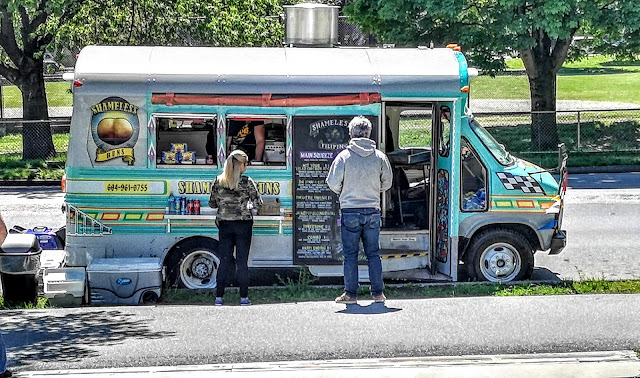 If you are Filipino, don't come expecting the food that your mother made but open your mind to flavours that will remind you of home. If you are not Filipino, this is a good introduction to the flavours of one of the 3 most populous immigrant groups in Metro Vancouver (We will worry about introducing you to balut later).
For what it's worth (and obviously, we're a little biased here), we give Shamelss Buns 4 1/2 out of 5.
Look for them on the Street Food ap.

By Yes! We're Eating Again! at May 23, 2019
Email ThisBlogThis!Share to TwitterShare to FacebookShare to Pinterest