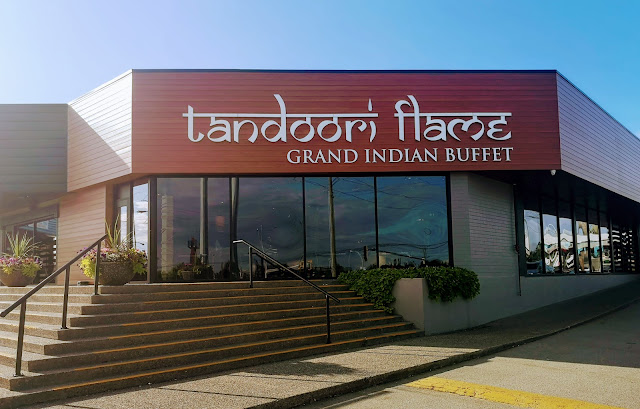 That doesn't mean that I wasn't giddy to finally get to Tandoori Flame. Having read about the long line ups when they first opened, we were happy to see that things have settled a bit and we were seated right away. I admit that I had some misgivings because of the negative reviews with niggling problems that I had read but you can ignore all that whiny stuff (Tip: If you are choking on chicken bones, you are eating too fast!). Our experience was all positive. 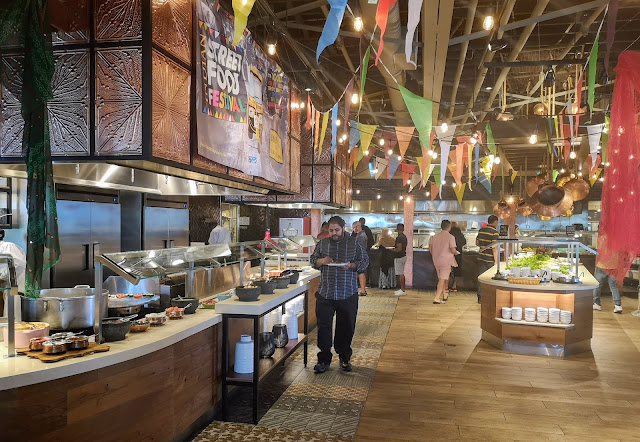 While it is true that the buffet is not as large as what I had observed on the website (apparently the Brampton branch is pictured), there is a huge selection of very good food to try. And the place is quite beautiful although I neglected to photograph the dining room! 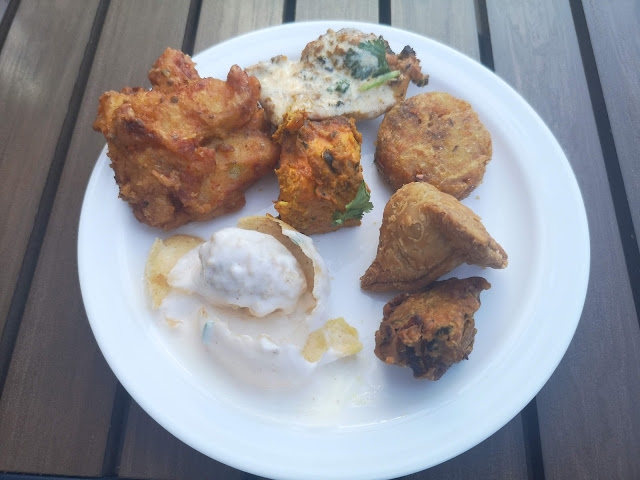 We started at the beginning and faithfully worked our way around the room. 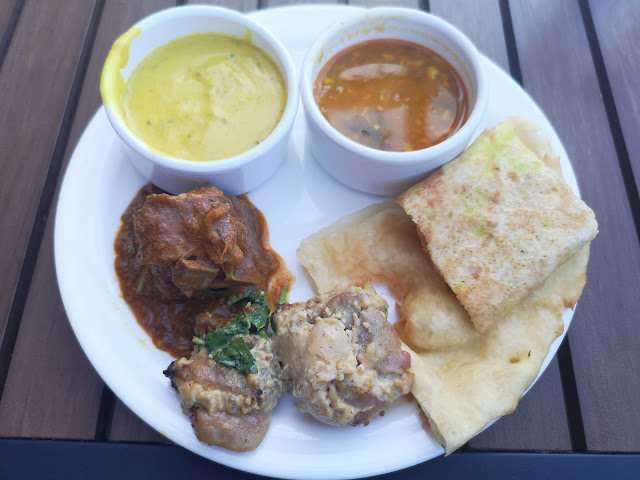 It was best to catch the deep fried items as they came out of the fryer and the naan when it came out of the tandoor. As for the rest, Indian food lends itself to buffet style because many of the dishes are braises or stews and can be held on a warming table with no adverse effects. 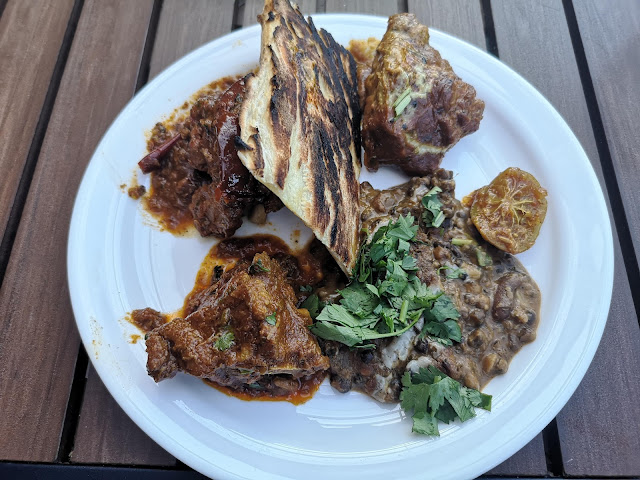 To be honest, I can't even remember what most of these dishes are but some of my favourites included the goat and lamb dishes. The meat was ridiculously tender and so well flavoured! And I enjoyed anything labelled "Murgh" which evidently is a style of cooking dating back to the Mughal empire of medieval India! How about that! You and I are both learning something now! 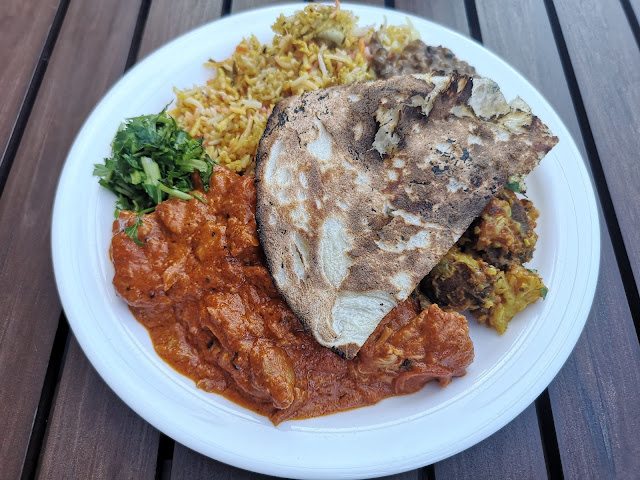 We enjoyed some old favourites as well. Marie loves her butter chicken which was lovely. 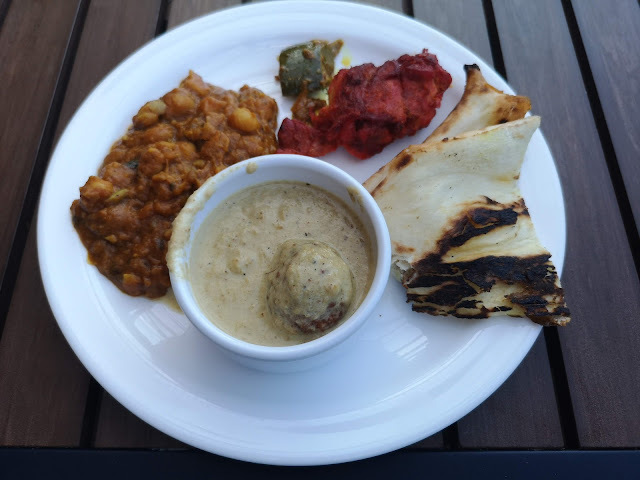 I avoided the tandoori chicken until there was nothing new to try. As expected, it was a little on the dry side. Not sure why this is such a popular dish...because its red? And I must confess that the dosas were a bit of a disappointment also but its is something that needs to come to you directly off the cooktop and does not lend itself to being kept warm. 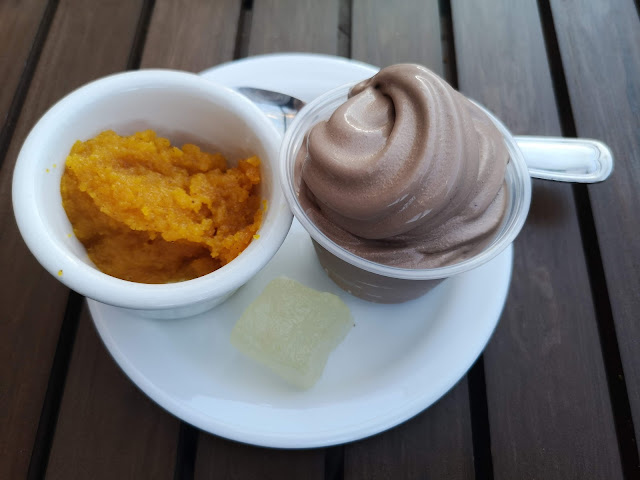 Finally a little desert. There was a large selection of diabetic comma inducing Indian deserts. Take it easy in this section but try the white pumpkin pieces (see the little white thing on my plate in front of the ice cream?). It has a bit of interesting almost crunchy texture and is something that I had never experienced.
Let's talk economics. I know there are cheaper Indian buffets around and too be honest, I can't demolish a buffet like I could when I was younger but the quality of the food here is quite good (and nicely spicy ) and continuously being prepared and replenished. It is worth it just  because of the wonderful selection and I, in trying to be brief in my review have not even told you about everything! The folks here were lovely and attentive! Please give this place a try!

By Yes! We're Eating Vegan Again! at September 02, 2018
Email ThisBlogThis!Share to TwitterShare to FacebookShare to Pinterest