We like the night market but frankly, I am not a fan of the crowds and the lines and it is not a cheap date night. I got smart and bought a zoom pass this time, $25 for 6 passes and you can skip the long gate line up. Do this! We were a group of 10 or so (Marie's family including the folks visiting from the Philippines) and we declared an every man for himself system for snacking but kept meeting up to see how everyone else was doing. 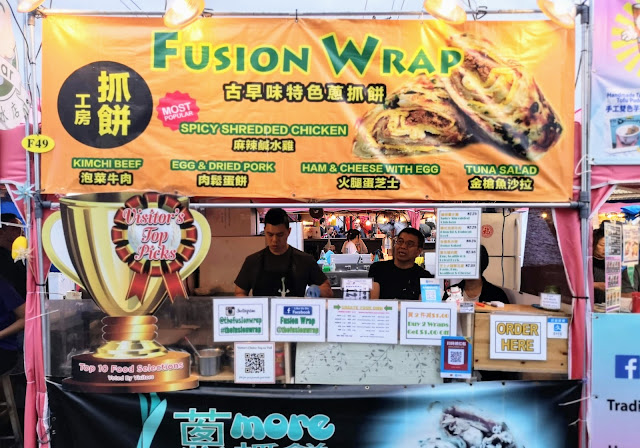 Fusion was a theme for me starting with Fusion Wraps Kimchi and Bulgogoi Wrap. The wrapper itself was a highlight being cooked to order on the flat top. It was parantha like being layered and very tasty. Evidently listed as one of the top ten fan favourites at the market, others in our group were equally impressed. 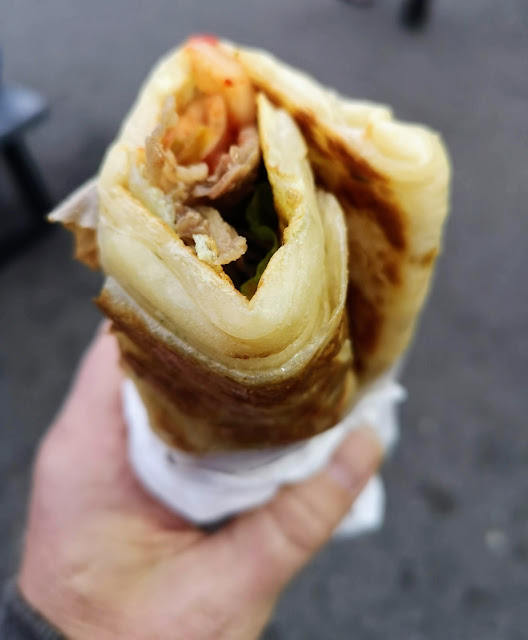 I tried to stay away from things that we had previously tasted but Marie and I find it hard to resist the deep fried squid. 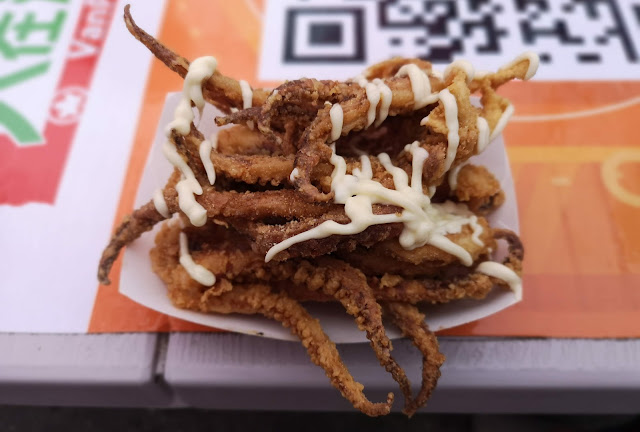 It was, as always tender but crispy. More people walking by asked, "Where did you get that?" than anything else we ate all evening! The torrential down pour that followed proved efficient for clearing out the less dedicated among us and for the balance of the evening, lines were short. Sitting down became impossible though as all the seats were soaked! An extra hand was required to hold an umbrella which was challenging as was not whacking folks in the crowd with said umbrella! 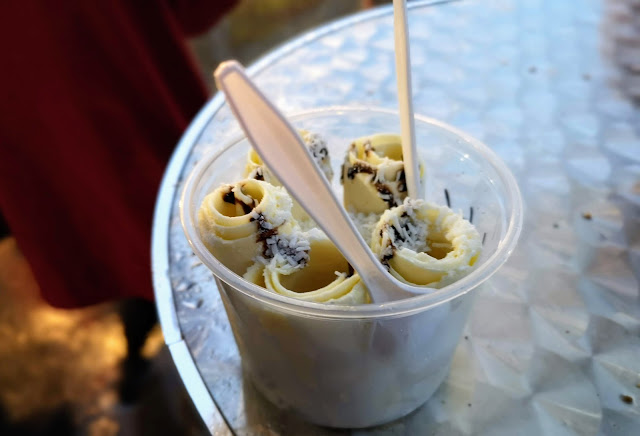 Thai Rolled Ice Cream made my must have list as soon as I found out that it was here! I only last week, listened to a podcast about its migration from Thailand and have been keen to learn more. This was delicious with mango flavour folded into the ice cream as it is made right before you! 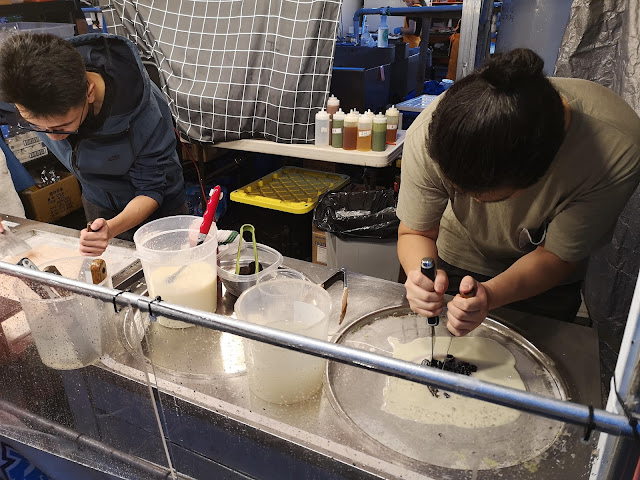 I wanted a light bulb. It was my plan to use the light bulb if we got into a poorly lit area of the market. 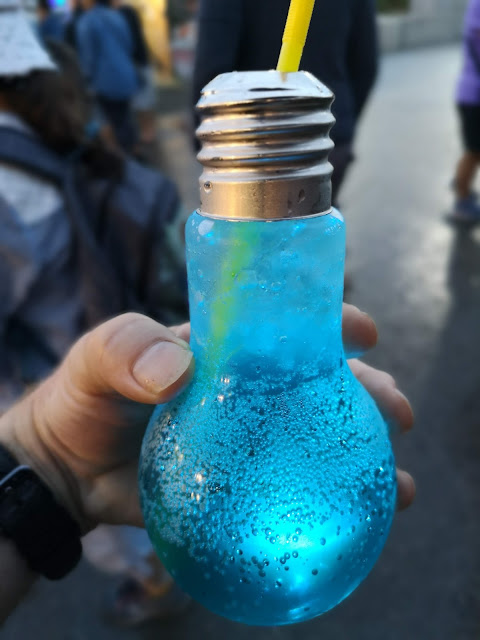 OK, so it wasn't quite bright enough for that! Blue is of course, my favourite flavour so I enjoyed this. 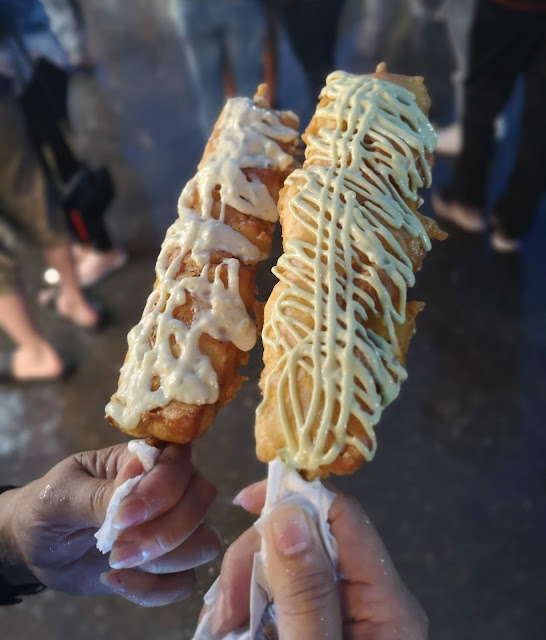 Fish Sticks. OK, we tried this last time also. This time with Wasabi Mayo and Tartar Sauce. At $13, I still find them to be one of the better deals at the market. Hot and crispy, the fish is not thick but there is just enough to get a taste. What is better than food that comes on a stick? 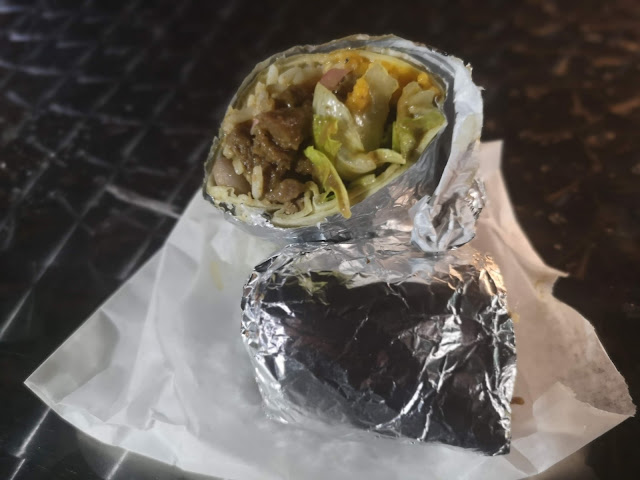 No wonder I spend so much money at the night market. Every new thing, I have to try. Some Filipinas have tapped the fusion market with burritos. This stand was called Star Burritos by Palate Catering. My photo of their booth did not turn out but remember that name. My burrito was Kare Kare (beef and peanut sauce) but you can get coconut chicken and other favourites. The burrito comes with all the extras that you expect from a Mexican burrito, beans rice etc. Very Nice! Finally on the way out, we came across a young fellow giving out samples of Pork Crisps! Free samples and crisp pork...need I say more? 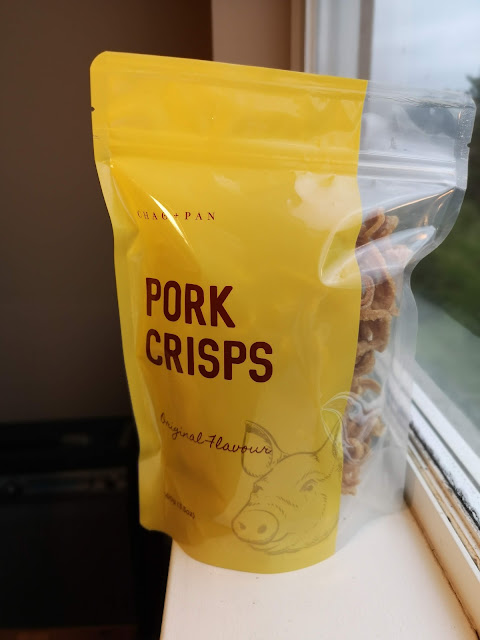 These are made by C + P or Chao + Pan. I know you are thinking chicharon or pork rinds but this is different. It is deep fried pork ears in small manageable bits! Delicious! Check them out on line. Their Lao products including sausages are readily available.
I had fun this rainy night partly because I got to say, "You aren't made of sugar. You won't melt!" often to the annoyance of my companions! As a life long BC resident, I always have umbrellas nearby. That's all it takes!
By Yes! We're Eating Vegan Again! at August 16, 2018
Email ThisBlogThis!Share to TwitterShare to FacebookShare to Pinterest