Marie's sister and brother in law are in town from Manila as is her aunt and uncle and none of them had never had dim sum! This was a situation that clearly needed a remedy and we decided that it was Western Lake Chinese Seafood Restaurant. I took the advice of bloggers and reviewers who suggested that a reservation would be a good idea and it was. We were seated promptly upon arrival despite the line up being out the door. I had perused the menu on line and we were able to place our order right away. Not sure what I was thinking there. I ordered enough for an invading army. Thank goodness for take out containers. 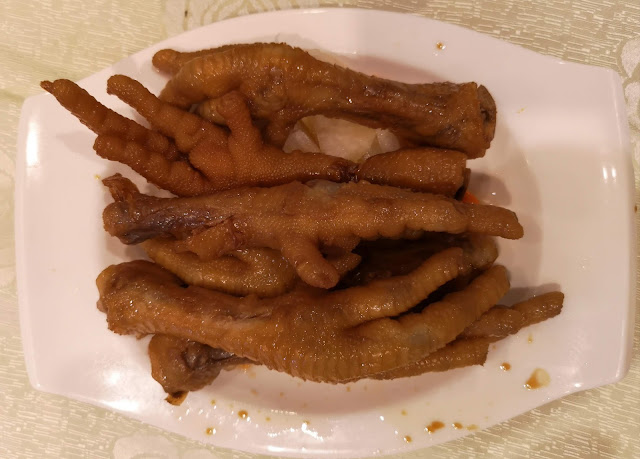 Japanese Style Chicken Feet were first to arrive. This was a cold dish and a little bit chewy. Interesting. I'm not sure what makes it Japanese style. 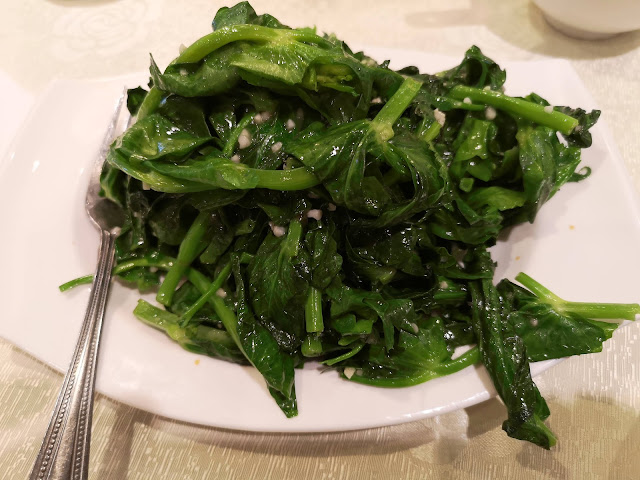 Pea Shoots Sauteed with Garlic. This was very tasty and garlicky. I had anticipated the need for something green and also ordered Gai Lan which never arrived (not a problem as...well you'll see). 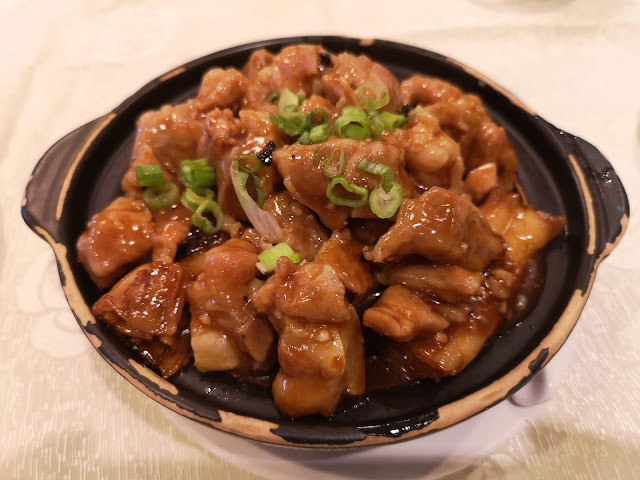 The Rice Flour Rolls in Hot Pot with Spareribs were delectable. Very tender and flavourful pork which was meaty and not all bone. A little less hot pot than I expected with little or no broth. 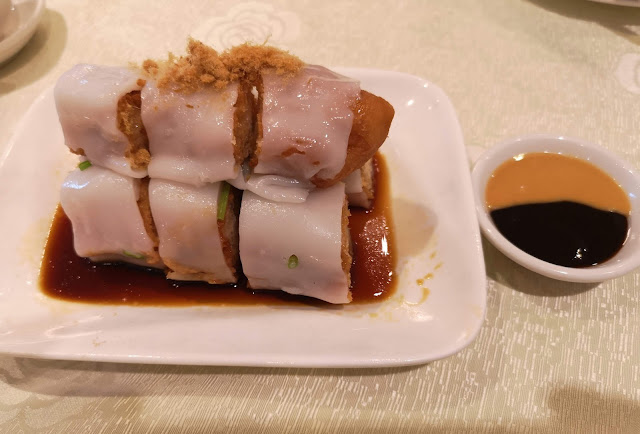 My ordering was maybe a little too rice roll centric as in addition to the hot pot, we tried one dish with Chinese donut (loved the pork floss on top) and one with minced fish. 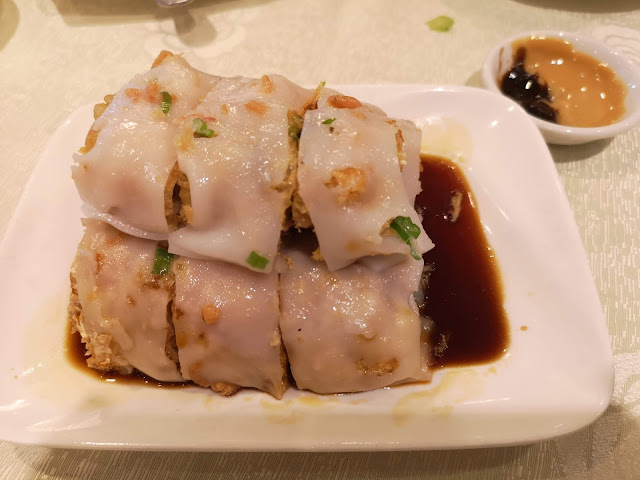 Actually, this was Bean Curd Roll with Minced Fish and was another hit. The minced fish was deep fried providing a crispy contrast to the silky bean curd wrap. 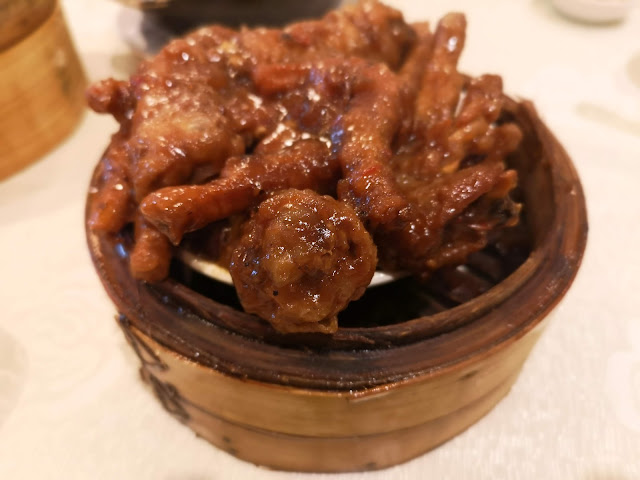 Can you ever have too many chicken feet? This was the traditional style, came in smaller more manageable pieces than the Japanese style and were wonderful. Worth the price of admission. 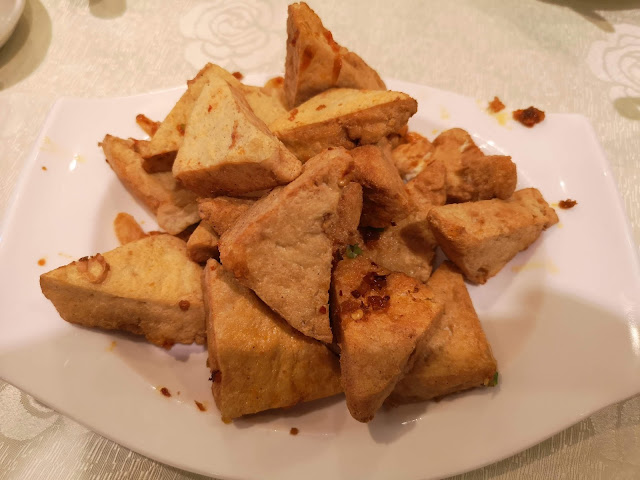 The Deep Fried Tofu with Chili Sauce was very nice. 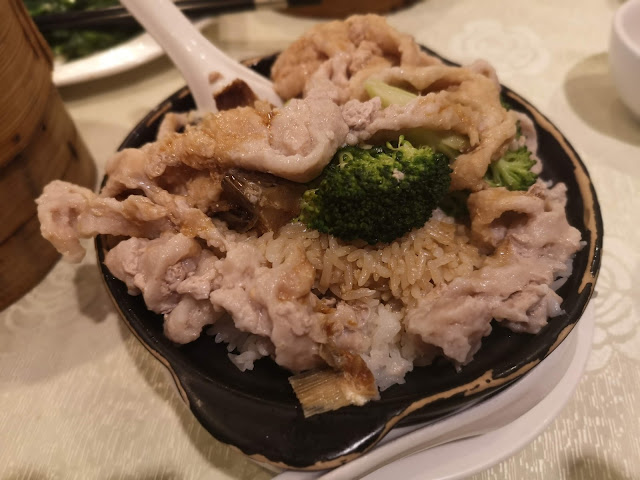 Steamed Rice with Pork Toro and Salted Fish. A little too fishy for my tastes but my Filipina partner tucked into it like she was still starving! 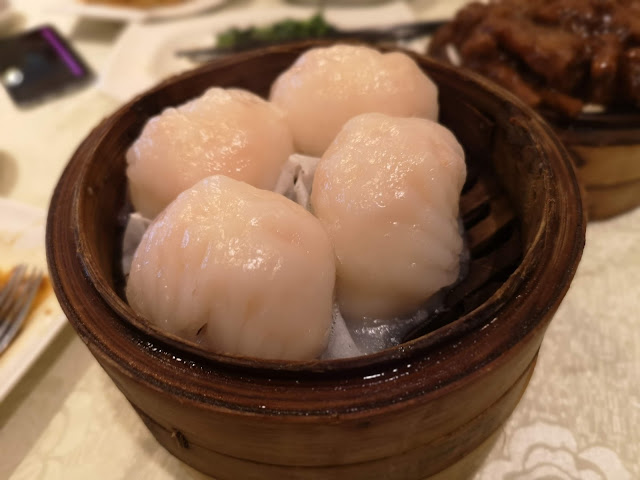 And finally, I knew I was in trouble when the Har Gow arrived. I could see from the menu picture that there were only 4 so I ordered two baskets. I did not anticipate that they were enormous. They were also amazing and despite all out leftovers (I am having dim sum again today...and maybe tomorrow), we polished these off.
Now on to the one bit of unpleasantness. I expect service to be curt in a place that is ridiculously busy. Despite that, the servers were accommodating and efficient, taking away empty dishes, answering questions and so on. However, my partner asked for glasses of water for us and she asked maybe three times. On the fourth request, it was her turn to be a little curt (It is water. We weren't asking for a special order to be shipped from Canton). Danny, (a manager ?) snapped at her that there were people waiting for tables and we were bothering them for water. That is a B.S. response my friend, even in a busy restaurant. It hurt Marie's feelings even though she acts all tough. I am not one to punch out a waiter but I can certainly tell the story to the 10 or 15 people who read my posts. Sorry, we won't be back!

By Yes! We're Eating Again! at August 14, 2018
Email ThisBlogThis!Share to TwitterShare to FacebookShare to Pinterest