We couldn't find any Indian restaurants open during Vaisakhi (actually, we didn't try very hard) but we decided to lunch at Taste of Punjab on Sunday to keep up the celebration's theme all weekend!

Just by coincidence, we drove past the restaurant on Saturday and so I checked out their Zomato rating. Apparently, this is the greatest restaurant in the world as everyone seems to rate it as a 5 out of 5! Either that or everyone  who rated it is a friend of the owners. Actually, scroll down a bit and in contrast to the 5s you see a few hostile ratings of 1 and 2!. Let's try to keep our emotions in check people! Few restaurants deserve either a 1 or a 5! To be so extreme only confuses people like me. In the end, we have to find out for ourselves whether the restaurant is  good or not! It's a tough job but we are up to the challenge!

We started with a Mixed Snack Platter which was a nice assortment of different pakora and a samosa. We found all of them to be tasty, just salty enough, and obviously the pakora were freshly fried. The accompaniments were the usual tamarind sauce and a mint chutney. Here is where it got a little weird. The chutney was very bitter. I was not in a hurry to dismiss it as a problem. I am open to bitter flavours and asked our server if there was bitter melon or some such ingredient making this a variation on the typical Mint Chutney. I am afraid that I only confused her. Later I googled the question and learned that the mint stalks may turn a chutney bitter. At any rate, it was not supposed to taste like that....deduct points (especially for not addressing the problem when it was brought to the servers attention)! 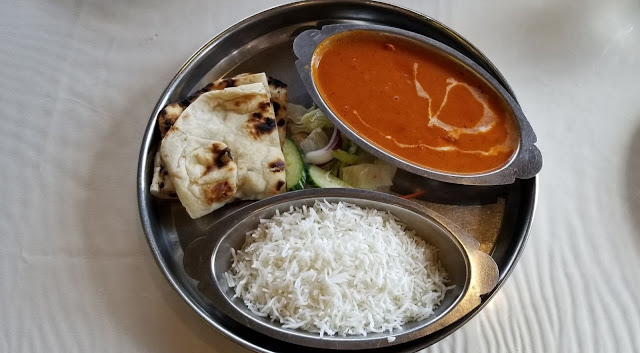 Next up was Butter Chicken Thali. We found that their was a fair bit of tender chicken just under the surface. I still feel like this dish could be served by everyone as chicken with sauce rather than sauce with chicken but this plate at $10.49 including naan, rice and salad is not a bad deal.

Finally, trying to branch out from my usual lamb, we decided to try Masala Fish. This came with rice and was a very tasty dish. Lots of vegetables that were cooked just right and a rich sauce that made this very comforting!

Our server was friendly enough. I confused her again by asking if Taste of Punjab is a family run business. Still not sure of what the answer would be. Service was not speedy to the point where I almost got up to ask if they had forgotten about us. The place could have been a little cleaner. Our table cloth (over the edge of the table) bore serious evidence of what the previous diners had enjoyed. But still, we were comfortable and enjoyed our meal, other than the mint chutney thing. I might not be so picky if it were not for the ridiculous number of 5 ratings on Zomato. This restaurant is a solid 3 or 3 1/2 and perfectly fine.

By Yes! We're Eating Vegan Again! at April 25, 2018
Email ThisBlogThis!Share to TwitterShare to FacebookShare to Pinterest