Nothing spells spring, when BC residents slowly crawl out of their winter dens and desperately search for the sun (smirking to themselves in the knowledge that the rest of Canada will not be following suit for perhaps many weeks) like Cherry blossoms. Sakura Days at VanDusen Gardens celebrates Japanese culture...and lets us enjoy some Cherry blossoms at the same time.

This year, the sun poked through the clouds occasionally as we strolled the grounds but there had been enough rain in recent days that wandering too far off the paths occasionally led to getting wet socks.

We listened to some lovely music, read some Haiku and I even attempted calligraphy when invited to do so. I have opted not to display the results here as I'm afraid that my attempt to write 'cherry blossom'  might be mistranslated, possibly even as something insulting!

Well, we might have come for the food also! A few food trucks were set up on site

Mogu Japanese Street Eats was very much on our radar. It turned out to be both thrilling and very disappointing. We tried their Sweet and Spicy Karage Chicken which was amazing! Sweet and slightly spicy as advertised but also hot and crispy! Unfortunately, they didn't offer anything else!

Thats not to say there were no other trucks on site. We had a Yakisoba combo (with beef) from Teriyaki Boys. It was tasty enough and the noodles were great. No bargain at $12 but I think I don't think we expect bargains at festivals and from food trucks, do we?

From Zakkushi, we had 3 Teriyaki Chicken Skewers Sweet, with a nice little char, these folks had one of the busiest booths at the show. And close to a bargain at $6! 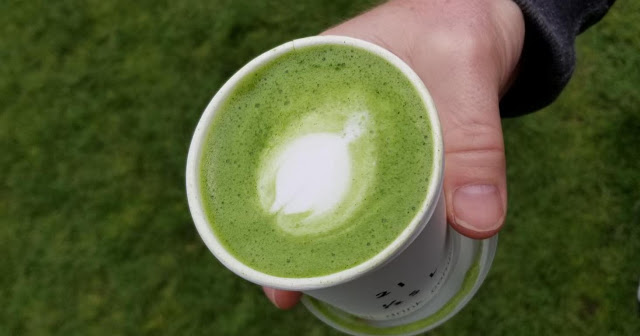 And finally, as it was chilly on Sunday morning, we tried a Green Tea Matcha from Ichyo's. it was very pretty and warming but a little too seaweedy for my tastes. Yes I said seaweed! I did a little reading (not a huge Matcha expert) and that flavour can be the result to too much heat or whatever or, it could just be the taste that is intended! I just don't know about that. All in all, a lovely few hours in a beautiful garden with some decent east too!

By Yes! We're Eating Vegan Again! at April 16, 2018
Email ThisBlogThis!Share to TwitterShare to FacebookShare to Pinterest