Although we have kind of nibbled around the edges a lot, it has been a very long time since we actually walked around what I would call the heart of Chinatown (Main to Gore between Union and E Hastings). I knew it had been changing but I was a little shocked to see a hipster barber shop, coffee shops and other decidedly non Chinatown businesses. Somehow it always seemed OK for Starbucks to be on the west side of Main but I was aghast to see Tim's on the east side. I wish Carol Lee and others who are dedicated to keeping the spirit of the area alive, success in their efforts to keep Chinatown as Chinatown (her Chinatown BBQ is further west on East Pender but still very much within Chinatown) . 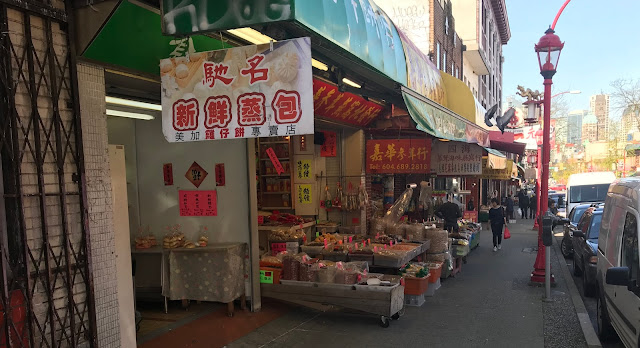 After toodling around in the surprisingly steady rain (we were obliged to buy an umbrella), we ended up at Fat Mao. Not a long established local business but somehow keeping with the spirit if in a more modern version.

A smallish place with a short but interesting menu, Fat Mao is one of Angus An's group of creative eateries.

The menu leans towards Malaysian and we started with the Roti with Curry. No huge breakthrough here but it was tasty enough.

Its a good thing that this was a rainy ugly day outside because that's what this food is made for. I tried the Hot and Sour Pork Noodles which were wonderful. 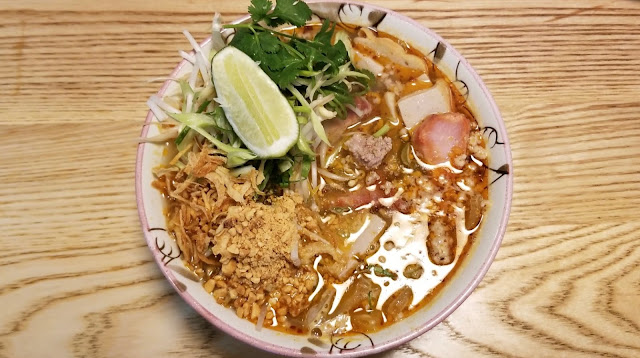 There were 3 kinds of pork in the soup; ground, sausage and barbeque. I chose rice sheets for my noodle and these were brilliant. They were about an inch wide, almost translucent and had a wonderful chew to them. Eventually they seemed to absorb most of the liquid and became even tastier. There was just enough spice to make me sweat a bit and the sourness of the broth was fantastic. Garnished with peanuts, fried garlic and cilantro, this is one of those dishes that I expect to rave about to anyone who will listen! 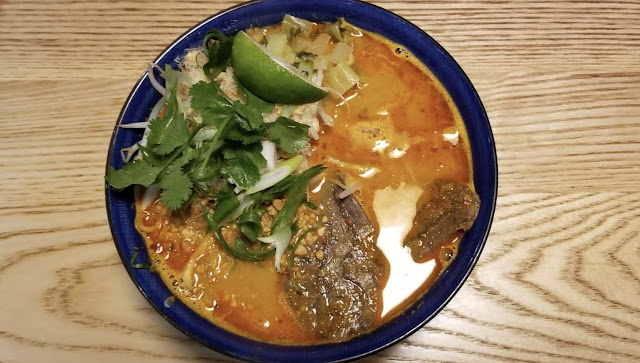 Marie (also known as Laksa Girl) had the Southern Thai Beef Laksa, a slightly different version with the main difference being, obviously, tender beef shin, and a fairly generous amount. This was also on the spicy side and nicely cocnutty. Very good! Service was accommodating and friendly and the space is comfortable but casual. So far, I have been to two of Chef An's restaurants but suddenly it is my goal to visit them all! 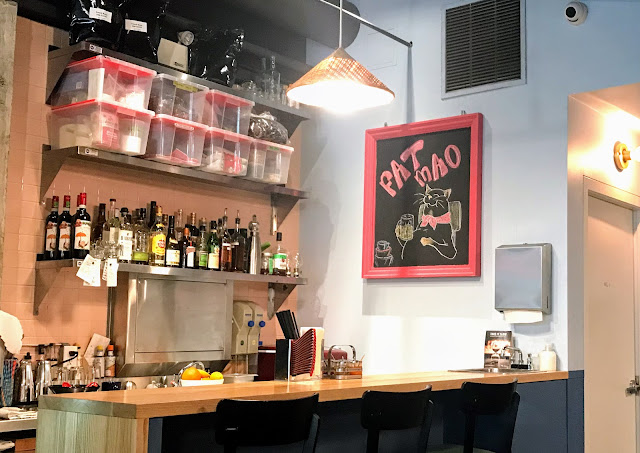 BTW, if you're very tall, I notice that the front door at Fat Mao is about fourteen feet high. No need to duck your head!

By Yes! We're Eating Again! at April 30, 2018
Email ThisBlogThis!Share to TwitterShare to FacebookShare to Pinterest