We did not come here expecting the Richmond Night Market. If you do, you will be disappointed. There are no dinosaurs and no midway. There was also no huge lineup to get in...which is a bonus. The market happens every second Thursday at the Waldorf Hotel parking lot. We took transit but parking would probably be easy even if traffic sucked. 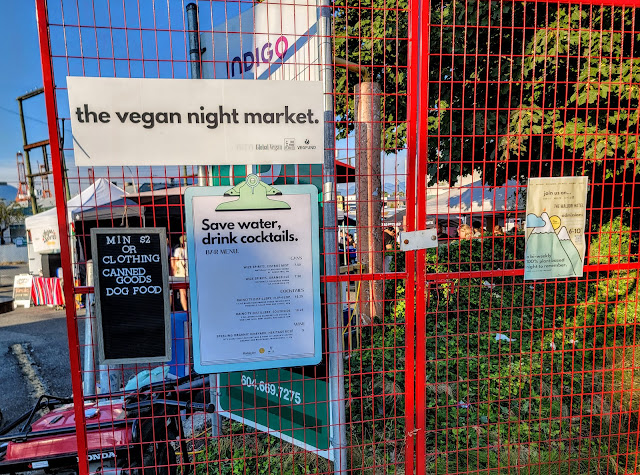 What we found was a pretty chill group of people, eating, drinking, and listening to music. People who are concerned about practicing kindness to animals and our planet (well, I assume so anyway)! There were 3 food trucks and some additional food vendors as well as maybe a total of a couple of dozen vendors of one thing or another, mostly vegan related. 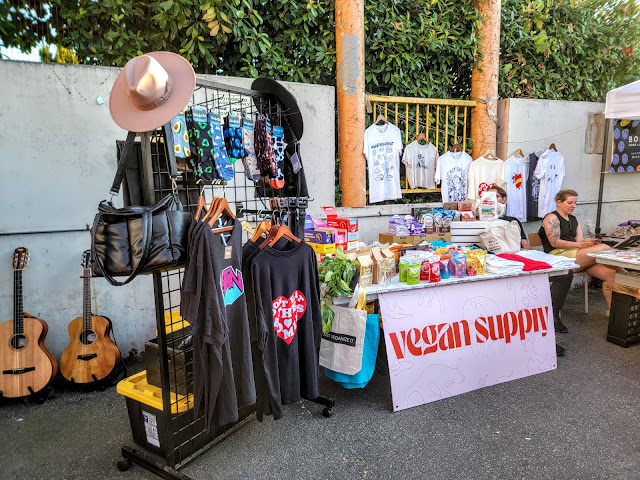 If you wanted a t-shirt or even socks that reflect your thoughts on the plant-based matter, they were certainly available as well as surprisingly, someone who would tell your fortune (pretty sure that's not a strictly vegan thing). 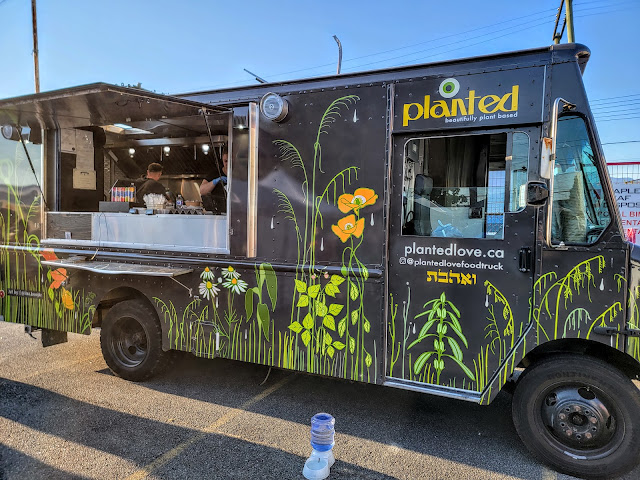 One of the folks working at the Planted Love Food Truck leaned out and offered us a sample of their falafel which turned out to be some of the best we've ever had! Surprisingly, we did not order falafel but a couple of other things that had already caught my eye on their menu. 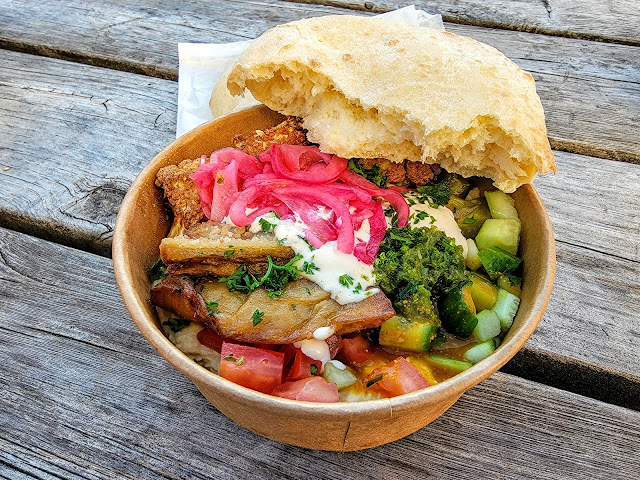 And this is what we call a bowl! This was the Sabich Bowl with pita which, among numerous other things, featured fried cauliflower and eggplant. It was accompanied by housemade fluffy amazing pita and was a bargain at $14. 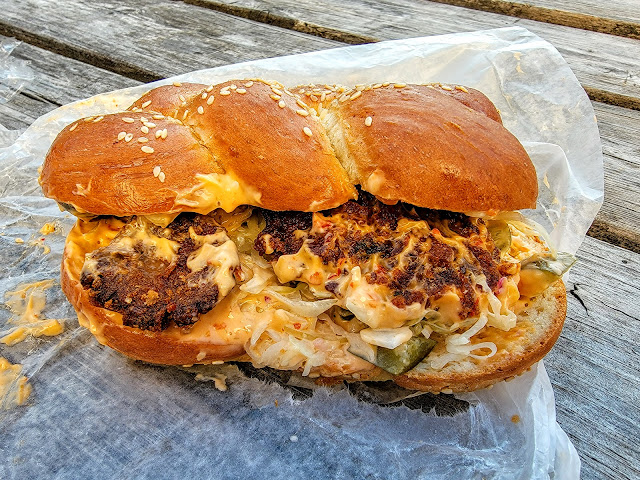 The messiness of this picture was unavoidable but the Fried Oyster Mushroom Sandwich on Challah was delicious! We would order this again in a second! It was slightly spicy with harissa aioli, slaw and pickles. The fried mushrooms were crispy and rich. The bread was made in-house again, using aqua faba instead of eggs. Brilliant! 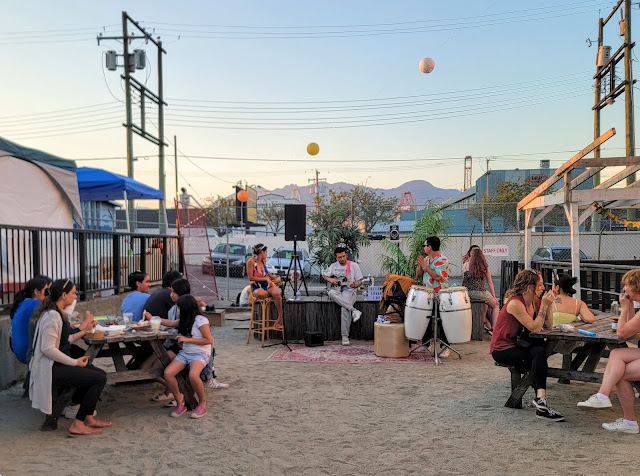 We enjoyed our food and the music at one of several picnic tables here on the beach. You could enjoy an adult beverage thanks to the Waldorf if you so chose. 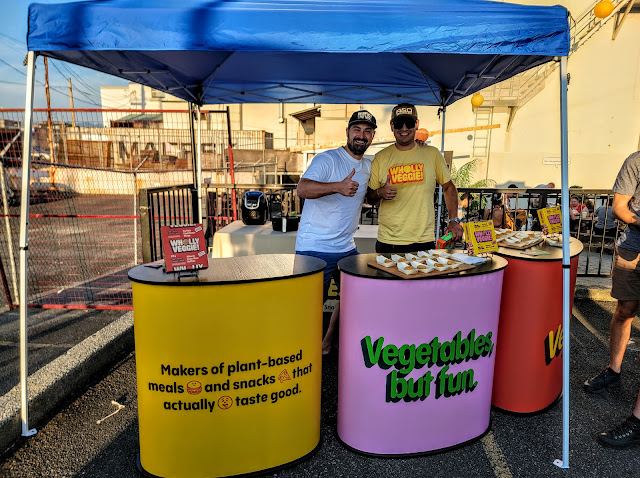 After finishing our eats, we went a wondering again and came across these guys who had 'mozza' bite samples that we great! We came across Wholly Vegetable products in our Aldergrove Freshco later in the week (I like saying 'wooly' vegetable which is fun but it is actually 'holy' vegetable...I guess you knew that) and I will be posting that on our Insta at some point. 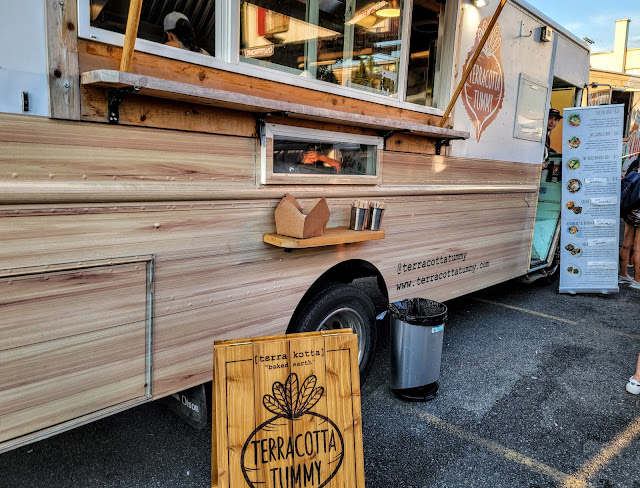 Terracotta Tummy is another impressive vegan food truck (btw, the third truck was Veg Out which sported long lineups for their amazing 'Chicken' etc. We have tried their delicious food before). We will try more off of TT's menu in the future but this evening we tried The Lox Box. 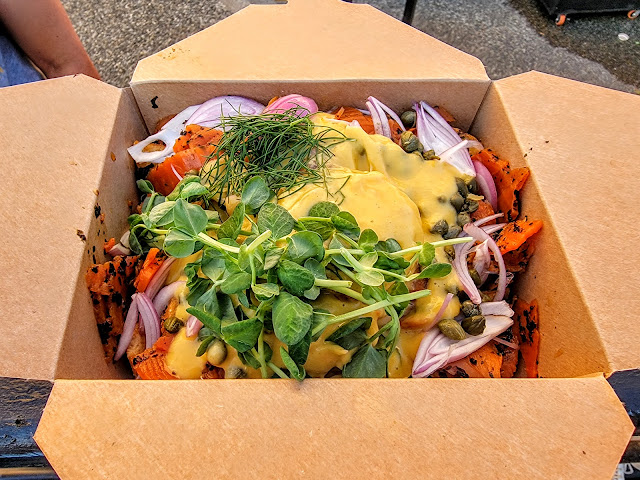 Their boxes feature a base of really good wedges (they call them hashbrowns which is perfectly fine) with lots of carrot lox and hollandaise, dill capers, shallots and pea shoots. Such a delicious mess when the hollandaise and get this...vegan yolk... are all mixed together. 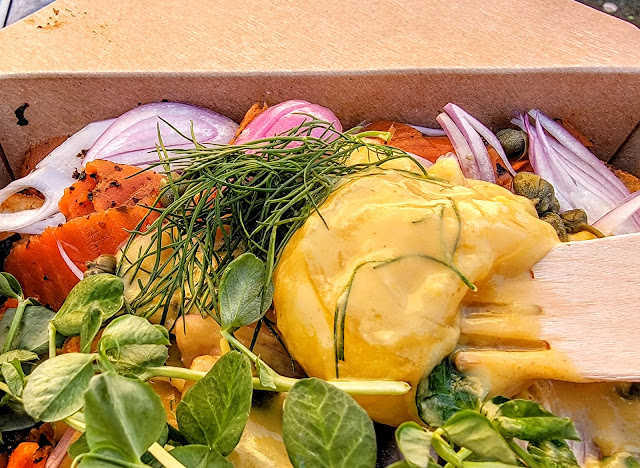 I have no idea how they made this (I didn't ask as I'm sure it's pretty much a secret). The big wins are both in texture and appearance. As far as taste, I got more egg white than yolk but it still contributed to the luxuriousness of the whole deal! Nice! 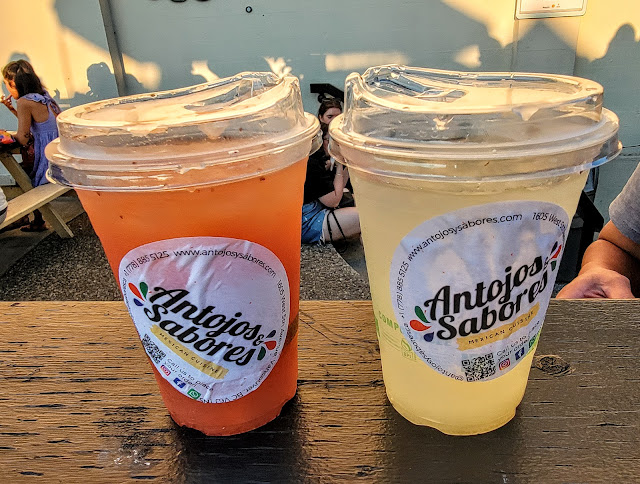 We enjoyed a couple agua frescas from Antojos y Sabores (hey! they have vegan tamales!) and enjoyed some more tunes!
The great thing about this night market was walking around knowing that I could eat anything without having to narrow down my choices. I wouldn't have to ask if there were anchovies in the kimchi or egg in the Challah! This is a great little market and we will visit again in the summers to come!
You have one more opportunity this year on September 8!
By Yes! We're Eating Vegan Again! at August 28, 2022
Email ThisBlogThis!Share to TwitterShare to FacebookShare to Pinterest