Just as a plant-based diet helps mitigate the effects of climate change in a huge way, so reducing the number of single-occupant vehicles on our roads can be a huge step forward in solving what has become a dire situation. This will affect our children and grandchildren in a devastating manner if we don't continue making changes. It's sad that science denial has become a political thing to a large extent but if you still believe that climate change is not a real thing then you need to get your head out of your ass and start reading some peer-reviewed scientific studies. Sorry! Let's get back to Car Free Day New West! 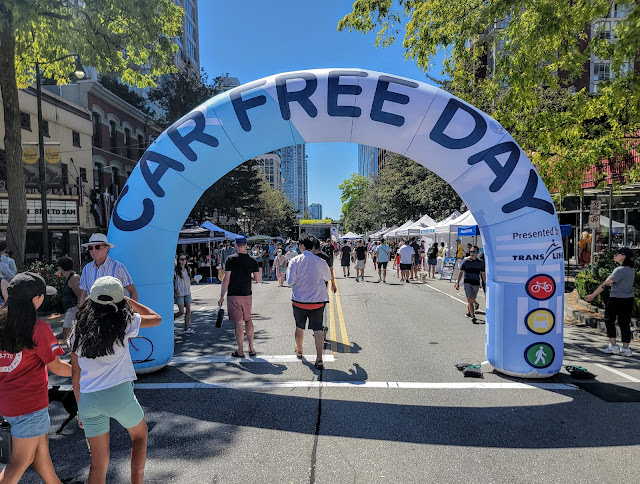 We were welcomed by the balloon arch as we got off Skytrain at Columbia station (how ironic would it have been to have driven here?) Just so you know, Mharie and I always drive to Scott Road Station and take transit from there. Mind you, we drive an electric car so we could in good conscience drive to most places but we would still be contributing to congestion. 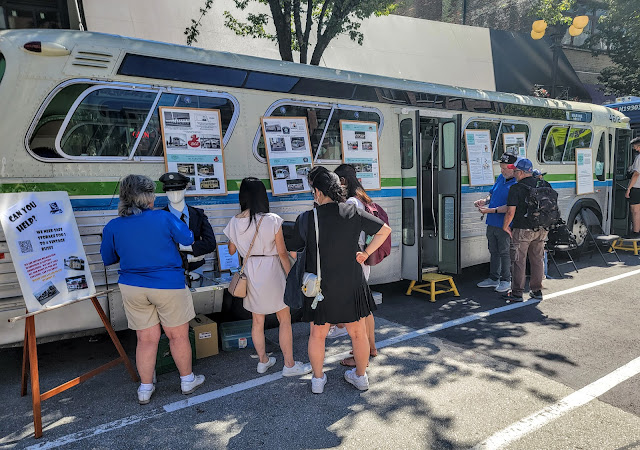 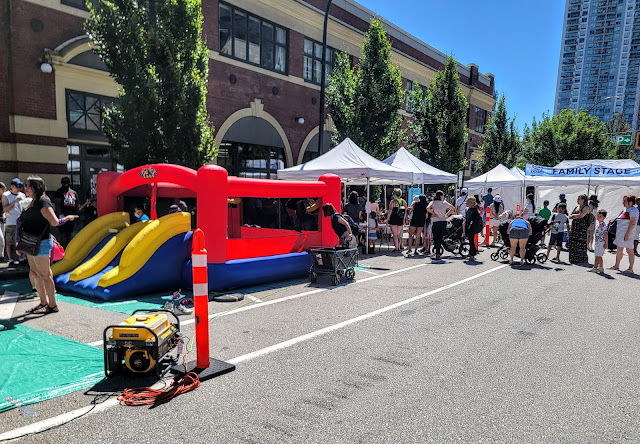 The exciting bus display was not the only thing available to attendees. There was a whole section for kids which included displays of prestidigitation and a bouncy house! 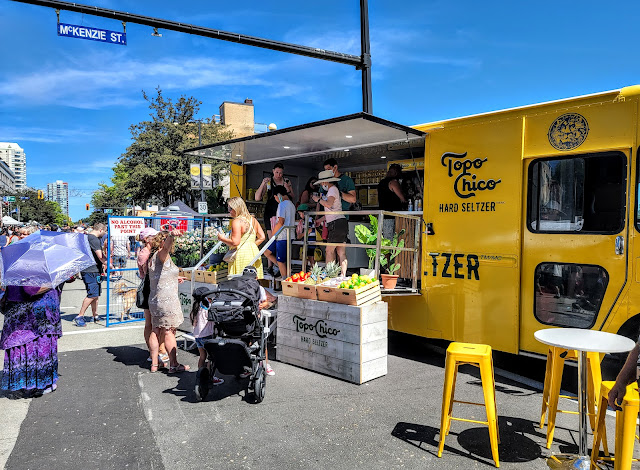 There were adult beverages available, presumably for those who had taken transit. It was not a blistering hot day (in fact there was a nice breeze) but a refreshing beverage is never a bad idea. 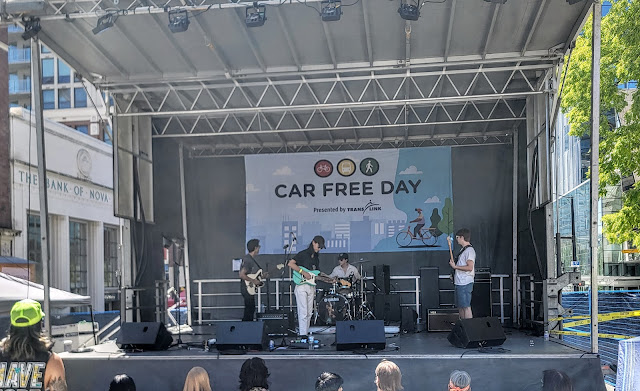 And there was entertainment from 4 stages! These young fellows are called Later Days. I immediately went to Apple Music and downloaded their EP! Very impressive!
Additionally, there were vendors of all kinds of clothing, crafts and so on. But you know that we really came for the food because the Columbia StrEat Food Truck Fest was also a part of this thing! 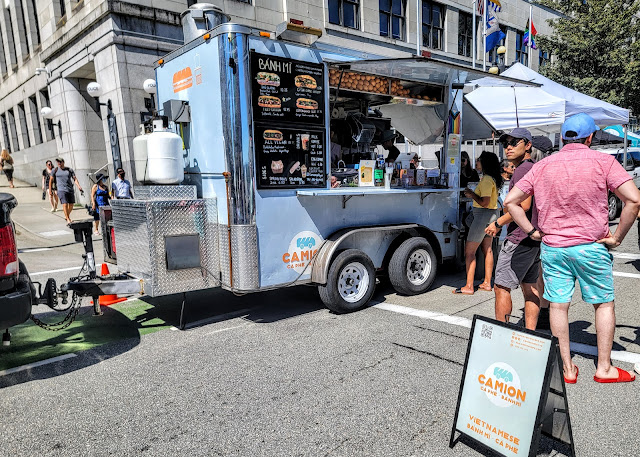 Choices at a food truck fest are always a little sparse if you are intending to eat animal product free unless an actual vegan food truck is present. Some research had revealed a couple of things and you can never go wrong with a banh mi. 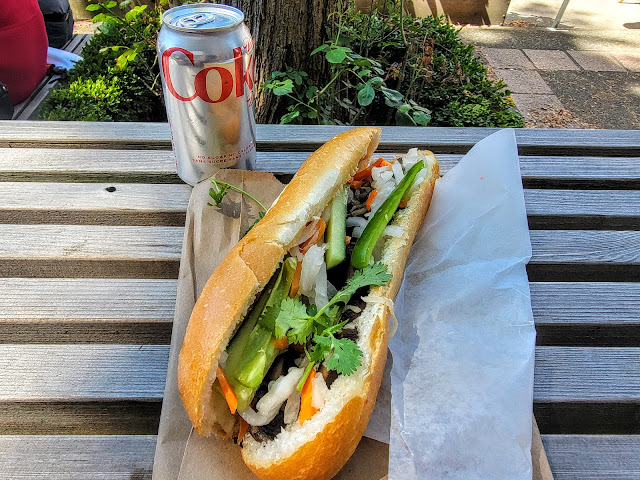 Camion Cafe offered an All Vegan Bahn Mi which featured portabello mushrooms along with all the usual good stuff. My wife was very impressed with the bun which was nicely crunchy on the outside. This was probably the bargain of the festival at just over $10! 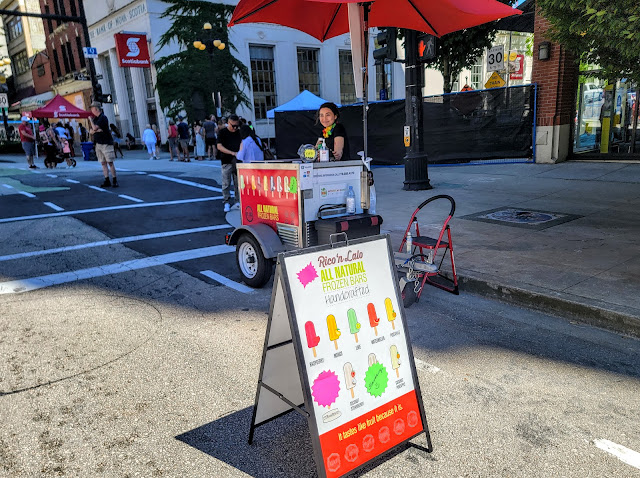 We also shared an all fruit popsicle from Rico n Lalo. 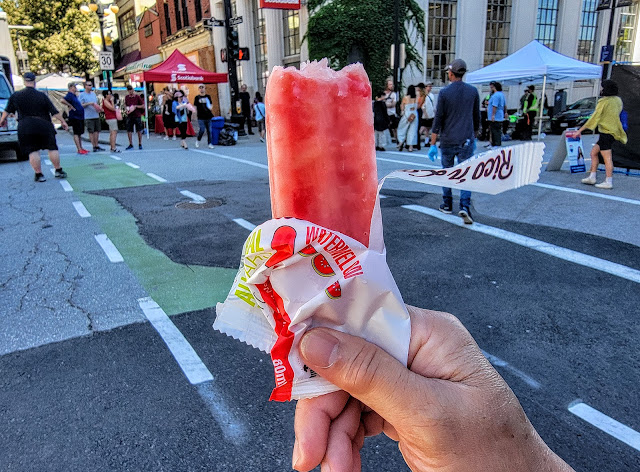 The watermelon bar was completely refreshing and even had little chuncks of fruit! 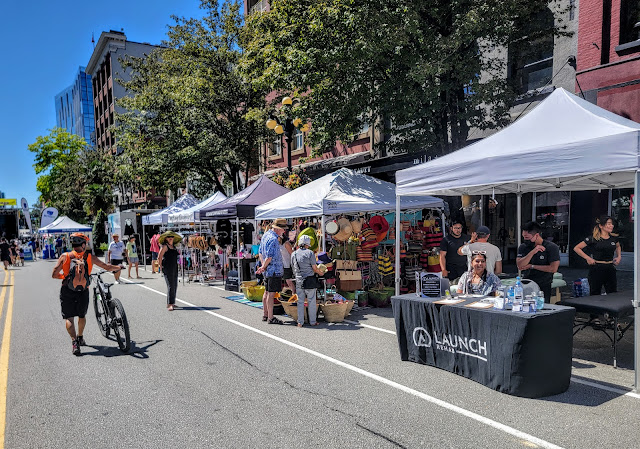 So, good food, good music, nice weather and a timely message. All of this added up to a decent way to spend some time on a Saturday afternoon. Nicely done Translink and The Downtown New West BIA!
By Yes! We're Eating Vegan Again! at August 07, 2022
Email ThisBlogThis!Share to TwitterShare to FacebookShare to Pinterest