For the 4th time in a month, we got ourselves out to a festival. Also, for the 2nd time in that month, we found ourselves at Town Centre Park (Lafarge Lake) in Coquitlam for one of those festivals, this time the first BC Dumpling Festival. 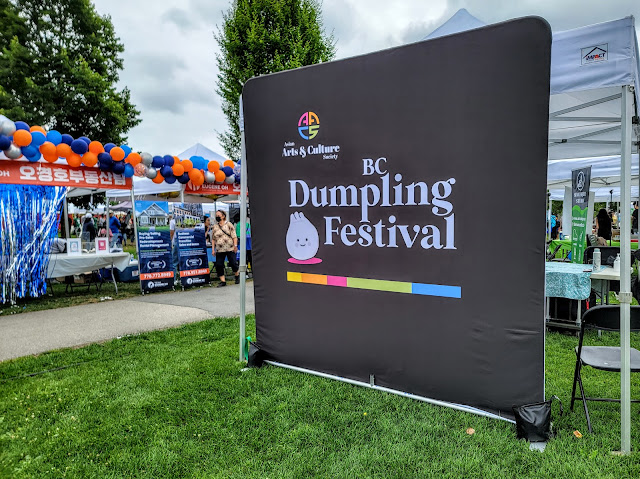 We have found that all of these festivals have been wildly popular and the crowds impressive. Presumably, this is because we were all going crazy after so many activities were curtailed during 2 years or so of pandemic. Whatever the reason, we were smart enough to show up as the festival started instead of mid-afternoon when the crowds (and lines) were at their peak. One more thing I might add to our festival strategy next time is to not only arrive early but to buy up as much food as we intend to eat as early as possible and then spend our time happily munching away as the masses lined up. 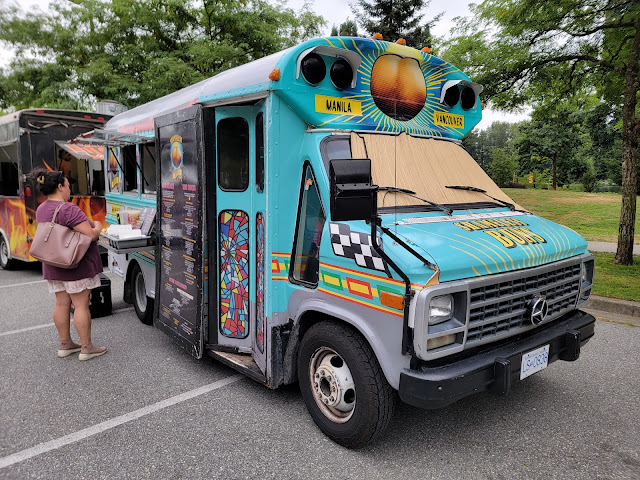 So we arrived at 11am, hungry as always and decided to visit our friends at Shameless Buns. 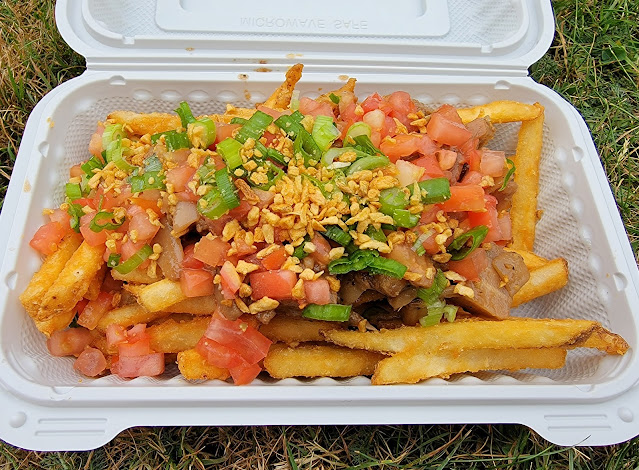 These days I am all in on the plant-based thing and so we ordered Jacked Up Coconut Fries which were both delicious and can be ordered vegan! The fries served at SB have just a bit of a crispy coating which gives them a wonderful texture. The topping was also tasty and meaty thanks to jackfruit. By not topping the plate with the garlic-calamansi aioli this vegetarian dish becomes vegan. I would just like to remind SB that vegan mayo is now pretty available and I kind of missed the aioli! 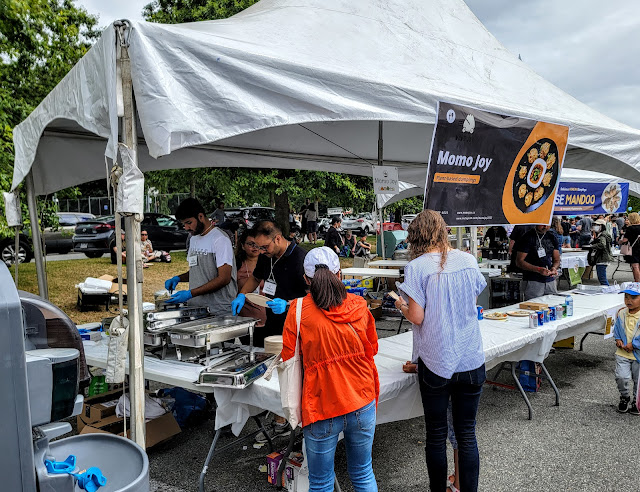 After getting our blood sugar up to an acceptable level, we looked around to see what else was available for the vegan. Sure enough, Momo Joy was serving plant-based dumplings. Those of us in line wryly commented that this was at least the shortest line at the festival, that being one of the greatest advantages of being vegan! 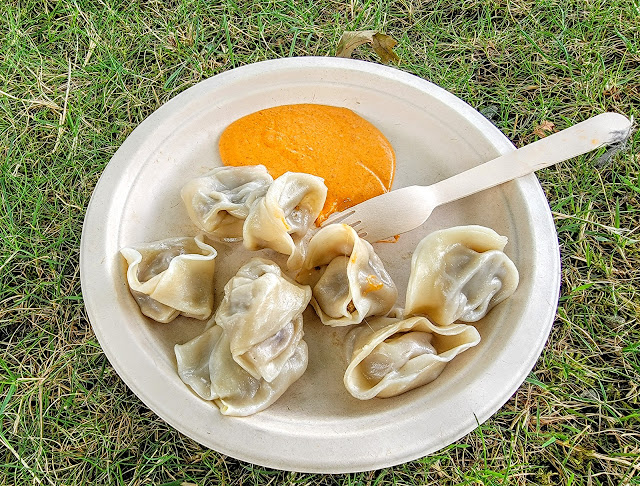 We ordered 2 plates of momos. One was plant-based meat, cabbage and onions, while the other was spinach and "cheese". As both plates looked the same, I will spare you the unnecessary 2nd photo. The dumplings were tasty enough and the sauce was good and even featured a bit of spice. These were obviously hand made but we found the wrapper to be either a little too thick or undercooked and overly chewy. It might just be that I don't know enough about momos and they are supposed to be on the chewy side. One thing for sure is that it was almost impossible for these folks (or any other vendors) to keep up with the hungry crowds so it is hard to judge their product in today's chaos. Momo Joy will be available from retailers, presumably soon. 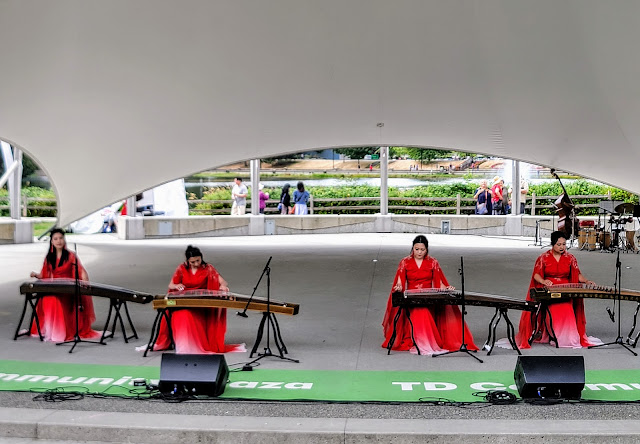 Today, the main stage was not occupied by steel drums (as at the Caribbean Festival) but guqin and guzheng among other things. I am no expert in Chinese music but considered this pleasant and quite beautiful! 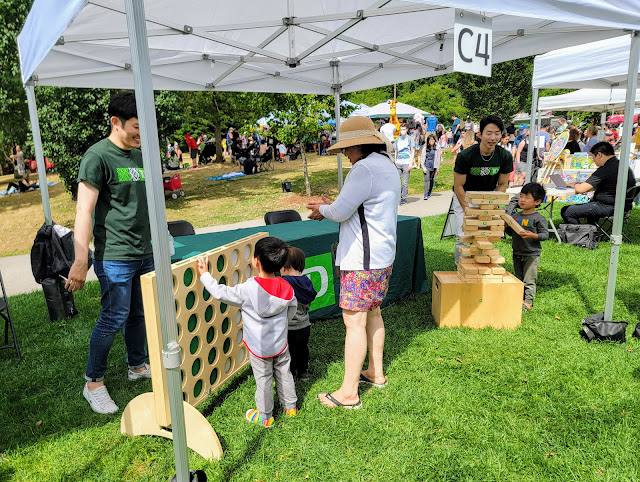 There were quite a few activities for the kids as well, in this case, thanks to TD bank. 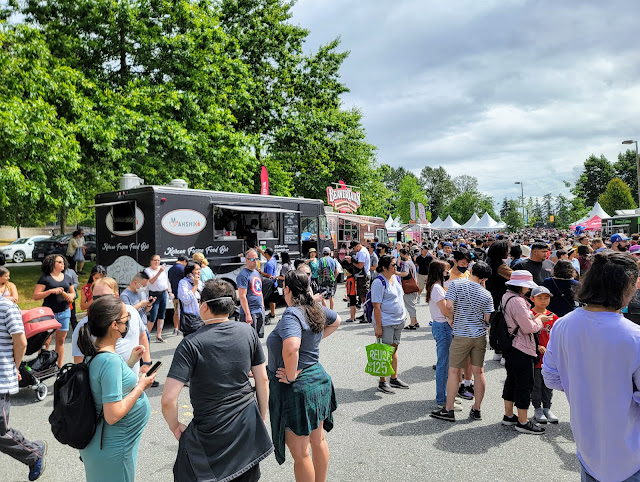 We took one last dive into the food vendor row before leaving. We did expect this to be a hefty time investment. That's OK though as we were here knowing that we could not be in a big rush. This time, my carnivore wife (no judgement and she can eat and do what she wants) wanted chicken and rice so we tried the Mashik Korean Fusion Food Truck. 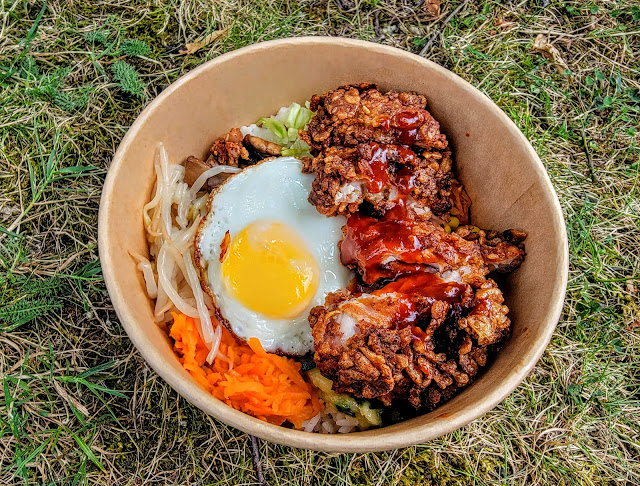 She seemed pretty content with the results. This was Fried Chicken Bibimpap and the chicken, egg and vegetables all rested on a bed of rice. 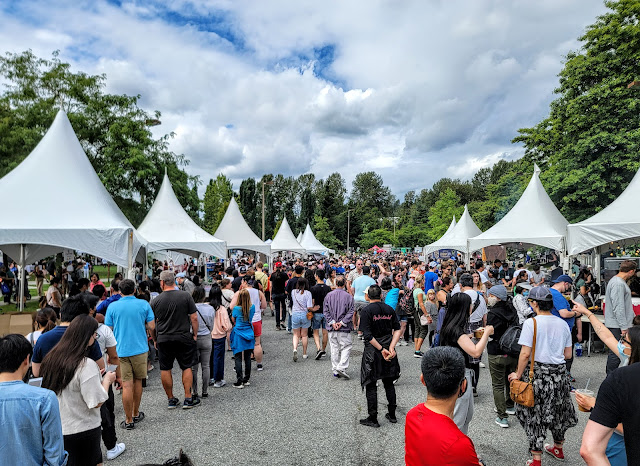 So the food was great, the entertainment was nice and even the weather cooperated. Well done to the organizers! We look forward to next year's festival!
By Yes! We're Eating Vegan Again! at August 17, 2022
Email ThisBlogThis!Share to TwitterShare to FacebookShare to Pinterest