Mharie and I have had some of our best meals at Asian food courts. I'm not entirely sure why that is. Is it because food court stalls are usually small and are obliged to specialize in a few things or a particular cuisine? Or is it because they are often family-run places with few employees who are invested and know what they are doing? Is it because to survive in a food court with so much competition they have to be on top of their game? Sadly, the same is not true of the big mall food courts which are mostly chain outlets and are frequented by folk who just need to get calories and don't have high standards.
Anyway, we have decided that reviewing food courts (on a semi-regular basis) instead of just the individual outlets would be a good idea. Admittedly, there will be a good deal less detail and we are not going to try to eat at every outlet, but maybe it will bring out the adventuring spirit in those that might have previously been content with Taco Time blase eats (although I always kind of liked their crispy bean burrito). Let's start with my oldest favourite, Richmond Public Market. 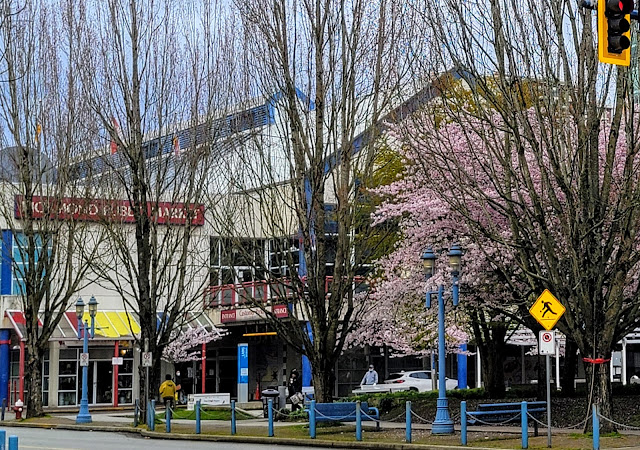 Not the greatest picture of the market or the cherry blossoms but this particular Sunday, we were obsessed with both! Located at the corner of Westminster Highway and Buswell, the first floor has all the merchants to supply your weekly grocery needs as well as a number of other conveniences while the second floor is roughly half sundry merchants and half food court. 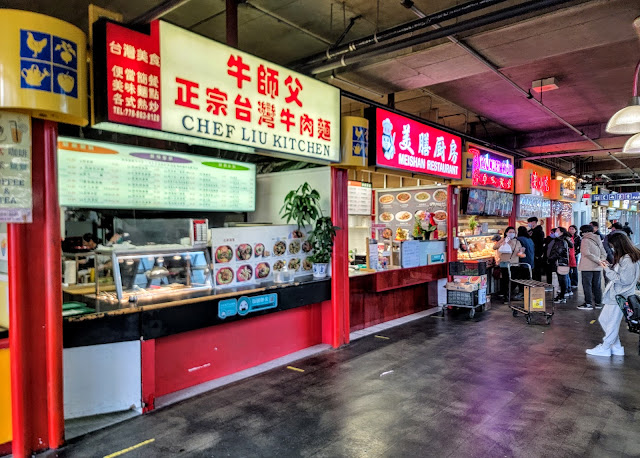 From memory, I think there are about 16 stalls at RPM many offering rice and noodles with 2 or 3 mains. Mharie got us a table and trusted me to find something that she would like. 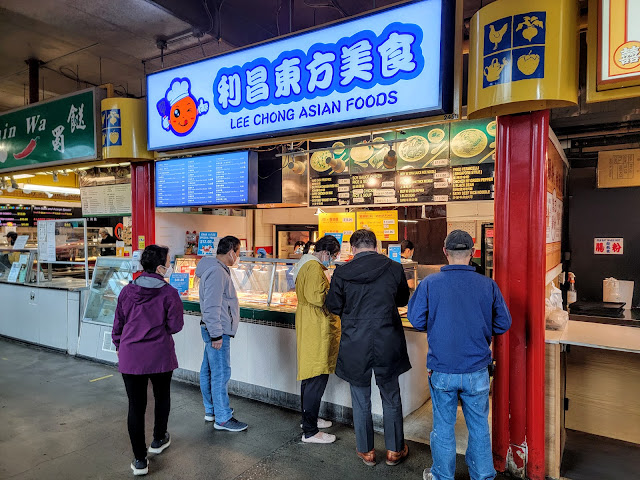 I notices a pretty significant lineup at Lee Chong Asian Foods at one point (always a good sign) but when I was out hunting and gathering, the line had temporarily disappeared! I took advantage of the lull. 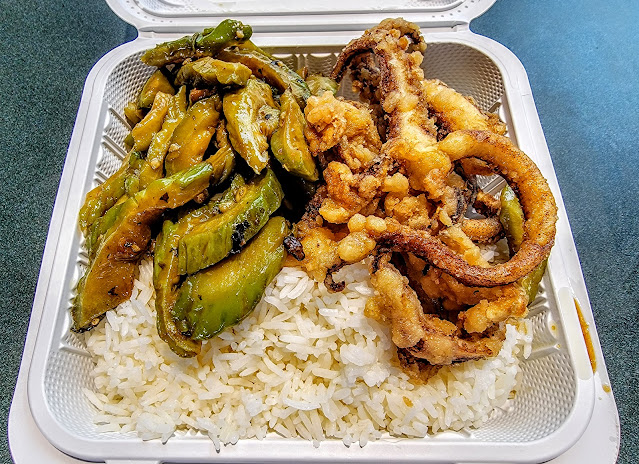 There is a pretty good selection of hot foods to choose from and Mharie loves deep-fried squid so that seemed like a good place to start. My second choice was bitter melon which lived up to its billing! This large plate of food was $12 (If I recall correctly) which is ridiculously cheap. You can be well-nourished and content for no more than that! 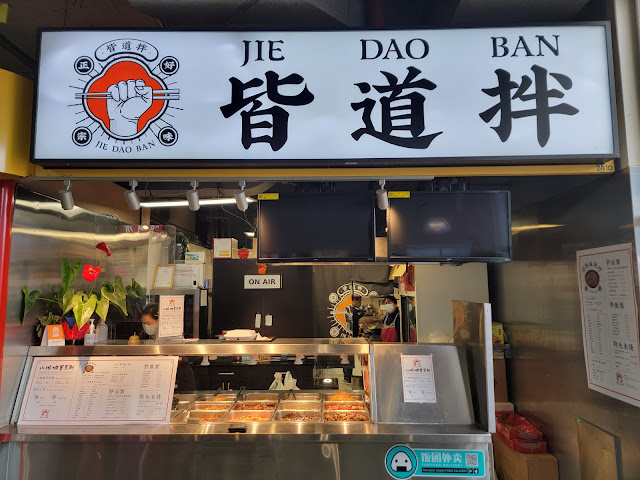 My stop at Jie Dao Ban was a little more confusing as our communication was entirely in gestures! I have no problem with that as we got it done. Evidently though, they specialize in Ma La Ban, a street food mix of ingredients you chose, with a spicy sauce. Unfortunately, the menu was entirely in Chinese and so I was excluded from that experience which makes me sad. Nevertheless, I came away with rice and 3 for only $13. 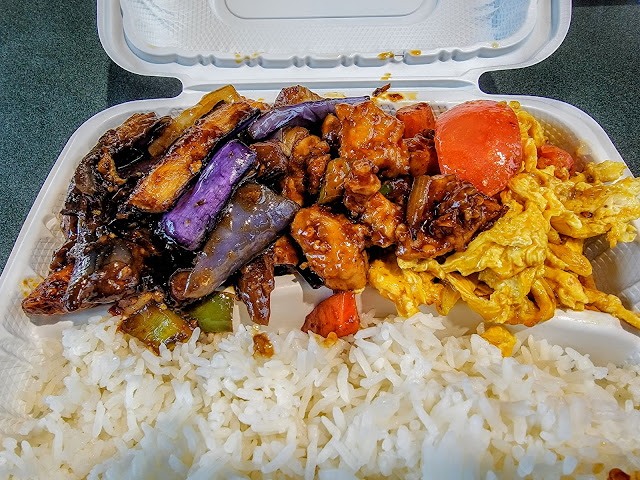 The colourful result was rice with tomatoes and scrambled eggs, a wonderful stewed eggplant concoction and a sweetish chicken dish. Everything was delicious. There are many stalls here that use this formula (rice or noodles with 2 or 3) which will have something to satisfy everyone. The woman who served me here indicated by gestures that 3 items for $13 dollars was a better deal than 2 for $12 and I agreed! 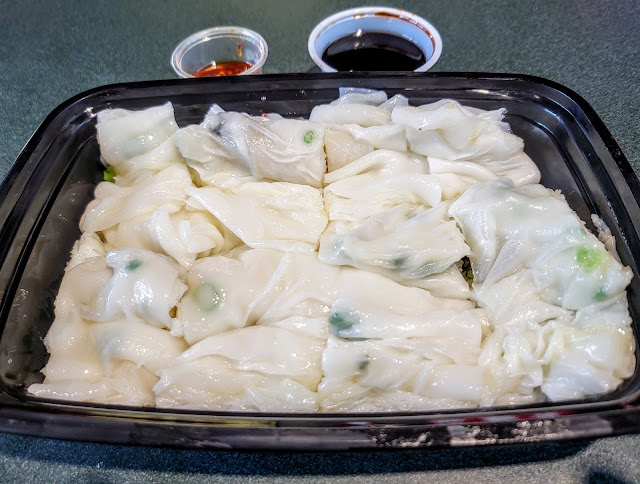 A few places like Hei Hei Rice Roll are a little more specialized with shorter menus (sometimes with many options). They also serve congee here but they had run out for the day! It must have been good. We know for sure that the rice roll was spectacular! This was Rice Roll with Fish Filet and we were amazed by how much tender fish was hidden in here. The rice roll itself was so delicate! 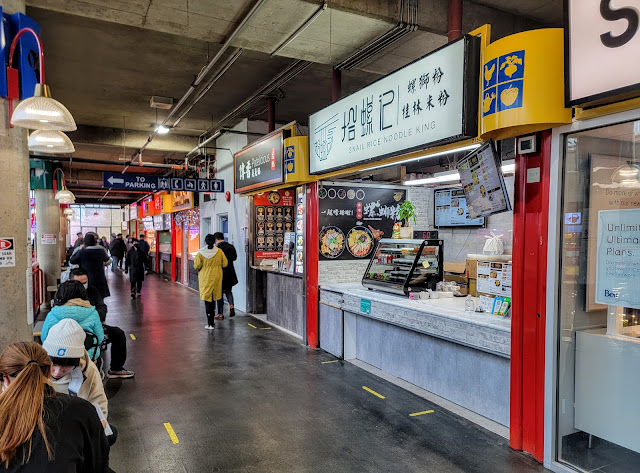 Our final taste was from relatively new kid on the block, Snail Rice Noodle King. Snail rice noodles are noodles cooked in a broth of river snails and pork bones and I'm not sure if that's what we actually had. 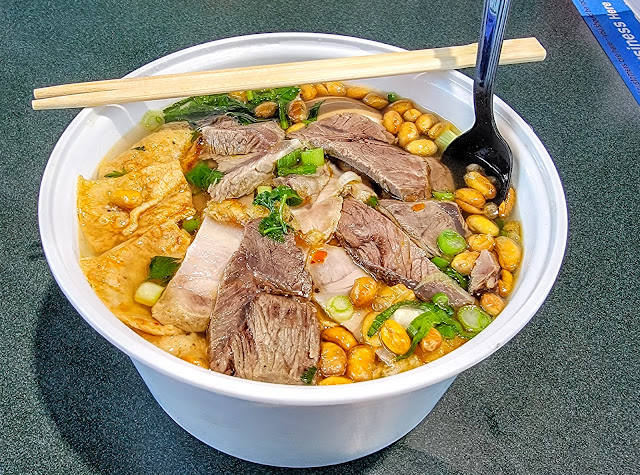 We ordered their Crispy Pork and Beef Rice Noodle which was full of peanuts, tofu skin, noodles, beef and pork and was quite good. We detected a taste which we concluded was intestine but it could well have been river snail...I should have asked. The taste was quite subtle and was fine. Definitely an acquired taste, I am personally not a fan of intestine but as I mentioned....subtle was OK. There are quite a few interesting items on their menu but they don't have the rice and 3 thing. 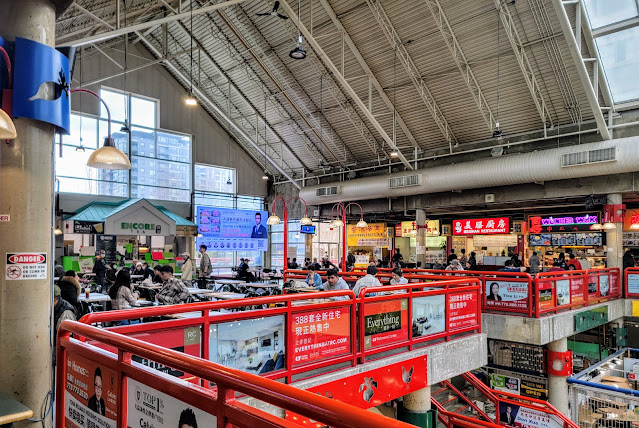 You could eat something different and delicious every day of the year at Richmond Public Market and it wouldn't even set you back that much. There is lots of seating and you should always be able to find a spot. Parking could be worse. Be patient and careful and you will be able to get free parking in their parkade. We prefer to pay a buck or two for street parking or even take the sky train and walk a couple of blocks. Take your time to decide on something good to eat but even if you just walk up to the first place you see and order, you will do OK!
We're not sure when we'll do our next food court review but stay tuned!
Food                 4 1/2 out of 5
Service             3 1/2 out of 5
Comfort            3 1/2 out of 5
Value                5 out of 5
By Yes! We're Eating Vegan Again! at April 02, 2022
Email ThisBlogThis!Share to TwitterShare to FacebookShare to Pinterest