Well, we have been to Grandt Kitchen previously but it was for a catered family event. I guess that should be a recommendation in itself but we decided to pay them a visit again during Filipino Restaurant Month to see them in action and find out about their everyday menu and service. 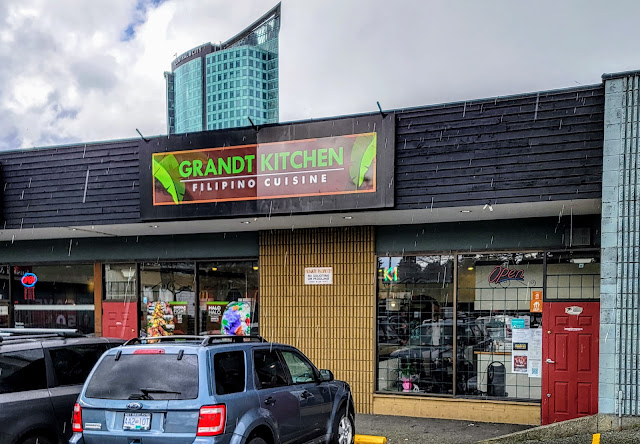 Located in a strip mall just north of Surrey Central on King George Blvd, parking was not an issue. We arrived just at noon on a Sunday and were seated right away. 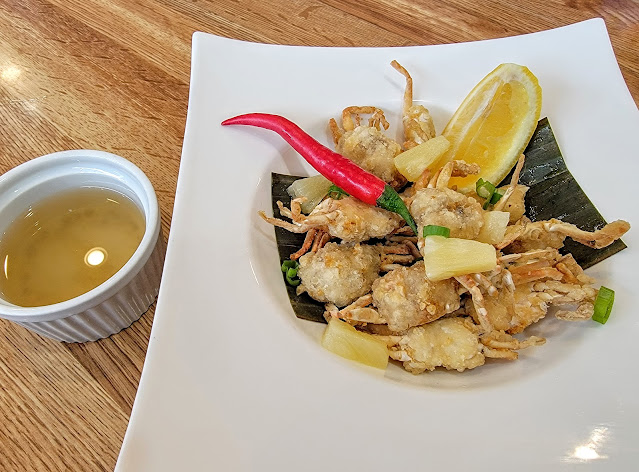 We started with an appetizer off their FRM special menu. I can't remember what they called it but it was deep-fried tiny crabs with a vinegar dip. These were tasty and crunchy but I would be curious to know their source. I have seen tiny crabs in Kimchi in H-mart but I have never tried them or questioned where they are from. I wish I had researched that ahead of time. 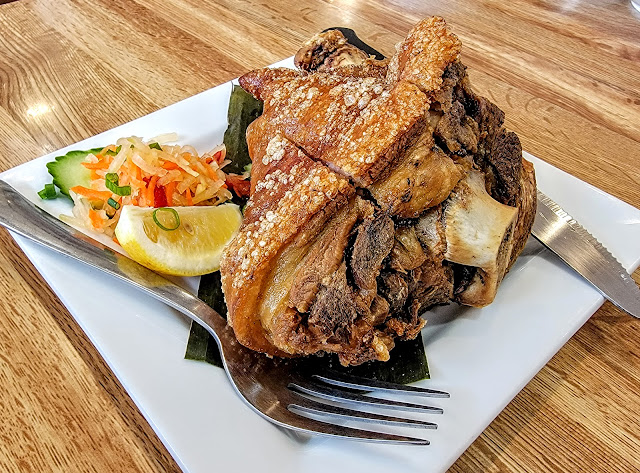 The one thing that we ordered off their regular menu was the Crispy Pata. Honestly, this must be one of the most unhealthy things in the world but it is so delicious. This is a pork hock slowly simmered and then deep-fried and is another example of using every part of an animal if you are going to use them for food. Meaty and fatty with crsipy skin, you should share it with multiple people! 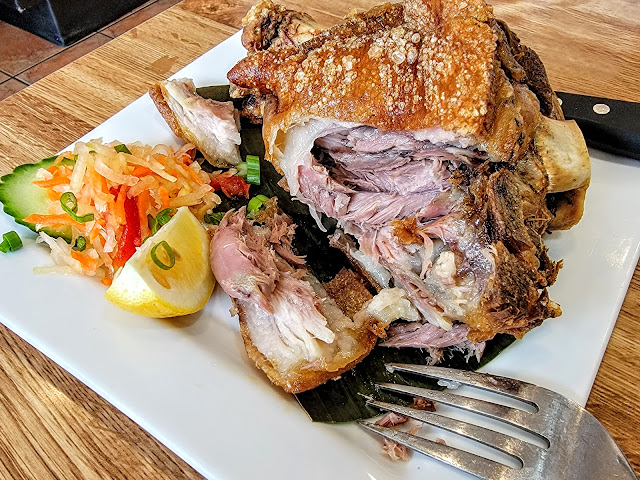 Served with a side of atchara, a Filipino pickle featuring unripe papaya which offsets all the fat. The skin was ridiculously crispy and the meat so tender. Don't miss this but go jogging in the morning in anticipation. 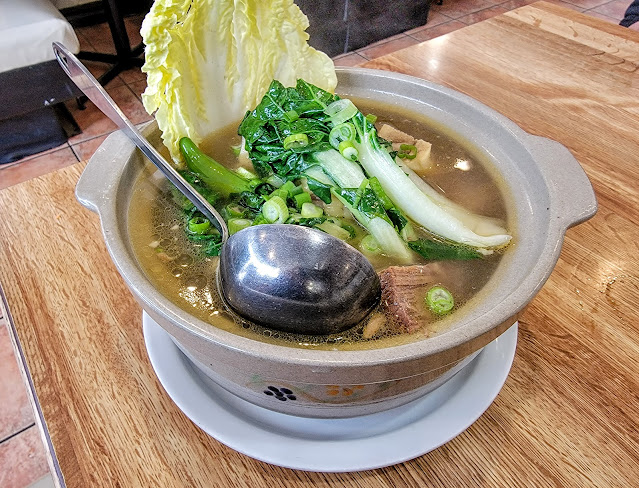 Bulalo is not a regional dish, but I expect it has local versions. It is a soup based on beef shank and bone marrow and there are entire restaurants that specialize in it in the Philippines. The broth itself is beefy, rich and fatty. Depending on your luck of the ladle, there maybe be generous pieces of delicious marrow. The beef in our serving was brisket-like (I don't know for sure) and so tender.  Add some greens and not too much else and you are set. This bowl was $25 but is enough for multiple servings. We took a lot home. The Filipino Restaurant Month's main offer to bring in the masses is an appetizer, main and dessert for $25. GKFC has certain dates for their specials but they bent the rules for us (and they probably will for you also). We chose the Grilled Pork Belly Combo which came with the relish, some grilled vegetables and steamed rice. The pork was ridiculously tender and very tasty and they were not cheap with the portions. 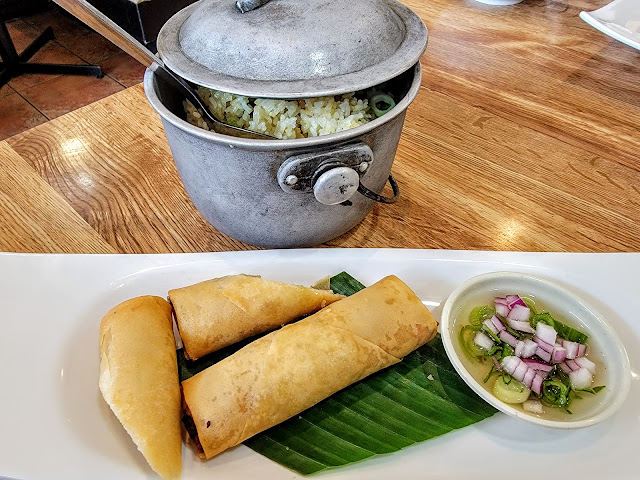 The combo comes with a couple of spring rolls which were very good. Most Filipino dishes come with some sort of vinegar dip. There is vinegar in every form in the Philipines and we have some spicy versions in our own pantry. Don't miss out on using the dips if you are eating Filipino food. We ordered a side of garlic rice as we thought we might run short of food! That was a hilarious notion! 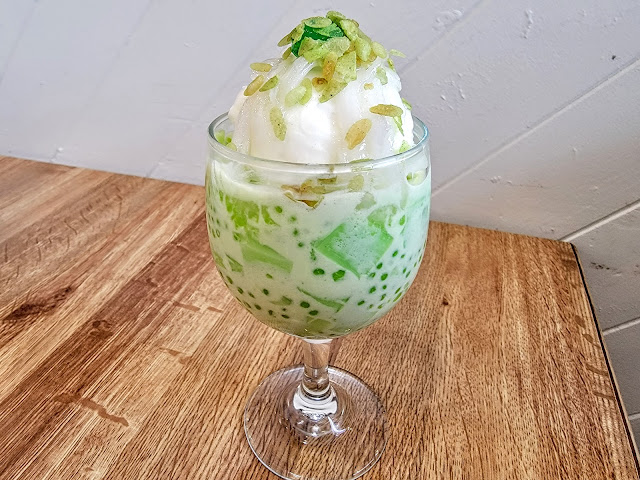 The combo came with Boku Pandan for dessert. It was served with some vanilla ice cream which is a little bit non-traditional but was a nice touch. There were crispy rice bits on top which provided a nice texture bonus. This was quite good. The $25 meal deal also came with a beverage. 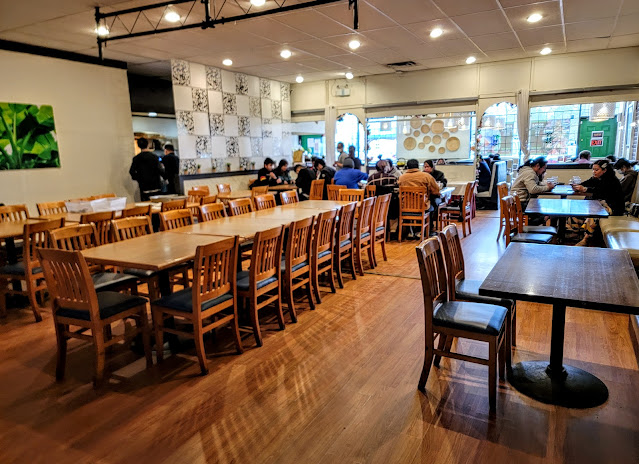 I have gotten in the habit of letting the server know that I intend to order too much! I feel a little embarrassed ordering what is inevitably dinner for 4, for the 2 of us! Admittedly all of this food complete with tax and tips came to $100 but it was more like dinner for 6 as worked on the leftovers for a couple of days!
This is a comfortable enough room, reminiscent of maybe a Mediterranean-style place that occupied the space before? I am just guessing and I don't know for sure. The staff were quite friendly and attentive, especially considering how busy they got as the lunch hour went along. This place is worth checking out!
Food                  4 1/2 out of5
Comfort             3 1/2 out of 5
Service              4 out of 5
Value                 4 out of 5
By Yes! We're Eating Vegan Again! at April 17, 2022
Email ThisBlogThis!Share to TwitterShare to FacebookShare to Pinterest