One of my big concerns when I decided to continue my plant-based diet adventure indefinitely (if not permanently just yet) was about running out of places to blog about! It turns out though that even just since the beginning of this year, 3 new vegan/vegetarian restaurants have popped up! My list seems to be getting longer rather than shorter! The first one to open up that we were aware of was Imposter Cafe and  Provisions on East Hastings near Nanaimo. They are so new that they have not sorted their front signage so you will need the address! 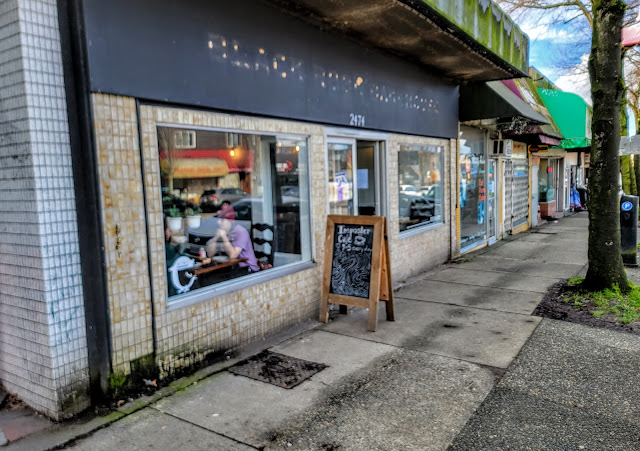 A little power washing and a few letters and they will be good to go! We walked in on a Sunday morning, walked up to the counter and placed our order. They have a nice selection of coffee drinks and baked items if you just want to stop for a treat. 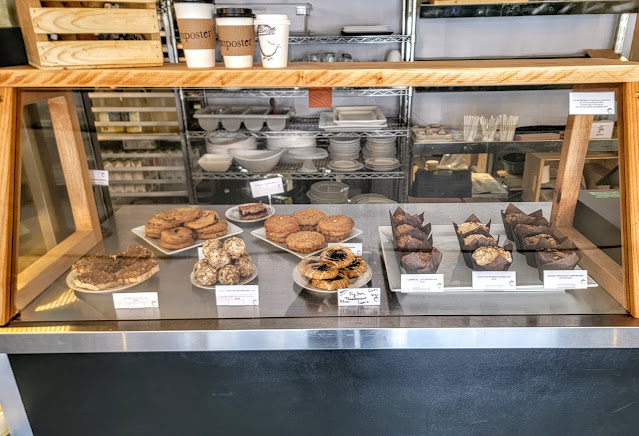 We ordered off the regular menu starting with an Open Face Half Bagel Sandwich with Avacado, Tomato, Garlic Confit and Hemp Hearts. 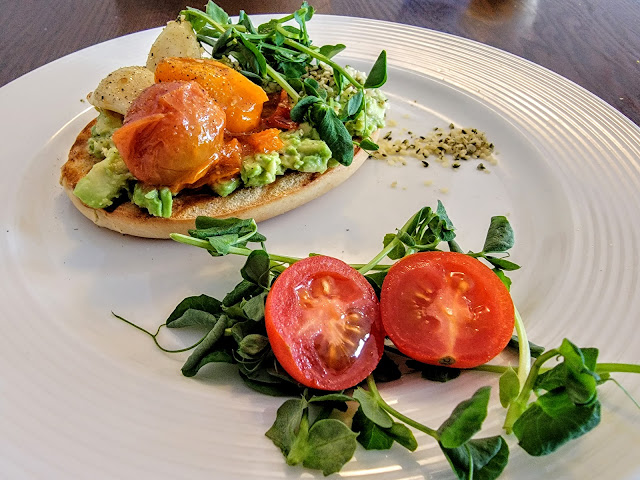 Rather than parsley, IC must have gotten a line on good pea shoots because they were everywhere. That's OK because they were very crunchy and fresh. The tomatoes were very juicy and tasty, the avocado was rich without being overwhelming and we got a couple of good chunks of just tender and mild garlic. Even by itself, this would be a nice way to start your morning. 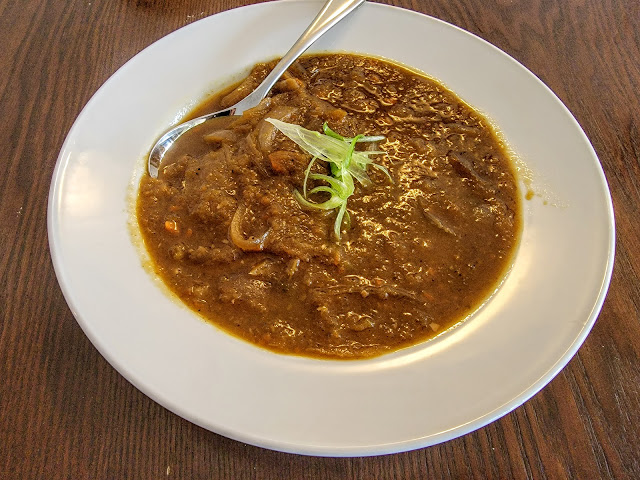 IC had a couple of daily soups including French Onion. I imagined the bread and melty cheese but this did not come with that particular topping. What we got was deeply and slowly caramelized onions, the result of great patience, that were sweet and rich and made into a delicious soup. We would order that again, in a second! 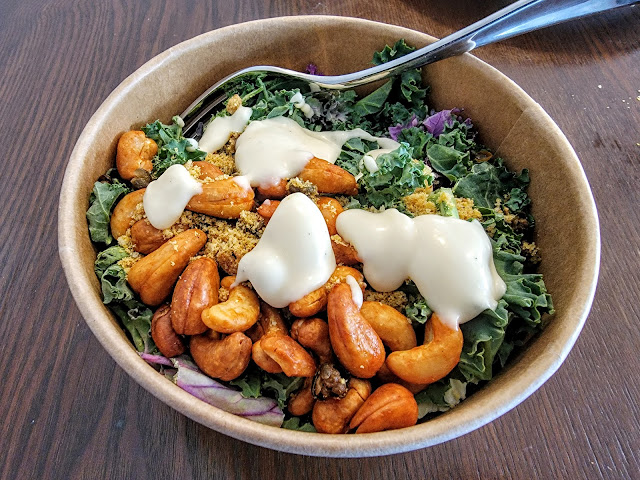 We had a Buffalo Kale Salad and I learned something! My wife really enjoys raw kale which I would not have guessed. So I guess we'll be eating more of that at home. The Buffalo part of the salad was cashews which featured the hot sauce (not particularly spicy) and a pretty decent ranch-style dressing. The menu describes fried capers but I was not aware of any of that (i could have missed it). 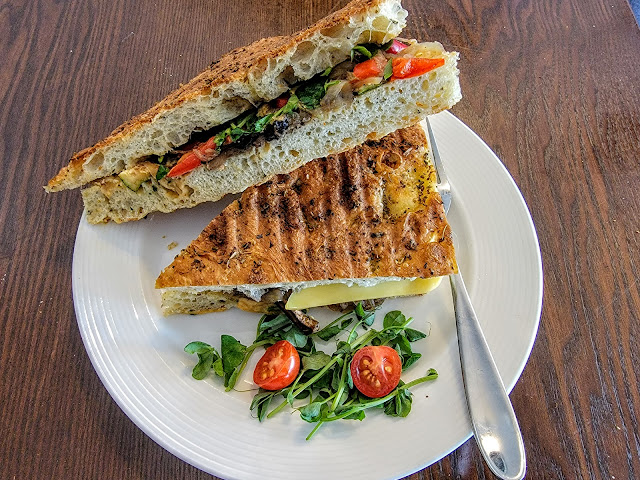 I like paninis. I haven't had them all that often and I'm not sure why that is but at IC they make their own focaccia and that seemed like a good enough reason to try one. Also, their Roasted Vegetable and Smoked Gouda Panini featured a vegan cheese that I had not tried. They assured me that they were aiming for the whole melty cheese thing but although the cheese was very good, the melty thing did not really happen. It was still a really good sandwich and the bread was excellent! 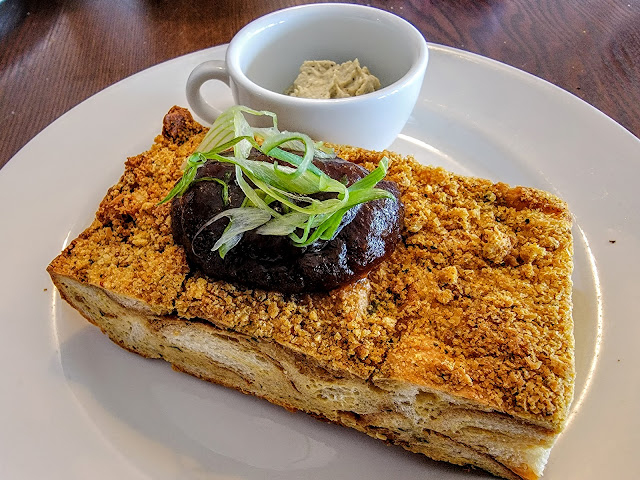 Finally, we tried their Croissant Bread Pudding. This was a savoury bread pudding with Beyond Sausage although we were not really aware of its presence. That doesn't mean it wasn't there but a couple of nice chunks might have added to the experience. This was actually a bit dense pudding and I'm not sure how you avoid that. The presence of beyond egg which is a pretty good product was not the solution. The red onion jam on top was pretty spectacular however and made it all work. They also gave us a little taste of their house-made cream cheese which was also very good. To be honest, we would not order this one item again. 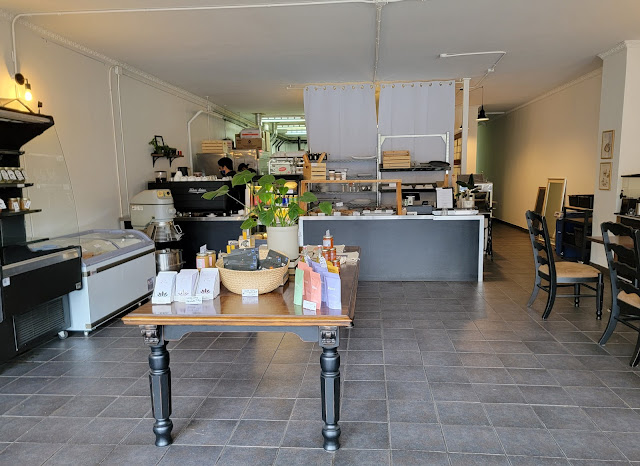 Prices are pretty reasonable here and portions are generous enough that we ended up taking quite a lot home. These folks are friendly and accomodating and the service was quite good. There are quite a few tables around the perimeter (can't see them in my picture but they are there) and they are a little rustic but nicely comfortable. They also have quite a few vegan products for sale including Say Hello Ice Cream that we recently experienced for the first time. That would be the "provisions" part of Imposter Cafe & Provisions! It's great to have another middle of road vegan cafe that is reasonably priced and where you can get a nice lunch or baked treat without being concerned about animal welfare.
Food                      3 out of 5
Comfort                 3 out of 5
Service                  3 1/2 out of 5
Value                     4 out of 5
By Yes! We're Eating Vegan Again! at February 21, 2022
Email ThisBlogThis!Share to TwitterShare to FacebookShare to Pinterest