It's about time. I have had try Aleph on my vegan list forever. This is a Palestinian plant based restaurant, another version (you may have read about Ofra's Israeli style vegan food here) of the vegan eats available to us from the middle-east! 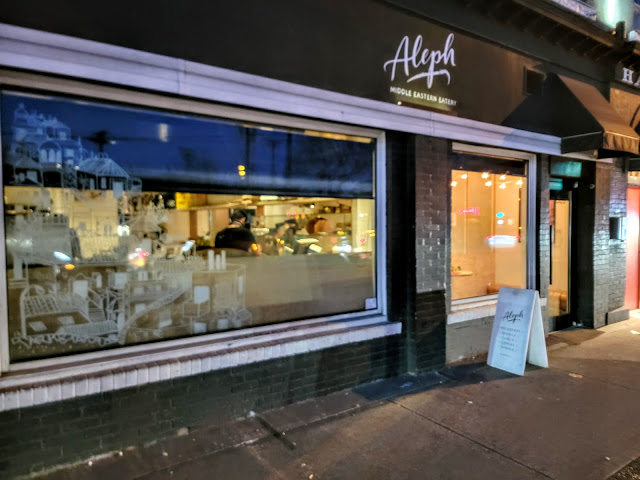 I made a reservation online and that's when I found out about the option of the Jerusalem Experience, a chef's choice selection of four cold mezze, three hot mezze and dessert for $40 per person. It sounded a little expensive to me initially (I would change my mind about that later) but I kind of liked the idea. So we arrived at the restaurant near Powell and Victoria and were seated by our very pleasant server on Saturday evening. Parking on the street was easy and, oh my God, free! 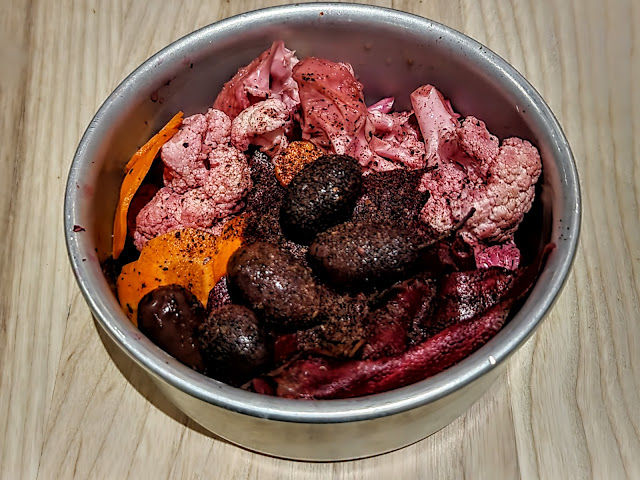 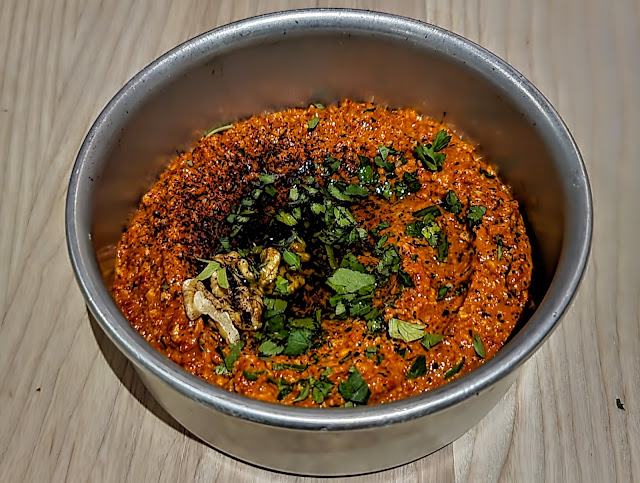 The Muhammara is a red pepper and walnut dip. It had some texture and was very rich. It was served with saj bread for dipping. Very nice! 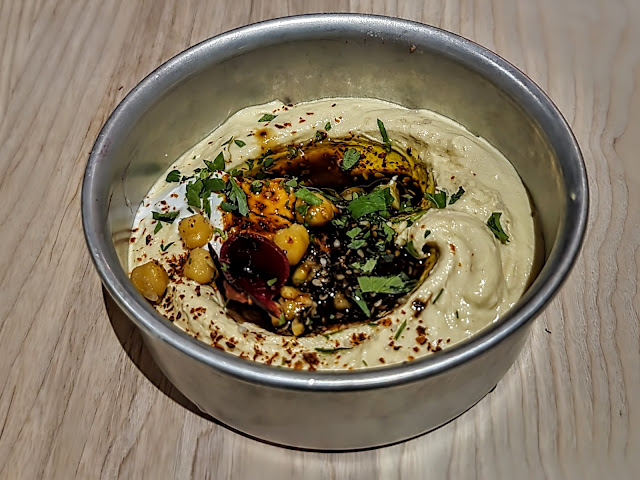 Not surprisingly, hummus was next. Also not surprisingly, this was some great hummus. Rich and tasty with the taste of sesame. We also really like the little metal dishes that most courses came in. I wouldn't mind having some for home. 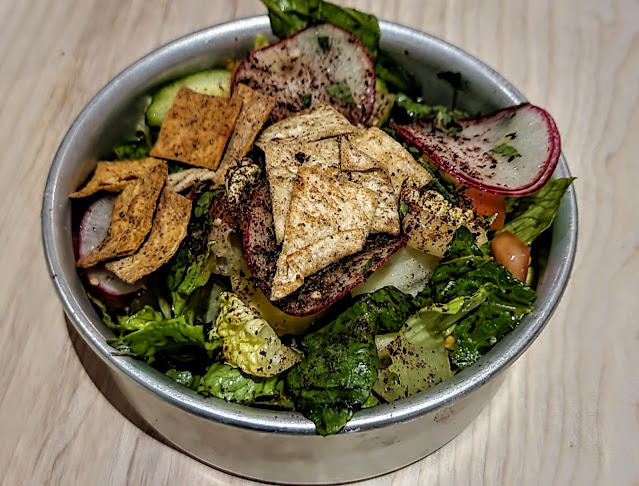 The last of the 4 was a nice little Fattoush Salad. With a pomegranate vinaigrette, lots of herbs and crackers maybe from saj bread (?). Very refreshing. 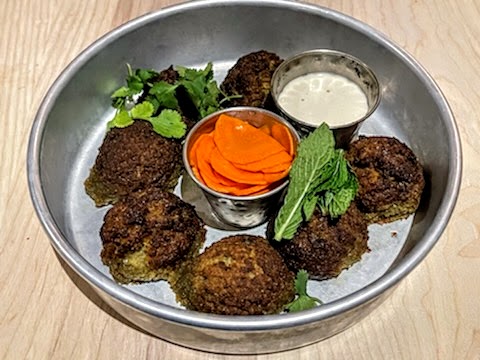 The mainstay of middle eastern vegan cuisine is falafel. It was served with tahini and pickled carrots and was some of the best that we have had. Just a little crunchy on the outside but strong with the flavours of cumin and corriander. 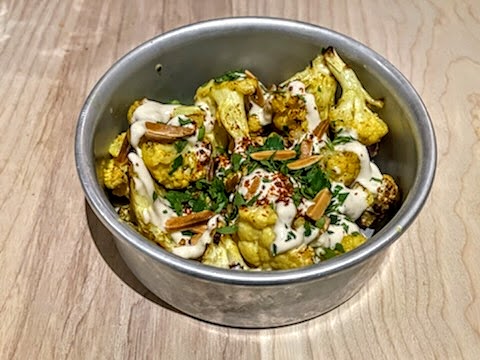 Tumeric Cauliflower was one of our favourites. With almonds and tahini, and again lots of herbs, this was another dish proving that tasty, healthy and plant-based can all be mentioned in the same sentence. 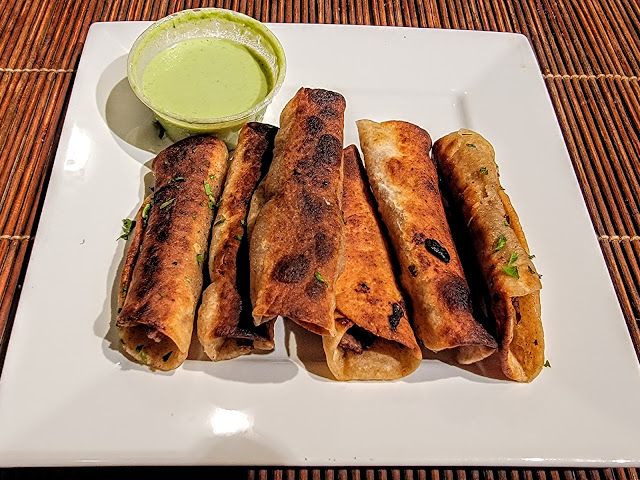 We didn't even manage to get through all the courses in the restaurant and opted to pack a couple to go. We have never had Mosakhan Rolls. Saj bread wrapped around soy curls, pine nuts and sumac, this was our favourite new treat. When a restaurant can serve me something that I have never had before, I am always impressed! 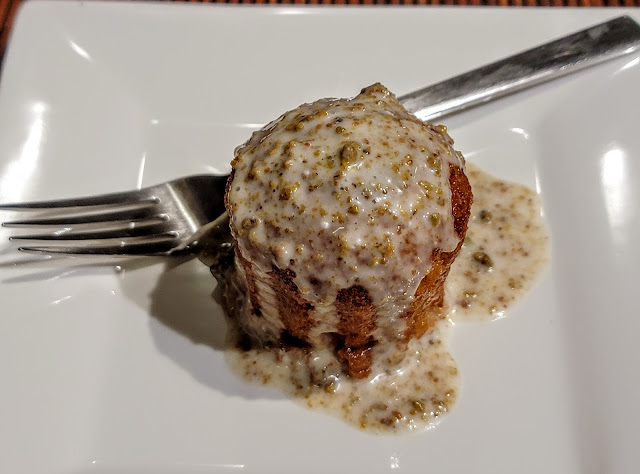 And dessert was Olive Oil Lemon Cake. To be honest, I have never had olive oil cake before either (we have had cake, however). This was moist (no surprise) and lemony with pistachios and coconut whip. A perfect ending.
We had leftovers for at least a couple of days convincing me that this was a very good deal at $40 per head. 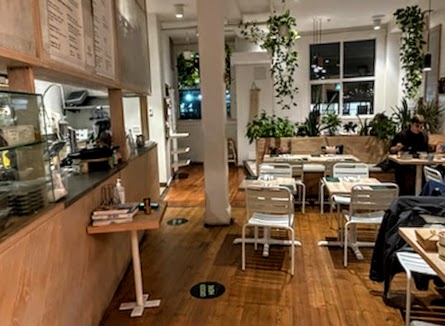