For some reason, this month seems to be a month of multiple food events!  There is La Poutine Week which is a nationwide festival, which I can take or leave (I have expressed my poutine thoughts here often). There is the National Chowder Chowdown  Festival which is also nationwide and which celebrates our sustainable seafood industry. Dine Out Vancouver is also happening from Feb 8 to March 7 and finally, our friend Vanfoodster has launched his Fried Chicken Sandwich Challenge which is easy to be excited about! And we haven't even talked about the first-ever, Feast of Fortune, marking Chinese New Year. The problem is that we would like to participate at least a little bit in all of these but to complete the circuit, we would need to add a couple of meals per day. Another strategy is to combine multiple festivals or events into single stops. That is what we have accomplished in our visit to Freebird Table and Bar (or at least that is what I thought). 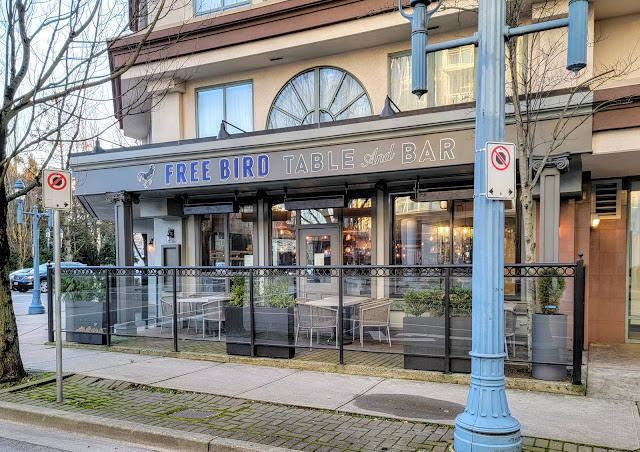 Freebird is located in the Executive Hotel at Westminster Hwy and Alderbridge in Richmond. It made a bit of a splash when it opened and I have wanted to check it out for some time. If you visit, drop into the hotel lobby and they will comp your parking in the hotel pay parking lot. We made a reservation which may or may not have been necessary. Tables are well spaced and social distancing rules are carefully followed. 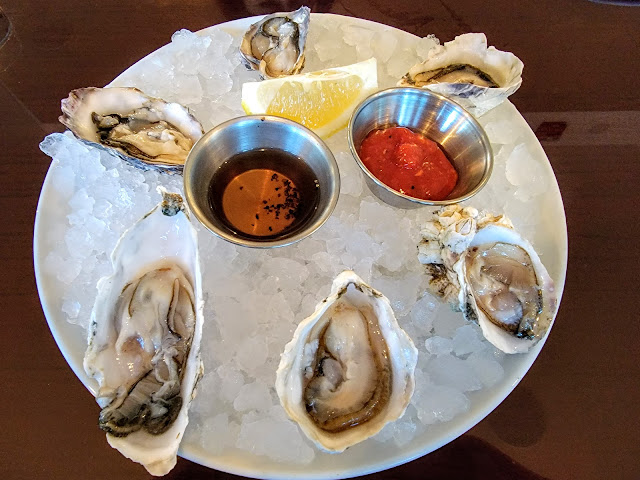 It is worthwhile to visit Freebird during happy hour as they have some pretty tempting deals, including Buck a Shuck. I ordered 6 of these small local oysters (that was a hard pass for Mharie) which were briny cold and sweet. Perfect! 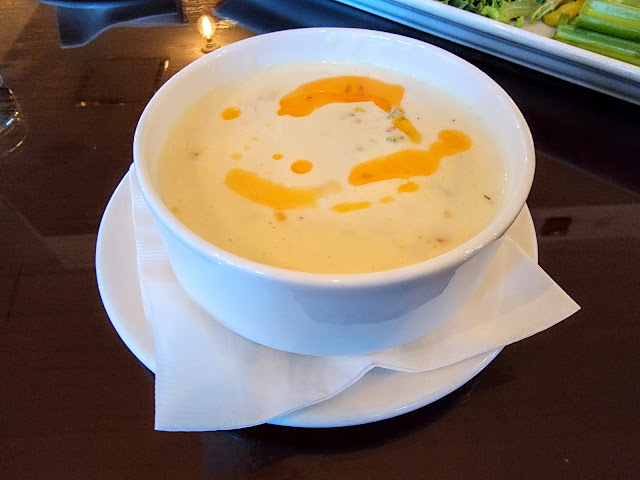 So as mentioned at the outset, we came for the Dine Out Vancouver menu which offered a choice of 1 of 2 appetizers, 1 of 2 mains and dessert for $25.00 per person. This turned out to be a very good value as you will see. We started by trying both of the appetizers one of which was Corn Chowder. This was a rich velvety soup with a little taste of Mexican thrown in. There was lots of corn there too and we decided that we would recommend it if it appeared on the regular menu. Tasty! 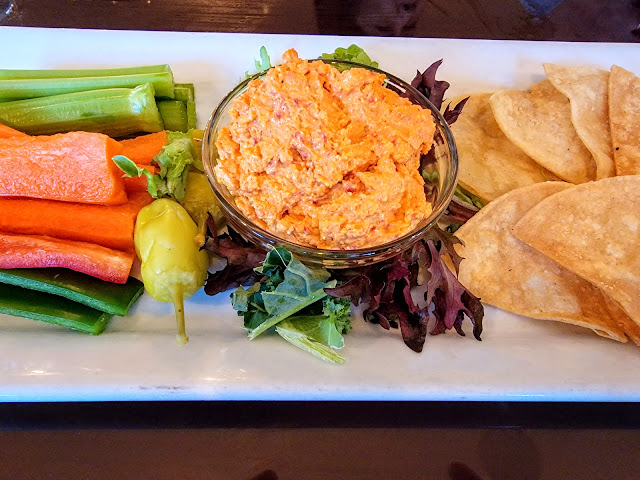 The other appetizer offered was Pimento Cheese and Crudite! I have always wanted to try this and it was just OK. Basically, it is pimento mixed into cream cheese. Having never had it before (never been to the Carolinas) we had no frame of reference but it came with some nice vegetable and tortilla chips for dipping. We enjoyed it. 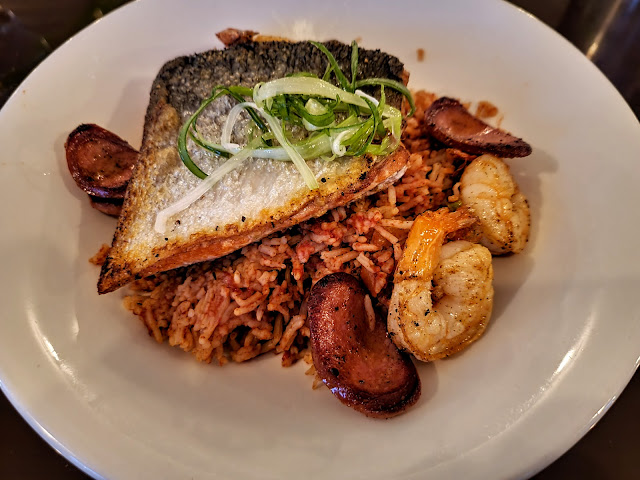 We tried both of the entrees that they were offering. One was Blackened Salmon Jambalaya. This was a tasty enough dish with slightly spicy Creole Rice, Andouille Sauage, some nice plump shrimp and the salmon. The fish was a little on the dry side but quite edible and the rub gave it a nice flavour. The rice was quite rich and enjoyable. 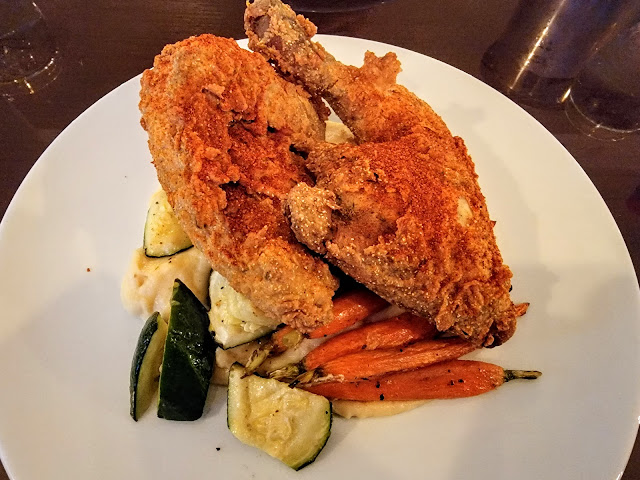 The other entree was Nashville Fried Chicken. I don't think that this is the same as their Nashville Hot Chicken Sandwich (and here is where I thought I was also trying the Vanfoodster Fried Chicken Sandwich) as it had a measure of spice but nothing too serious. It was tasty, don't get me wrong but not spicy. They describe it as buttermilk braised but I think they meant buttermilk brined. The vegetables included the mashed potatoes were great and the dark meat was tender and delicious also but the breast meat got pretty dry. They lost points seriously on that. All in all, it was a very generous portion (a whole half chicken) and getting full, we found ourselves taking our dessert to go! 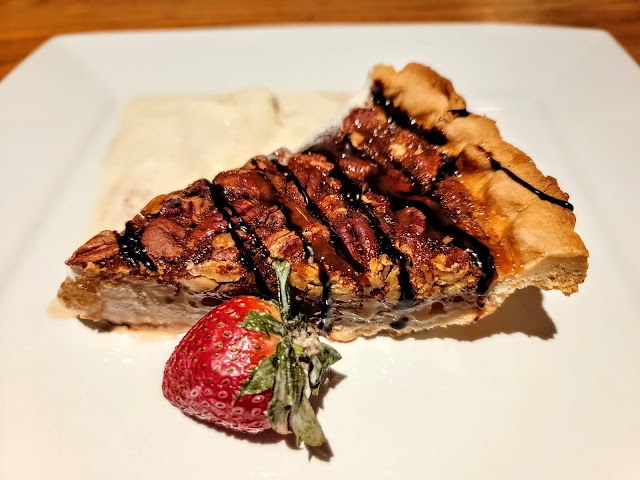 And who doesn't love Pecan Pie! By the time we got home, we were ready for dessert (didn't realize that there was ice cream which didn't travel too well) and it was wonderful! 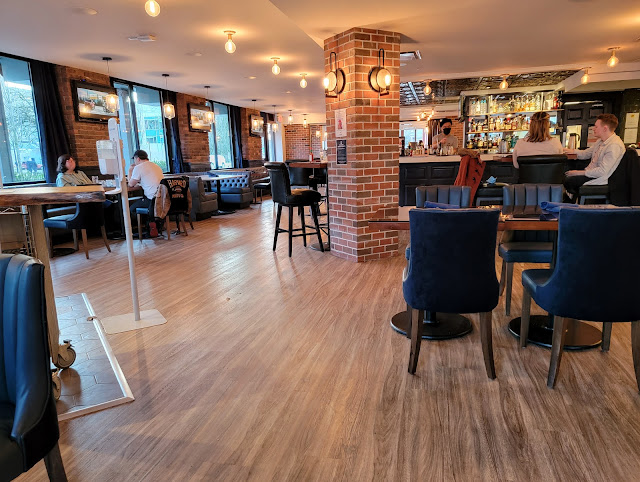 By Yes! We're Eating Vegan Again! at February 09, 2021
Email ThisBlogThis!Share to TwitterShare to FacebookShare to Pinterest