I have recently become aware that veganism is a term that is more all-encompassing than simply following a plant-based diet. Veganism generally means eschewing all animal-produced products such as leather, honey, etc. and I admit that I have not thrown away my leather shoes (I am more likely to seek out alternatives in the future). I have been and in this post will continue to use the word vegan to refer to the more limited meaning of a plant-based diet.

To follow this kind of diet, you don't need to buy organic food. If we all refused to eat food farmed using conventional methods (i.e.non organic), a good portion more of the earth's population would be going hungry right now as organic farming methods produce smaller crop yields in some cases by as much as half. No, we can't just farm more land as most of the earth's decent arable lands are in production already. We could cut down more forests. How do we feel about that? Organic foods are pretty much a first-world privilege. It also does not provide increased nutrition but it is true that some truly rare people may have sensitivities to non-organic foods. Anyway, if you can afford it, be my guest.

To be a vegan, you don't have to refuse to eat GMO crops. If we only ate non-GMO foods, again a good percentage more of the earth's population would be going hungry as GMO crops have increased yields worldwide. Non-GMO food is another first-world privilege. It is usually insisted upon by people who incorrectly associate GMOs with Monsanto or who are science deniers believing that GMOs present untold dangers. The fact is that GMO crops are more carefully regulated and tested than the stuff we have been cross-breeding over the millennia using the hit and miss method (and surviving for the most part).

I have oversimplified above and I am not a scientist but I listen to both sides of the story and try not to be sucked in by advertising and pay-for-publish magazine articles that present whatever will sell their product as the truth. Do some open-minded research for yourself and follow the money.

Anyway, you don't need that stuff or any of the expensive products available at your vegan supply store. Being a vegan can actually be quite satisfying and nutritionally complete and above all simple and inexpensive. In broad terms, eat fruits and vegetables, whole grains, legumes, nuts and seeds and you will be fine. There are a couple of micronutrients that are not readily available in a vegan diet that would need to be aware of if you were pursuing this as a long term lifestyle but not for the month-long things that I have been doing.

Do this stuff and you will be doing yourself and the whole planet a favour. A plant based diet leads to a smaller carbon footprint. It is healthier. It is cheaper. And you don't have to kill any animals. In there somewhere, you will probably find some kind of worthy motivation. You, Metro Vancouver food bloggers, might think about whether you could be promoting something of great importance by emphasizing vegetarian and vegan-friendly joints.

In November of 2020 (World Vegan Month), Mharie and I visited 9 restaurants in Metro Vancouver and the Fraser Valley that have vegan menus or options. In January of 2021 (Veganuary) we visited another 10 restaurants and cafes (and a truck), offering the same. You can read about them on this blog obviously. We tried some interesting vegan products that were not available the last time I did this (actually 2 years ago) and tried some interesting recipes.

Right off the top, I was happy to find vegan mayo and margarine in comparably priced standard brands (rather than the vegan store expensive versions). 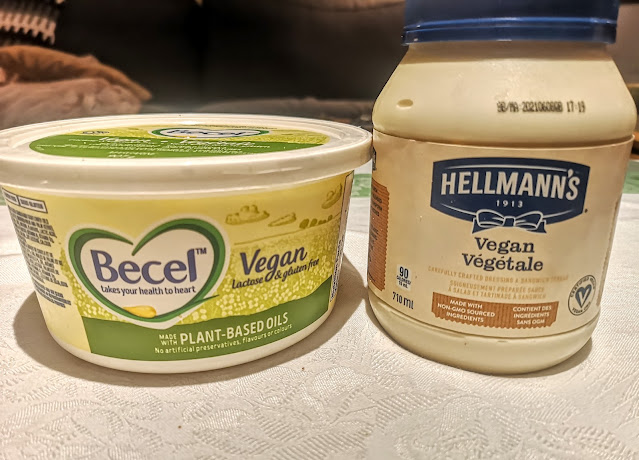 The jump from carnivore to vegetarian is almost less traumatic to me than the jump from vegetarian to vegan. Giving up eggs and cheese is somewhat painful. 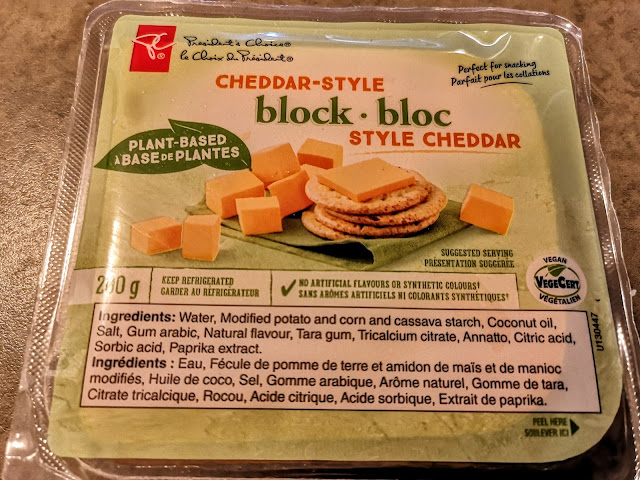 Fortunately, some decent products are now available and are frankly not too bad! The above pictured Presidents Choice product is not ridiculously priced and it was close in flavour and texture to American slices (which may horrify you). It was melty and cheesy. 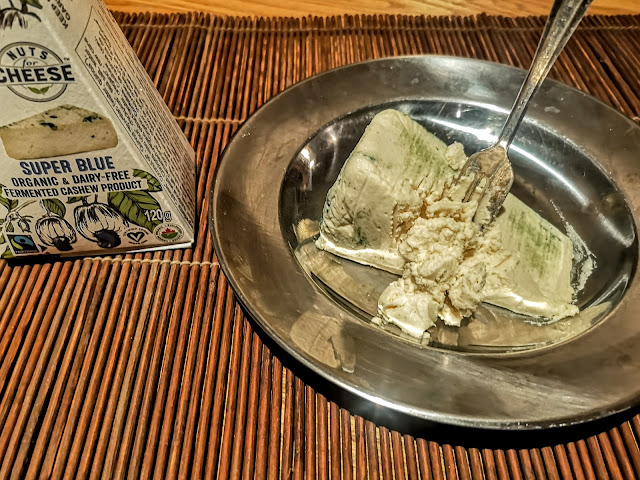 One thing that I did buy from the recently opened, Vegetarian Butcher in Gastown is vegan blue cheese. It was pretty good and the taste of brewers yeast was limited (almost always a vegan cheese ingredient). I did not like it as much as my usual dairy blue cheese but for the sake of the planet, I am willing to spend the extra coin for a treat! $15 for this small taste of 'blue cheese' was OK.
We tried tempeh a couple of times over the last few months. It is a traditional Indonesian fermented soybean product that was not developed for the vegan culture. I have to admit that I was not enamoured of it until Chau Veggie Express offered it based on peas rather than soybeans. It doesn't mean that you shouldn't try it in its traditional form. You can buy it at regular grocery stores. 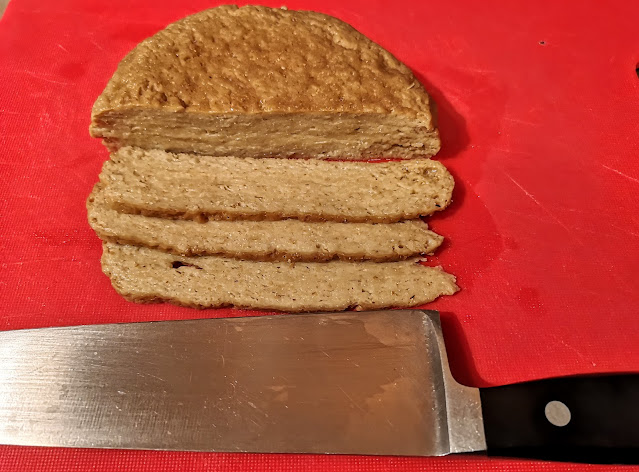 We also tried seitan for the first time. This is probably unnecessarily expensive if you buy it already made, like most convenience products. We were able to buy the vital wheat gluten from which is made, at a local health food store for a surprisingly reasonable price. It is also easy to make! I made it a couple of times and used it a few different ways. 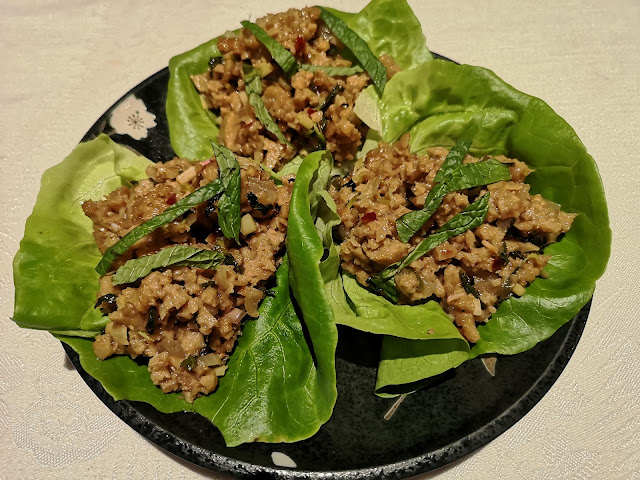 One of the things that we made is this Thai Larb Lettuce Wrap which you may have that I posted on Instagram. BTW, if you are not following us on Instagram, why not? There are dozens of recipes that use seitan which is maybe the best meat mimic that we have come across. 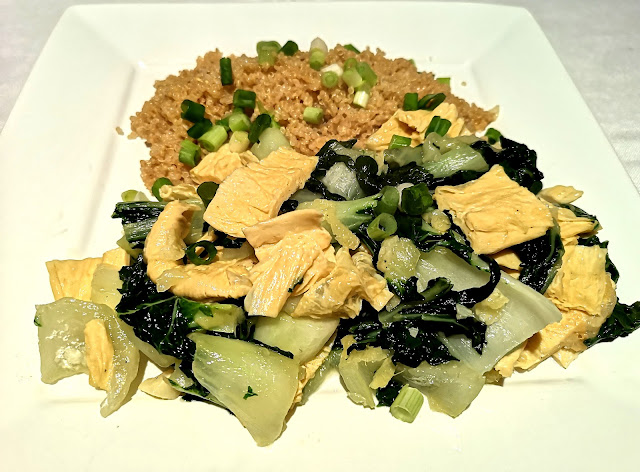 Another interesting product that we tried is tofu skins. Again, this is a product that has been a part of Chinese (and probably other) cuisine long before veganism became a movement. Literally, the same as pudding skin which you may fondly recall from your youth, tofu skin is the top layer! Easy to find, in most Asian markets, it stir-frys or braises well and provides that extra layer of protein that we so desperately believe that we need (but really don't). 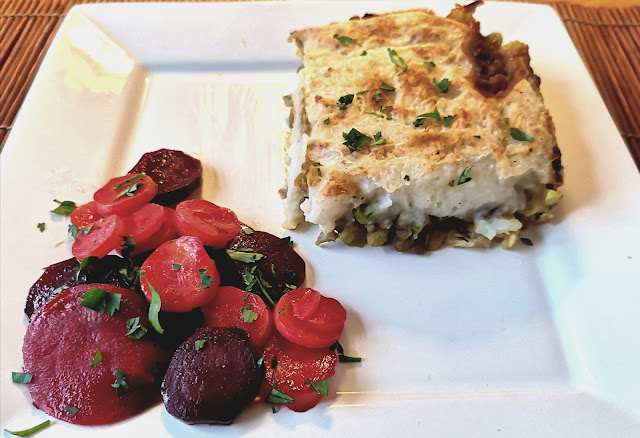 Still, there is no need to get complicated. If you don't really enjoy getting crazy, a simple Lentil Shepherds Pie with some nice sauteed vegetables is the perfect vegan meal!
If you are like me and not ready to commit, then give thought to making an effort beyond just Meatless Monday. Why not try making meat and cheese and eggs, the rarer ingredients and gradually move away as far as you dare? That is what we are doing and we feel better for it! 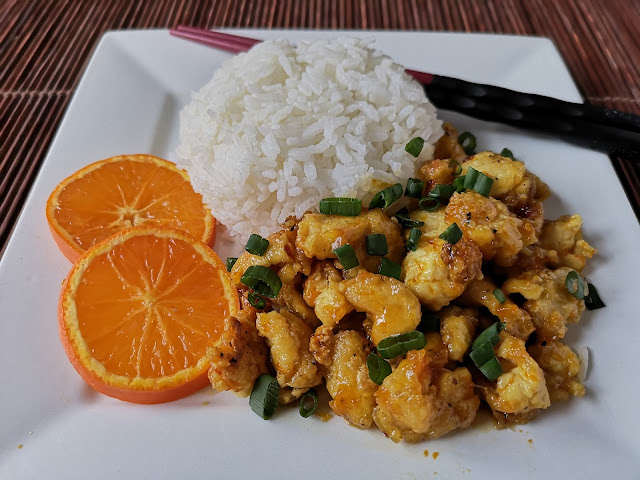 Hopefully, you can be tempted by Orange Tofu! For ideas scan through our Instagram feed (I always try to give the recipe websites as a reference) or this blog.
Cheers.
By Yes! We're Eating Vegan Again! at January 31, 2021
Email ThisBlogThis!Share to TwitterShare to FacebookShare to Pinterest