Does the "7th most popular city in the world for vegans" include the burbs? You can tell that I am excited that Vancouver has received that recognition by 'Chef's Pencil' as this is the third straight post in which I have referenced the award. And vegan and plant-based joints are popping up all over the place in the whole of Metro-Vancouver. Down 2 Earth is one example of that found in Walnut Grove just off 88th Avenue on 202nd. 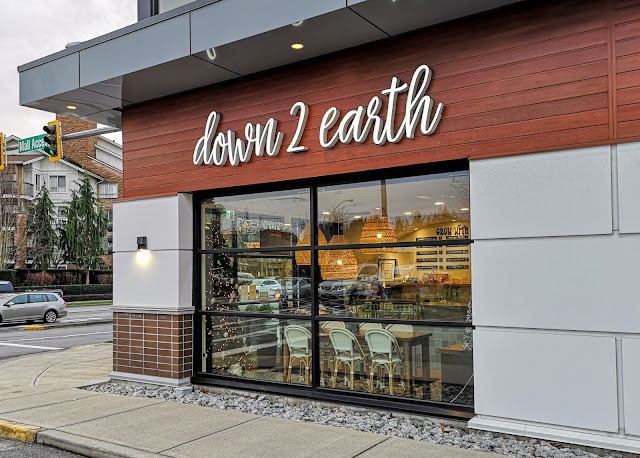 I arrived in the afternoon just around 4 so I could hopefully order from their lunch menu but also off of Nonna's Italian dinner menu. To my chagrin, the arancini was not available (it happens) so on that first visit, I tried their Grilled Cheese from the lunch menu. 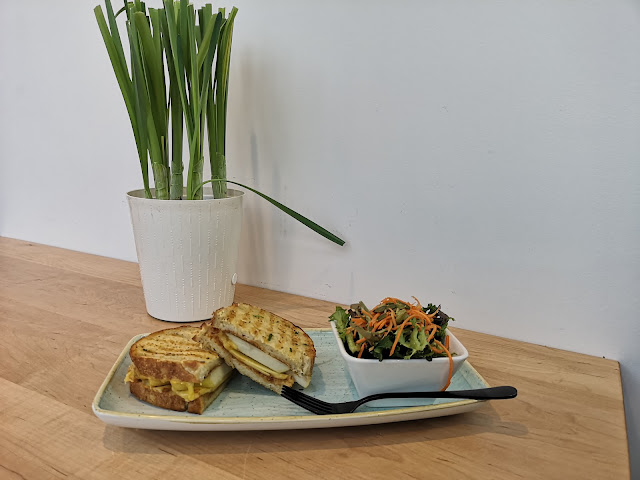 This was an excellent toasted sandwich with smoked provolone, bacun jam and pear slices. On the side was a nice assembly of seasonal greens that was supposed to come with apple miso vinaigrette (I didn't get mine but I did go back and ask for dressing). I enjoyed this crunchy and rich sandwich but I am not sure that I would pay $19.50 for it again. I expect that sometimes vegan items are expensive because for example, the cheese is made in small quantities and probably by hand but still, $20 seems a little steep even compared to our recent vegan adventures. 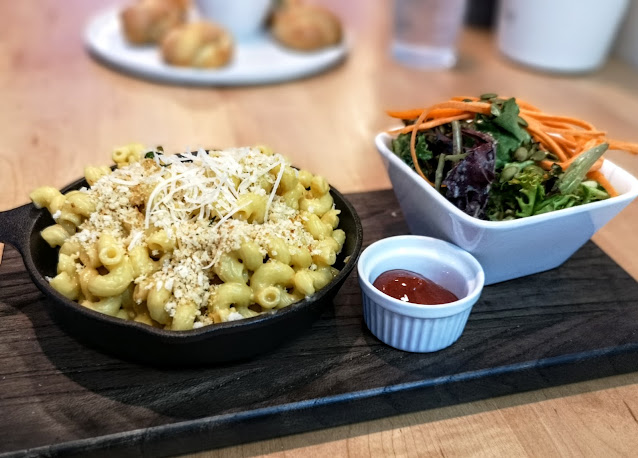 On a second visit, a week later (this time I knew the arancini was only going to be available on Friday), I was again anxious to try something from Nonna's menu but the Lasagna D'Constructo was not available. They are keeping the Nonna's menu items limited at the moment and that is understandable and admittedly, restaurants must do what they can to survive. That being said, communication is key and that is what websites are for. Anyway, I had the Mac Daddy from the lunch menu instead. This was impressive for vegan fare, creamy and cheesy without any hint of brewers yeast, that ingredient that seems to be fairly omnipresent in vegan cheese. With a nice side salad again (this time dressed) and an impressive side dish of house-made ketchup. I could not quite nail down the earthy mild spice in the ketchup but it may have included turmeric or cumin? I rarely go on a ketchup tangent but this was tasty! At $19 for this, I again feel like the pricing is on the high side. Maybe the inclusion of a salad which was clearly not just an afterthought, makes it right. 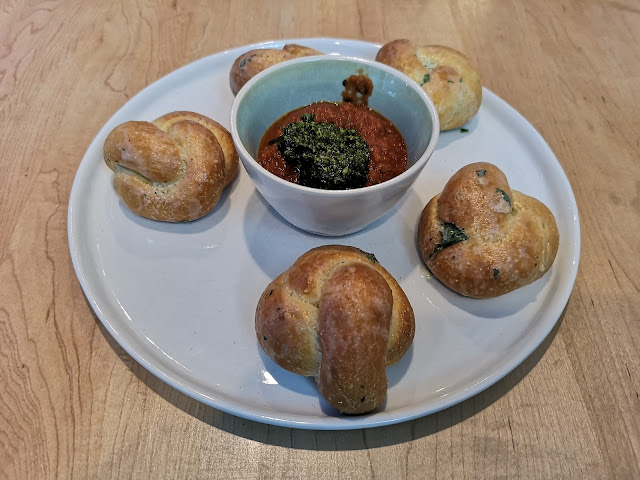 I did order one item from Nonna's menu. The Garlic Knots were salty, cheesy, warm and very enjoyable. Nicely done on the bread which came with marinara and a sort of pesto, it was very comforting. 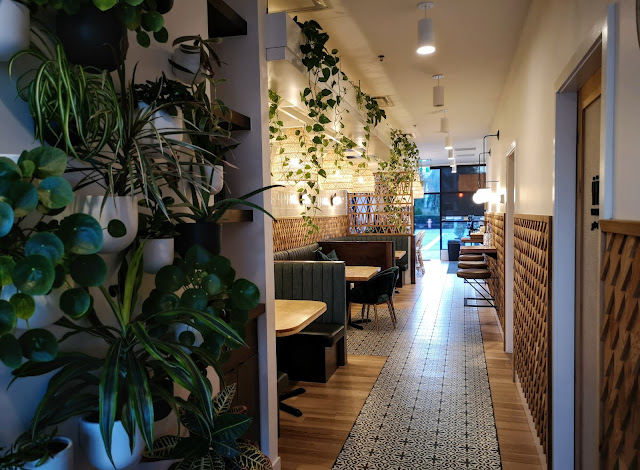 D2E is a wonderfully designed comfortable space. Attention to detail, even in the washrooms is warm and inviting. Someone can be proud of their effort. The food here is not unimpressive but it would be nice to have some smaller plates available as the garlic knots and only occasionally available arancini leave room for something else. What about soup? There are really nice people running this place and they have a nice gracious vibe that is reflected among other places in the plant-based menu. Still a little on the pricey side but I suggest that you should give it a try.
Food         4 out of 5
Service     3 out of 5   (servers are great; unavailability of Italian menu items less great)
Comfort    4 out of 5
Value        3 out of 5

By Yes! We're Eating Vegan Again! at January 15, 2021
Email ThisBlogThis!Share to TwitterShare to FacebookShare to Pinterest