How To Gain 10 Lbs in Houston, Texas! Starting at Ninfa's on Navigation

I apologize if you have already seen this blog post. I'm having some issues.
So my brother (Calgary energy company accounting manager type guy) says to me," I have to go to Houston for a week for meetings. Why don't you meet me there and we can eat barbecue?"
"But", I reply, "I'm into this thing where I'm trying to set a good example for foodies by sparing my four-legged friends and the planet as a whole by eating vegetarian more faithfully... Oh, screw it! The planet will survive for another week without me....but after that!"
Now, I appreciate that I have just displayed the typical boomer selfish attitude and if you serious vegetarians and vegans want to block me I will understand. I will, however, promise to secretly and undercover, try to flesh out the vegetarian scene in Houston, Texas, a city and state to which I have never been and to which I do not attribute a large meat alternative culture. Beyond that, if I am not eating barbecue, Tex-Mex or soul food during the next week, I am not eating. My travel day, Sunday, Feb 2, 2020, was rough because I am too cheap to travel by any but the inexpensive multi-leg routes (thank you Hotwire!).
So finally at 6:35 (Houston time), I was on the ground and had my very first Uber experience which was excellent. I gave my driver and new pal, Ali, 5 out of 5 for his efficient delivery to my downtown hotel.
No sooner had I arrived than we were off to find food! 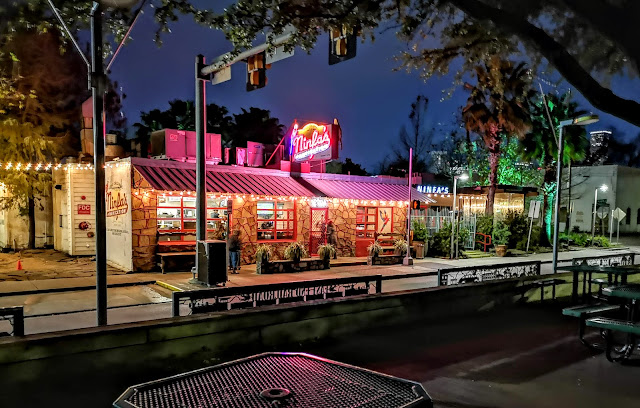 My brother's unbridled enthusiasm for Ninfa's on Navigation meant that it was going to be our first stop. Ninfa's is a Houston institution that started in 1973 at this location. It has a complicated history such that I could not even tell you how many locations there are now and who owns them but hey...we're here for the food. 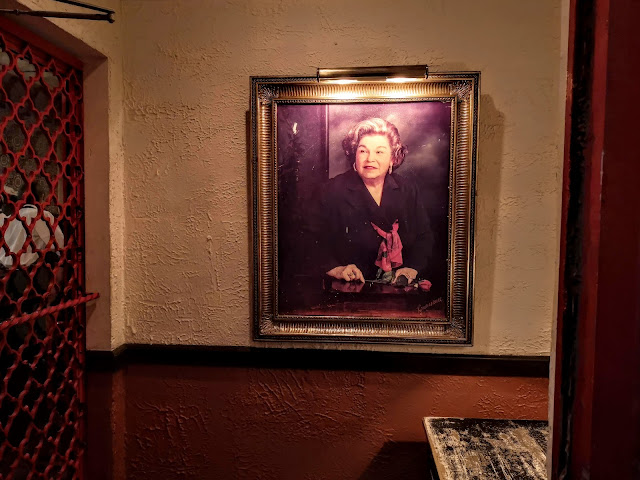 What I can tell you is that the matriarch, Ninfa Rodriguez Laurenzo, a Mexican American widow with 5 children, opened a 40 seat taco shop here to prop up her tortilla factory. The rest is the stuff of legend. 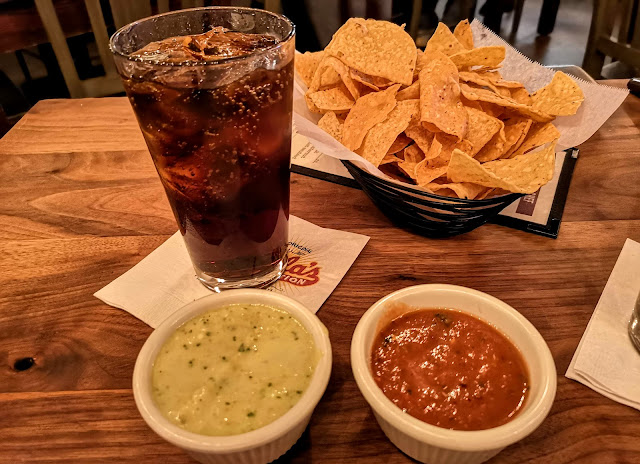 On the downside is that if we eat like this all week in Houston, I may explode. They brought us chips and salsa the moment we sat down. These were not chips from a bag but were fresh from the fryer. That fact may not amaze you folks from Texas but my two or three readers from home in Vancouver, Canada will be sitting with their mouths open at this point (oh, not really. We do have some decent Mexican food there). The more notable of the two salsas was a melange of avocado, tomatillo, cilantro and chilis (green stuff) which was amazingly light and refreshing. 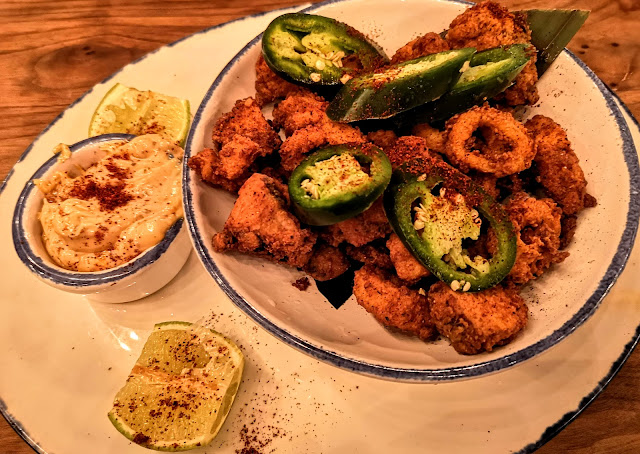 At our server's suggestion, we started with the Mixto Frito of squid, shrimp, and octopus, fried and served with chili aioli. Light batter and amazing seafood were perfectly cooked (even the octopus) and paired well with the creamy mayo. Delicious. 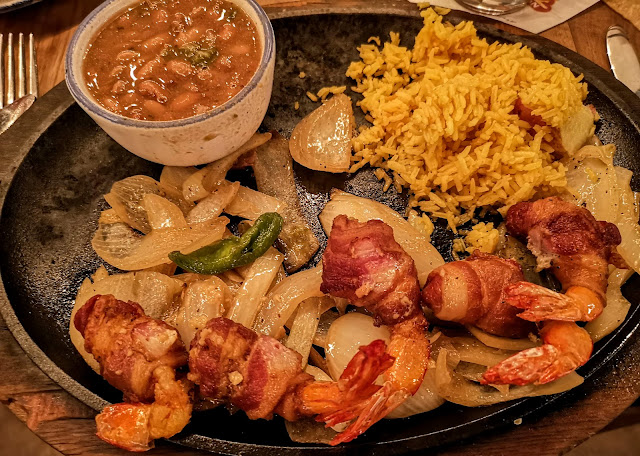 Dave had Ninfa's Famous Shrimp Diablo. The shrimp were stuffed with cheese and jalapeno and wrapped in applewood smoked bacon. If there is anything that comes from the Gulf of Mexico that should not be missed when it (the gulf) is nearby, it is the shrimp and these were plump and tasty, perfectly cooked with just a bit of snap to confirm it and set off by the salty crispy bacon. The use of the word famous here is not superfluous! 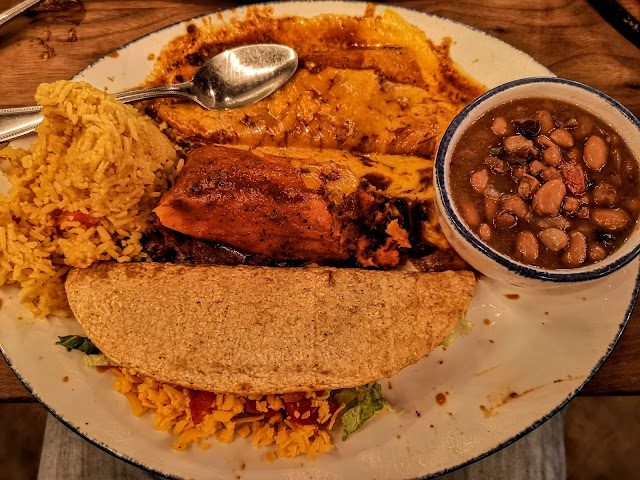 I had a combo because I can never decide. The beef tamale at the centre of the combo may be the best that I have ever had! I realize that whenever I am eating anything, I tend to feel that but this is serious. Tamales to my thinking are more of an art than any other Mexican dish. They can so easily be tough or dry but these were perfect. The dough itself was reddish which may have been the addition of a bit of achiote to the mix. I wouldn't ordinarily order a crispy taco but this brought me some joy also. Often ignored are the rice and beans but the charro beans and rice served her could make a delicious  (and healthy) meal all by themselves. 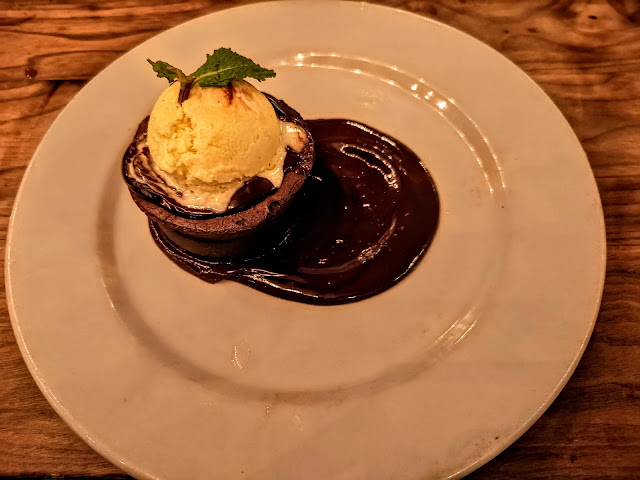 And here is where I begin to fear for my life. Dave insisted that we try dessert (and he was right to do so). The Mexican Chocolate Cake was ridiculous. Sort of a molton cake but warm and melty in the middle that you could curl up and take a nap in it. The difference must be in the Mexican chocolate, sugar and just a hint of cinnamon. If I was stuck on a desert island with only one dessert for the rest of my life...this might be it. 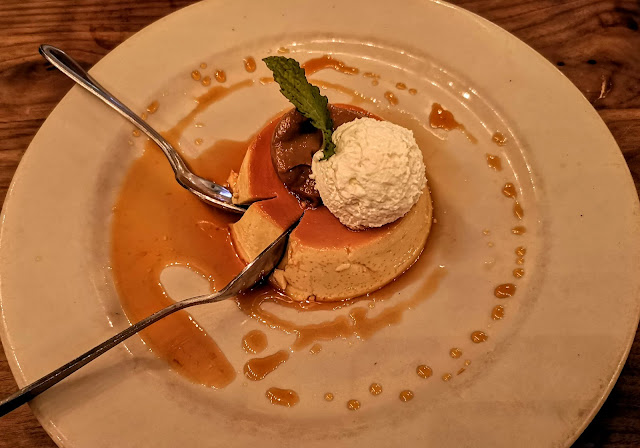 Or maybe it would be this one. A flan to rival all flans (except my partner Marie's of course!), this was a perfectly textured smooth dish and not to be missed.
Don't let me forget the excellent friendly service that we enjoyed!
So that's how I was welcomed to Houston (at least at one time in the past, voted the fattest city in America) and why I intend to double my walking routine for the next few days. As usual, please, no one tell my doctor.
For what its worth, I give Ninfa's on Navigation, 4 1/2 out of 5.
By Yes! We're Eating Vegan Again! at February 09, 2020
Email ThisBlogThis!Share to TwitterShare to FacebookShare to Pinterest