One of my favourite "celebrity" chefs is the Food Network's own Mario Batali. At home, I have one of his cookbooks with a picture of him on the cover in his whites and omnipresent orange clogs. I have learned a lot about Italian cooking from him over the years.
When I found out a few years ago that his father had opened Salumi in Seattle, I made the pilgrimage and was not sorry. The problem was that they were only open Monday to Friday which is a little inconvenient for Vancouver folks. Only this past weekend that Marie and I spent in Seattle, did I realize that they had changed locations and are now open Saturday! 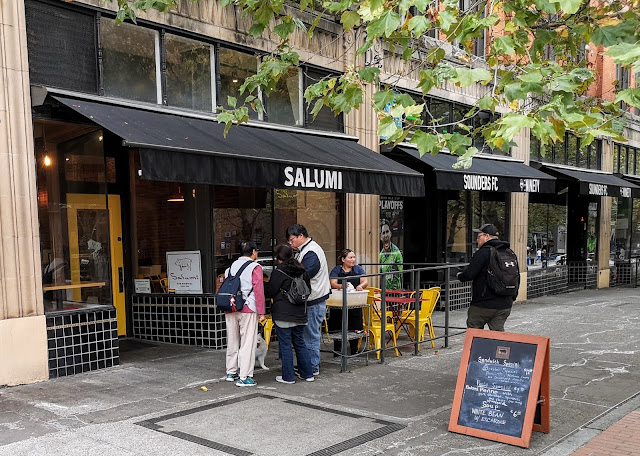 My previous experience involved lining up before 11 with a crowd and waiting for them to open. This past Saturday, by contrast, had us walking in and right up to the counter to order, possibly explained by most folks not being aware of the Saturday opening and Pioneer Square being remarkably quiet at that time. Good for us! Sandwiches are the main attraction here featuring house-made and house-cured meats and salamis. 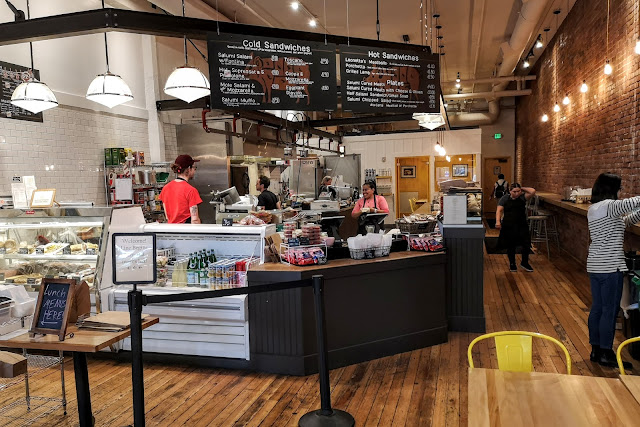 They also do a daily fresh pasta. Marie is not a huge fan of sandwiches so she tried the pasta. They were serving Baked Penne with Bolognese for just under $10 and it was excellent! They were generous with the cheese and the pasta was just al dente. Very nice! 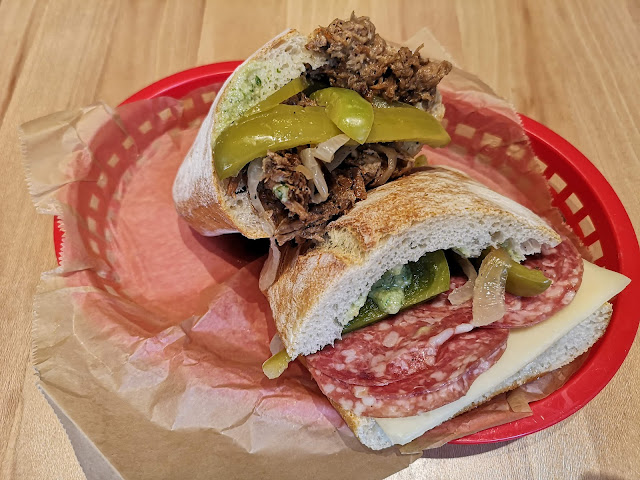 If you are having trouble deciding on a sandwich as I was, they will do half and half. I chose half Porchetta and half Salami with Fontina. The salami was excellent in a way that only house-made product can be. A nice ratio of fat to meat and there was enough that when added to cheese, marinated peppers and salsa verde a heavenly sandwich was the result. The porchetta was of the pulled variety when I was expecting a little more like Vancouver's Meat and Bread version which is sliced with cracklings. I have to give the decision on this one to M and B but I was not complaining about this tasty sandwich either. Cudos to Salumi for the salami and house-made marinated peppers. These were worth the price of admission! 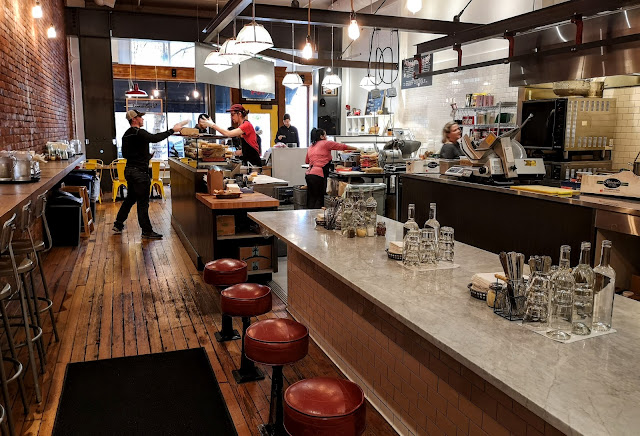 This is a beautiful little cafe and the staff were friendly and happy to discuss their craft. Salumi should be on everyone's list and I am a little envious of those who can go for lunch here regularly.
For what it's worth, we give Salumi 4 1/2 out of 5.

By Yes! We're Eating Again! at October 18, 2019
Email ThisBlogThis!Share to TwitterShare to FacebookShare to Pinterest