Less common than the popular pub crawl, a food cart crawl can definitely be a thing, especially in Portland, the food cart capital of the West! 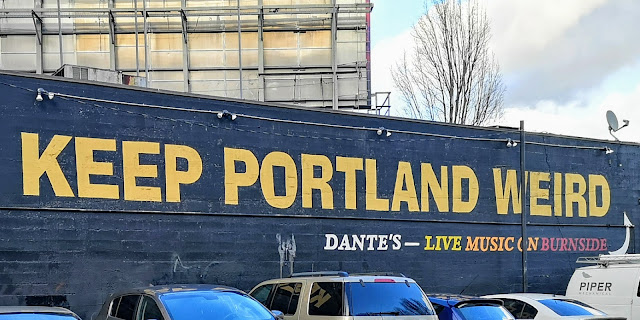 So we spent the morning at the Portland zoo, which seemed to be about 50% an active construction site. We did enjoy the rest of the zoo and saw some very cute Hyena pups but they were just too wriggly and a little too far away to get decent pictures. Sorry! 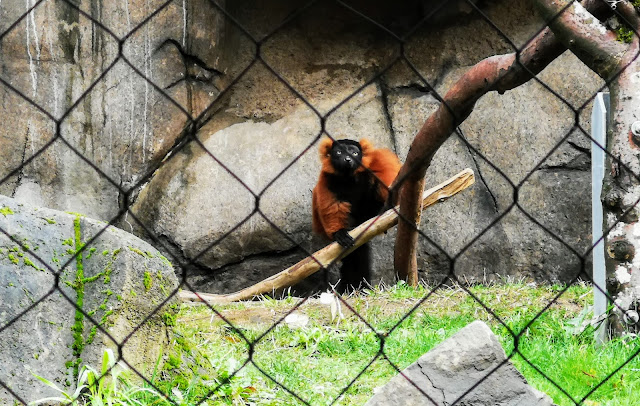 This lemur was cute too as were the mountain goats and..well you've been to a zoo before. 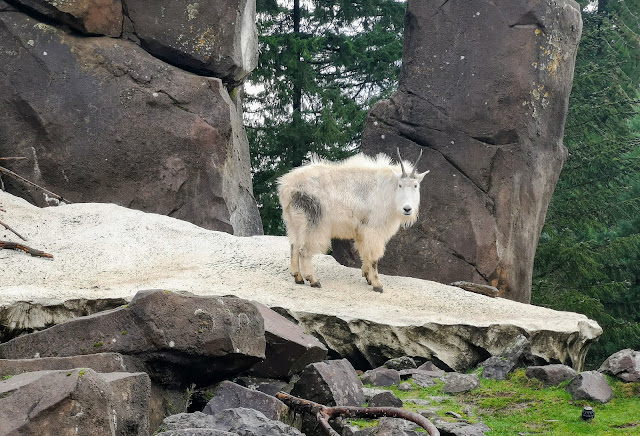 So we caught Max Light Rail to the downtown area and began our search for something interesting to eat. My usual rule of not eating Asian food when not in Metro Vancouver (or in Asia obviously), was vigorously ignored. For one thing, Marie wanted noodles! 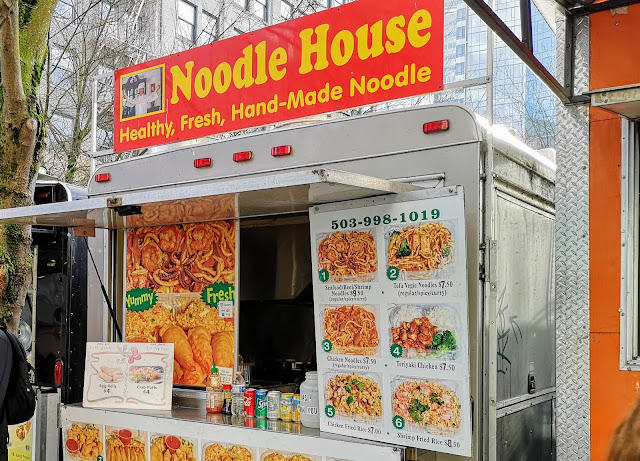 The Seafood Noodles consisted of 3 or 4 shrimp and some squid in addition to some decent chewy noodles and vegetables. 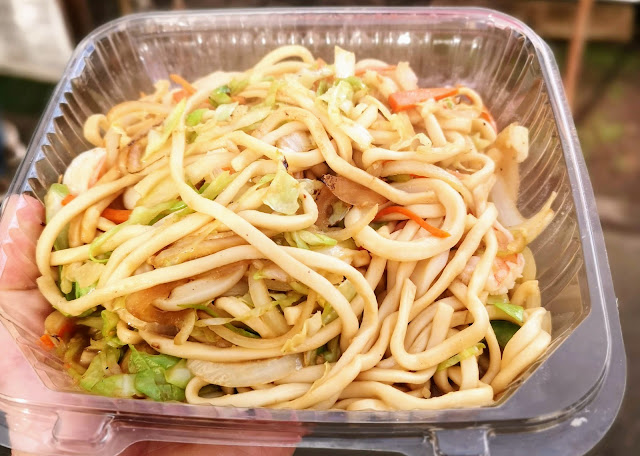 Something is happening such that probably 60% of all the carts are now gyro / falafel / pita / middle eastern leaning, which is fine but I was looking for something different. I thought I had found it in the form of Eggy Pocket. 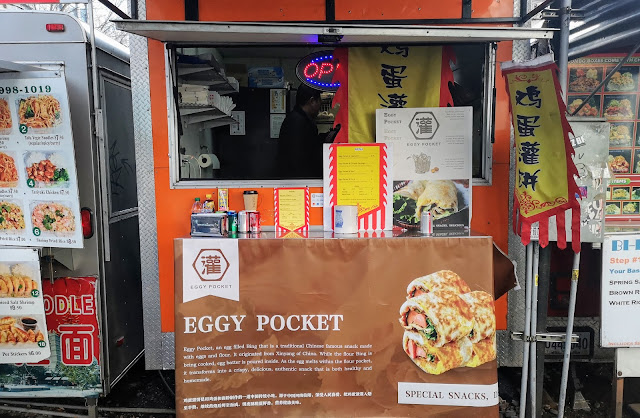 But it turned out to be a lot like something I had at the Richmond Night Market this summer. 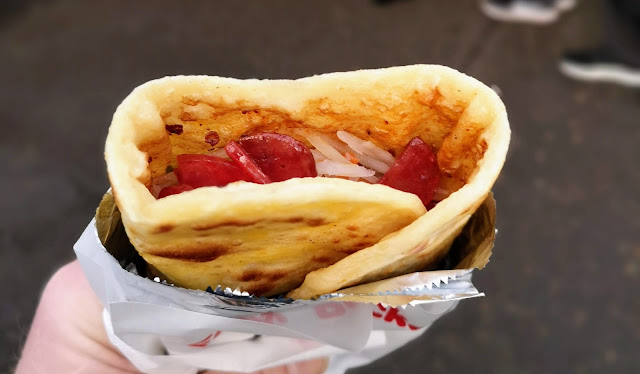 Sort of a pita but 'eggier' and in this case filled with Chinese Sausage, sprouts, etc. I enjoyed it. It had a bit of spice to it. Further along, I found the Cubano that I had been thinking about at Sandwich Cartel.. 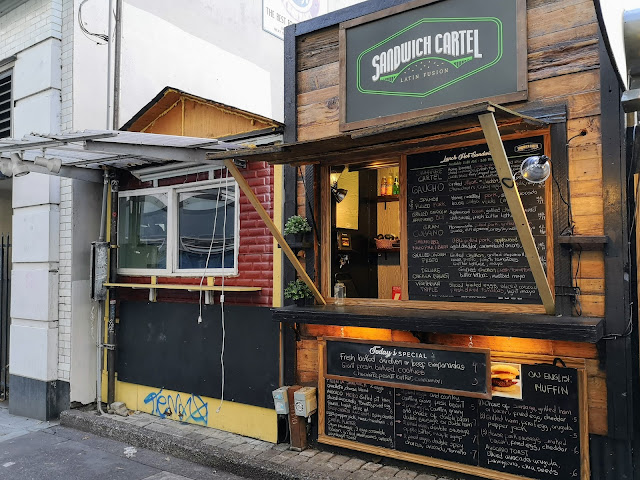 It didn't turn out to be the panini pressed version that I was hoping for but it was tasty with pork, ham, cheese, mustard and pickle. 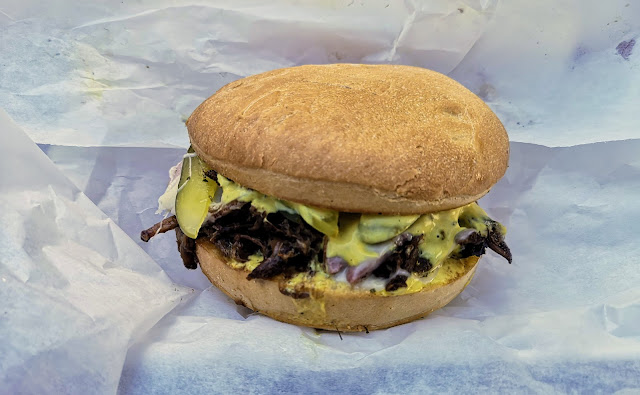 So nothing earth shattering from the food carts but there was still Voodoo Donuts! 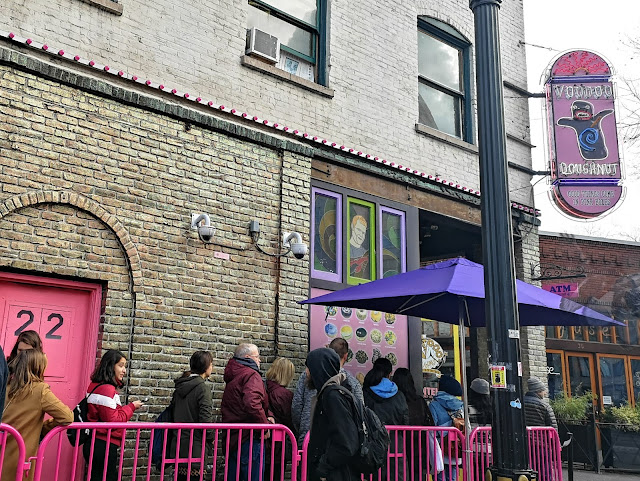 We've been here before and weren't surprised to see a line. We were surprised however, to get in and out with a half dozen for $15 in about half an hour! Well worth the effort! 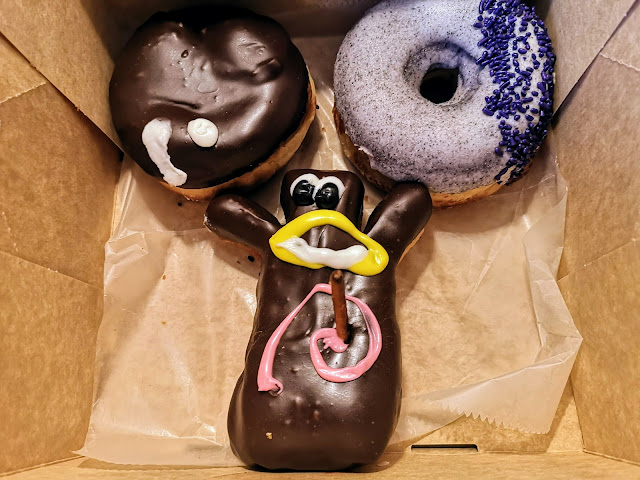 The Voodoo Doll donut did not seem as dangerous as its name. 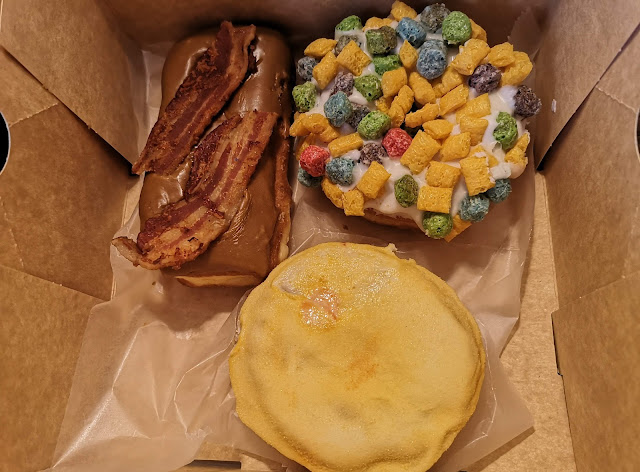 The Oh Captain, My Captain (Captain Crunch) was my favourite but it is also hard to argue with bacon on a maple bar as a solid concept. By the way, for $130, you can walk out with a hand made wooden coffin (too small to be practical) and 3 dozen donuts! Perfect for your next party! This is a mostly G rated selection but quite a few of the donuts are suggestive or occultish in nature. Not sure why you would need that but if you do, its nice to know that its available. You have to visit Voodoo Donuts at least once when in Portland!

By Yes! We're Eating Vegan Again! at December 29, 2018
Email ThisBlogThis!Share to TwitterShare to FacebookShare to Pinterest