There is a curiously located nest of interesting restaurants on 108 Avenue almost directly north of Guildford. In the past, I have been for amazing burgers at Texx Big Burger and recently we had very good Middle Eastern cuisine at Ur. Described in this post is the amazing meal that we had at Malaysian Hut but the area boasts Korean, Filipino, Indian, Vietnamese, Polish cuisines and more. We might haunt the area a bit more in the future but it certainly doesn't feel like hanging out on Robson Street! 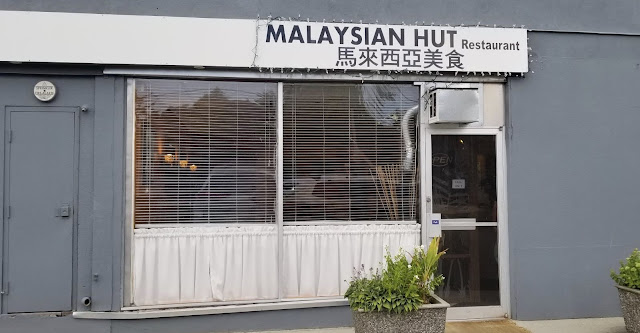 Not much to look at on the outside, Malaysian Hut is located in a strip of businesses just west of 148th. Small and homey and not the least bit trendy, this family run place has apparently been around for over 20 years! 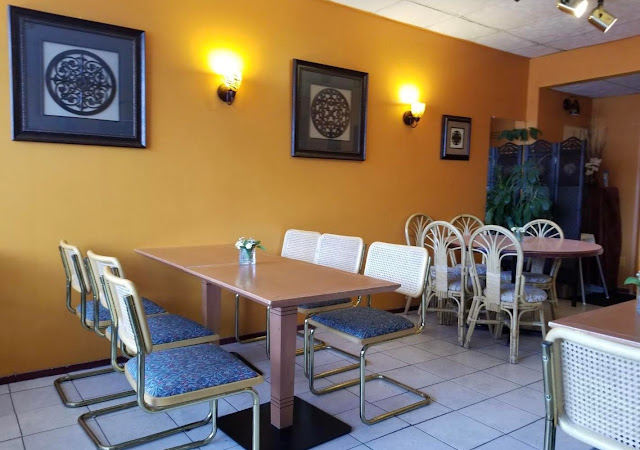 We had the place to ourselves, Saturday around 7 but I noticed that they did some takeout business while we were there.

We stared with an excellent Gado Gado. The tofu was still warm from the deep fryer while the peanut sauce had just a bit of a kick. We loved the crisp vegetable pieces including jicama. 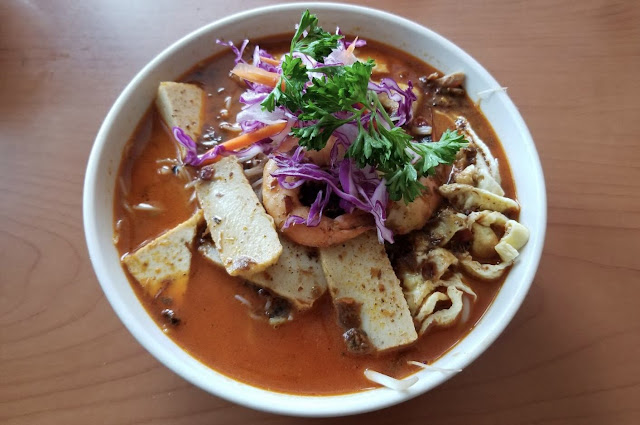 Next came Sarawak Curry Laksa. This was different from the Penang or other versions that we are used to but is specific to the Serewak area of Malaysia, the home of our hostess and proprietor. I looked up the recipe for the paste at the heart of the soup and there is a list of ingredients as long as a Mexican Mole. It included star anise, cardamon, cloves, coriander and nutmeg which really shine through in the delicious final product! It was a wonderful dish with the coconut, rice noodles, fish cake, shrimp and egg but with maybe a richer deeper flavoured broth than other versions of Laksa. 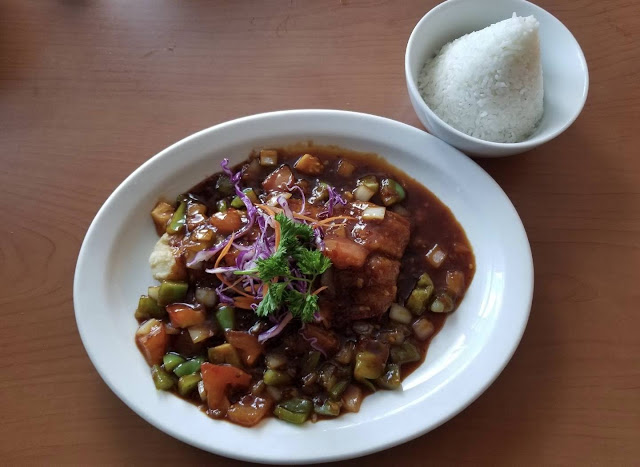 Finally, we had Sambal Fish. This was battered, deep fried cod in a flavourful, more sweet than spicy sauce served with a side of coconut rice. We were not overwhelmed with coconut flavour but the rice was perfect for finishing the sauce. I love the amount of vegetables that were with the fish including bell peppers, tomato and onions. This meal was very much a treat and I found the prices to be more than reasonable. I love to learn something about a country's cuisine that I did not know before (the more regional aspect of Malaysian food) and to find a place that I consider to be a hidden gem. I almost prefer to keep it for ourselves  but go and try them out! You will not be sorry!

By Yes! We're Eating Vegan Again! at June 25, 2018
Email ThisBlogThis!Share to TwitterShare to FacebookShare to Pinterest