We have come a long way since food trucks meant mini donuts at the PNE or a six hour drive south to Portland, Oregon. Now obviously, they're everywhere and let's face it, they can be a little hit and miss. You would think that since we're giving up a comfortable dining room and service that it would be a bargain but that is not always the truth either. Still, I can't help myself when there is a food truck festival. I submit to the indignities of long lines in the hot sun to eat something that may or may not be noteworthy. Fortunately, the weather was decent and the music was impressive (at least while we were there) at the Langley Food Truck Festival.

I had kind of been ignoring the music and was far from the stage until these 5 youngsters launched into a couple of impressive renditions of Led Zepplin tunes. I always say that a restaurant's choice of music makes a big difference to my personal experience and this put a smile on my face! Meanwhile back at the trucks, we chose to start with desert, our basis being the length of the line at that moment at Slavic Rolls. I was surprised to learn that the proprietor was Italian and not eastern European but we certainly did not hold that against them!

Photographed here in what is evidently his signature move (the sprinkling of the cinnamon sugar), these folks are singular in turning out one product, a sort of tubular baked cinnamon roll filled with your choice of many tasty concoctions. We tried ours with apple pie and ice cream and had no regrets. 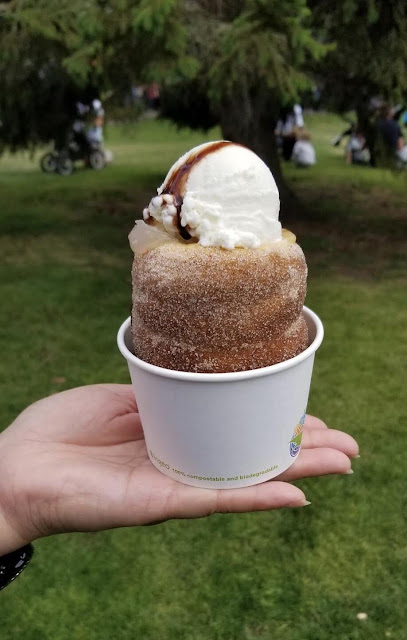 The cinnamon roll itself  was delicious and being both just crispy enough and yet retaining some baked roll softness. At $9, this is probably not a bad deal.

I am not sure why I always feel that mac and cheese is going to be a formative experience. It must have something to do with my childhood. 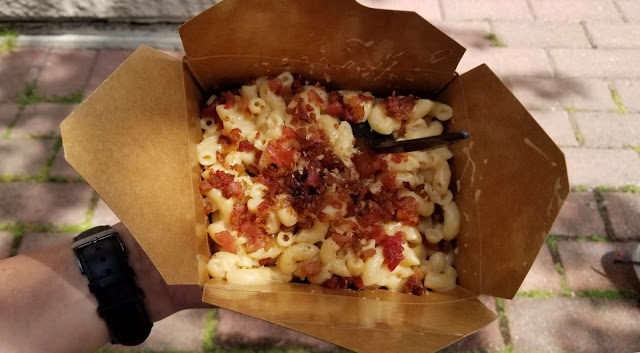 The Kevin Bacon Mac and Cheese from Reel Mac and Cheese (Oh, I get it! Movie themed toppings!) was tasty enough but not the break though we were hoping for. Somehow the base product needs to really be special and by that, I mean cheesy! This was creamy enough and of course, bacon works on everything. There were other interesting trucks at the festival but we had not intended to make a day of it. In addition to food and music, there were quite a number of vendors of hand made and crafted products. So well done City of Langley for your "Summer in the City" series of events including this festival.

By Yes! We're Eating Again! at June 03, 2018
Email ThisBlogThis!Share to TwitterShare to FacebookShare to Pinterest