So I took a header on the ice a couple of days ago and seriously effed up my knee (can I say effed up here?). My fitness routine, lame as it is, has had to be put temporarily on hold. As a result my first day after work without said routine seemed long and boring, especially since my partner works evenings. I need to get healthy fast or find a use for that time, like hey, going for sushi! I feel like I haven't been for a while so I did some research and found myself at Tawara Japanese Restaurant. 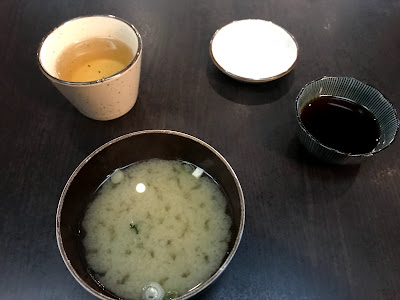 It's a classy little place in the strip mall on the north west corner of 152nd and #10 Hwy. Decorated in black wood and grey tones and the staff look sharp also wearing black. Brown rice green tea (excellent) arrived almost as soon as I did. The Miso Soup that was part of my combo had a good amount of nori which lent a nice flavour.
Not every sushi place has it but I love a sushi combo that provides variety, as opposed to two pieces salmon, two pieces tuna etc. This one had 7 different fish including tai, unagi and tako. The rice was nicely seasoned and all the nigiri was expertly sliced and excellently fresh. No wasabi between the fish and rice but it seems that is the norm out the valley where apparently folks don't generally like it (shame on folks). I have no problem dabbing a little on for myself.
The appetizer tempura was also very good. The batter was light and very crispy, almost lattice work on some of the pieces. Two shrimp with a little pop to them, yam, sweet potato,and squash. served with a sweetish soy based dipping sauce.
Finally (and as usual, I ordered too much) was an excellent Karage Chicken. Crispy and hot with moist interior. The advantage of ordering too much was that Marie got some to take to work the next day! I can think of worse ways to recuperate from falling on my head on the ice! This place seems like a bit of a hidden gem here in a strip mall on the edge of Newton. Give it a try.

By Yes! We're Eating Vegan Again! at March 02, 2018
Email ThisBlogThis!Share to TwitterShare to FacebookShare to Pinterest