I have been wanting to go to Chi Men ever since I saw pictures of their wall art! An interesting space doesn't make the food taste better but it puts me in a better mood and I expect that has an influence on my taste bud to brain communication. 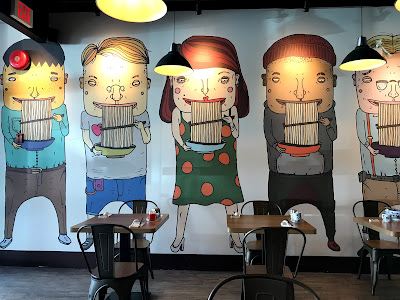 Chi Men is a nice little space on Denman Street that I imagine gets very busy at times. I was there early and was seated right away. As you can see from the art, noodles are the main character here. I enjoyed their Beef Noodle Soup with 1.5mm noodles. There is a choice of 5 thicknesses, 2 of which were available when I was there. They were nicely cooked and maintained a bit of chewiness. I was disappointed to learn that they were not made in house but its not the end of the world. 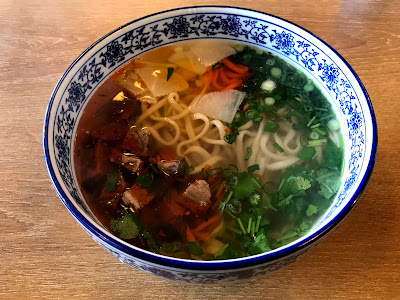 The stock which is made in house was a little salty but had decent beefy flavour. There was a fairly generous portion of tender beef and some nice cilantro, green onion etc. I had a Spanish Mackerel 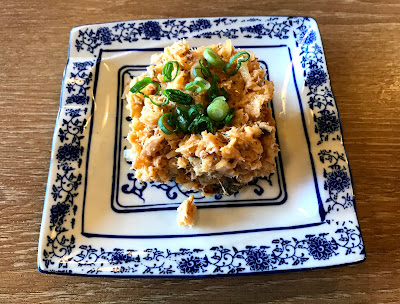 Salad which was frankly wonderful! Not to complicated; just a lot of smokey tasty mackerel and worth the price of admission. Chi Men has a few charcoal BBQ items on their menu in small taste sized portions and a couple of other interesting items to make it an inexpensive and enjoyable spot. 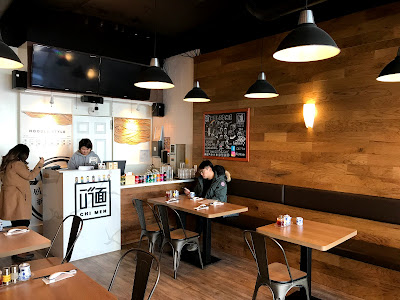 The folks were friendly and efficient while the seating is comfortable and not too crowded. A nice place if you are enjoying English Bay or the West End!

By Yes! We're Eating Again! at February 28, 2018
Email ThisBlogThis!Share to TwitterShare to FacebookShare to Pinterest