My first inclination upon walking into this Indian restaurant which had several customers, none of whom were Indian, was to flee.I hope this will not be considered some kind of reverse racism. I would hate to be offensive to the people who look like me (or anyone else), who were there that evening. But we had a Groupon which would run out soon so we pressed on. Punje Spice is located in the heart of White Rock up the hill, not at the beach, which I kind of like. It feels a little more like they are about the food and you are not paying the real estate premium. 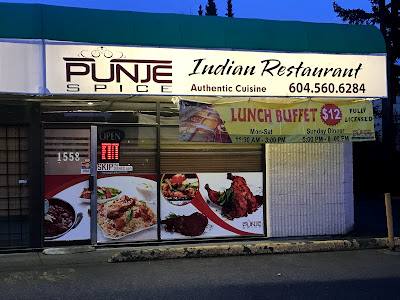 The restaurant is a little threadbare (not too bad)  on the inside but not uncomfortable. Our soft spoken server was very nice but she was the only human that we saw during our visit and could have used some help at times. We started with Fish Pakora which is very much our go to appetizer at north Indian restaurants.
Sadly, we were very disappointed. The pakora had obviously spent some time on the steam table as they were not crispy at all. The whole key to pakora seems to be straight out of the fryer. The dip while somewhat disturbingly neon was nicely cilantro flavoured and tasty enough.
My partner loves her Butter Chicken and this one was quite good. I found it a little too sweet but it was to her liking. It seems to me that the Butter Chicken industry as a whole should get together and find a way to make their dish look more like chicken with a sauce rather than a bowl of sauce with some chicken lost in it. Still it is lovely with rice.
The star of the evening for me was the Lamb Rogan Josh. Same bowl of sauce problem but there was a decent amount of tender lamb just under the surface. The sauce itself is a little more complex with some bay leaf and cardamom leading the way. At medium heat it still made me sweat a bit (which in itself is not a great accomplishment) and was very enjoyable.
We enjoyed the Vegetable Pulao and Garlic Naan both of which are perfect vehicles for all that sauce.
Dessert seemed a bit under whelming at first but you don't need much when it comes to Indian sweets. Gulab Jamun is a little deep fried flour and milk ball with the slight taste of pistachio and cardamom either in the ball or the syrup. Frankly, this was just enough and we enjoyed the sweet note to finish our meal. So having survived the Fish Pakora let down, dinner was just fine. Catering to White Rock is a whole different deal for an Indian restaurant as opposed to being on Scott Road in Delta. I think that they are doing OK and a good choice when in White Rock.

By Yes! We're Eating Vegan Again! at March 21, 2018
Email ThisBlogThis!Share to TwitterShare to FacebookShare to Pinterest