It has literally been years since I was in the Westminster Quay Market as it used to be called. To the best of my recollection, it was on what seemed to be its last legs at the time. I have heard tell though, that some revitalization has taken place and even some good eats have appeared there since then.
So I wandered through one sunny afternoon! I was drawn not inexplicably into Longtail Kitchen (of course, I had read about it) and I am not sorry about that! Seating along one side affords a lovely 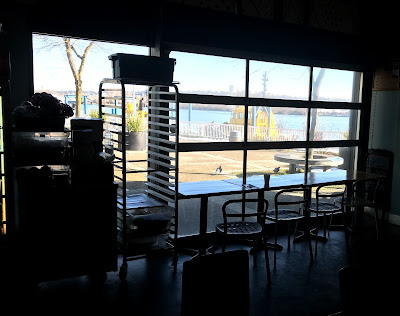 view of the Fraser which on this rare sunny midwinter day was fortifying.
What came next was something that I did not expect. Now, I am not given to superlatives and I think that typing OMG is lazy and stupid but; OMG! These are the best chicken wings that I have ever
eaten! The staff were concerned by the grown man reduced to tears at one of their tables. Aside from crispy and perfectly moist inside, they were topped with a mixture of fried garlic, onion, an herb which I cannot positively identify and...sugar! One of the critical keys is the tart tamarind dipping sauce which turned it all into magic!
Once I recovered, I ordered a couple of items to go! The Hand Pulled Roti is not exactly Roti Canai in that the peanut sauce was chunky and not curried. It was however, also very good as the roti was crispy despite the longish trip home and the sauce was excellent. I also ordered Burmese Fried Rice which was topped with a fried egg! It was ever so slightly spicy with a good portion of chicken and other tasty stuff. This is basically part of the market food court and service is counter only but it is a nice place to enjoy some very good south east Asian eats!

By Yes! We're Eating Again! at March 06, 2018
Email ThisBlogThis!Share to TwitterShare to FacebookShare to Pinterest