The recent plant based bowl challenge by Vancouver Foodster got me wondering about what else might be available out there for the genuine vegetarian (unlike myself) or just anyone who wants to eat healthy or without guilt on occasion. So I thought I would start by investigating some of the places that specialize in salads and bowls and such. I have always tried to steer clear of shopping mall food courts (except for Asian mall food courts which for some reason are a completely different deal) and chains too but the web site for Freshii convinced me that it might be worth bending both those rules, at least this once. 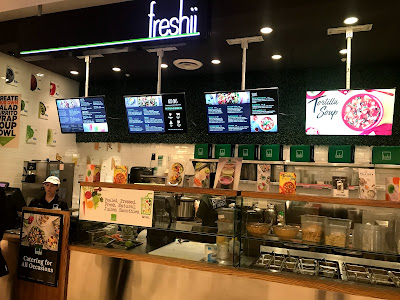 Freshii has a lot of choices including soups, bowls, wraps, burritos and juices. On the web site they do hit you with a little more of the woo than I am comfortable with such as cleanses and eating clean. Do some serious research before you start spending money on that stuff, even if you heard it directly from the mouth of Dr Oz.! I know that I came here with the intention of investigating the vegetarian options but the fact that there was a Cobb Salad on the menu caused me to stray right out of the gate. And you know, for a salad built in a mall kiosk, it was
actually quite tasty. There was a nice mix of greens with corn, tomato, avocado, a boiled egg and what makes a Cobb Salad irresistible to me, blue cheese and bacon bits. OK so the bacon bits and blue cheese were both a little clumpy, no doubt because of sitting in serving bins and it wasn't a Cobb arranged in nice rows  but it was decent and tasty at $9.99.
Next came the Oaxaca Bowl and this was also quite good. Brown rice which was nicely cooked and not mushy and with black beans provide complete protein (and you can still add tofu for $1.99). There was a bit of beet salad, some fresh kale ( a piece of which I wore in my teeth a la Ace Ventura for too long much to my embarrassment), crispy won-tons, avocado, corn and a spicy yogurt sauce. Now this I can definitely get behind. Not too pricey at $8.99, and it was satisfying, tasty and almost guilt free!
Finally, I went against all my instincts and ordered from their juice menu. Now normally, I drink water, sparkling water, coffee, tea and occasionally a diet Coke. I eat fruit and I eat vegetables and I do not drink them. I don't believe that is the healthy way to consume them. But for the sake of the research, I dove into the void! This was Green Energy Juice and contained kale, spinach, romaine, green apple, cucumber and lemon. I don't know what to say....it tasted a little too much like lawn. The apple, cucumber and lemon seemed to be the source of some brightness but overall, I will not be paying $6.50 to quench my thirst in the future. Still I consider the Freshii experiment to be a win. Lots of healthy choices with whole grains and beans, some fruit and vegetables and even some meat for the carnivores!

By Yes! We're Eating Again! at March 15, 2018
Email ThisBlogThis!Share to TwitterShare to FacebookShare to Pinterest