I obsessed, some would say too much, over the name Buckstop. What did it mean? Where did it come from? Antlers are certainly in evidence here, in the logo and so on , 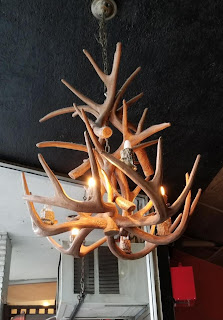 so I get the deer thing, but venison is not on the menu and none of the ruminants dropped in for refreshments  while we were there. Is it a masculine reference to what a Saloon might have been say 150 years ago? Shame on me for even suggesting such a thing and rest assured, there were mostly couples and even a toddler present! How about, 'the buck stops here' (there is such a drink on the menu)? Nope, that doesn't work. Now, I know what you're thinking...the name sounds cool and there is some cute potential word play. Just get past it and order something to eat!
My partner and I enjoyed sitting at the front window, watching the West End folks drift by and loved the restaurant soundtrack. We listened to Eels, Johnny Cash, The Charlatans (happily not a single Bob Seger song) and munched happily on Deep Fried Pickles! They were hot out of the fryer, crispy and

tasty,with a slightly spicy Cajun dipping sauce. Very nice! Next came Corn Bread and Hush Puppies with sweet butter. Both were moist and sweet with a
nice coarse cornmeal texture and I began to worry that I would not have room for the next offering!
Then it arrived! Smoked chicken, beef ribs, a pulled pork sandwich, fries, coleslaw and beans. This was a Groupon thing so you won't find it exactly on the menu but they do have some nice platter and combination meals available. This is barbecue. It means long slow cooking over low heat with smoke. Do not confuse it with the food you cook on your grill at home! The chicken was, oh so smokey, a taste that stayed with me and on my fingers ( I am not complaining). Despite brining, we did hit the occasional dry spot on the exposed meat. The ribs (there are 4 moist, meaty ribs under the chicken, not so visible in my photo) had a bit of a spicy kick and were very good. The coleslaw was refreshing and vinegary and also one of the stars of a very good pulled pork sandwich. Again with excellent smoke. I am not enough of an expert to tell you what kind of wood they use, just that it is the right kind. I found that the kitchen is a little shy with salt (not normally a bad thing) and both the chicken and the ribs could have used a little hit to make the flavours stand up a bit more. The fries were tasty (and salted) and the beans were firm, cuminy and smokey. This is a small place, friendly staff, pleasantly noisy and for those seeking libations, there is an extensive listing of Bourbon et al. Make a reservation and try some decent barbeque!

By Yes! We're Eating Vegan Again! at February 11, 2018
Email ThisBlogThis!Share to TwitterShare to FacebookShare to Pinterest