Many of us have more recently become familiar with Filipino cuisine than we are say, with Indian or Chinese food. Of course, we know that the cuisines of those countries vary largely from region to region such that we have Cantonese, Sichuan and Shandong among many other distinct cuisines from China. Why then am I surprised that the regions of the Philippines also have their variations, either of national favourites or their own unique dishes? At the Filipino Noodle Joint, you can try familiar dishes but with a bit of a regional twist, namely the region of Ilocos! 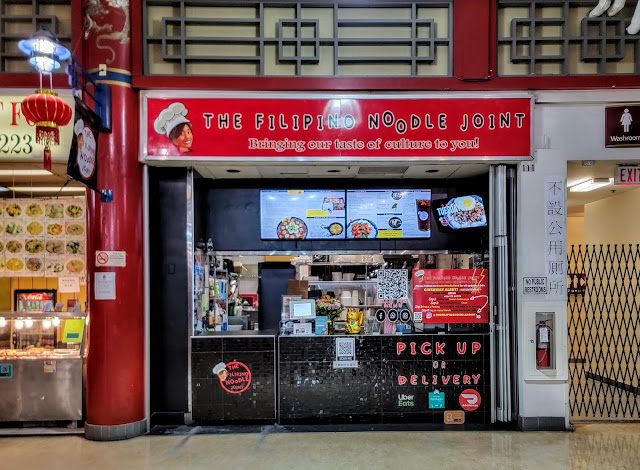 Ilocos is an area north of Manilla and on the west coast. As fans of You Tubers Jan and Ann, we have followed along as they explored this beautiful region of the Philipines. 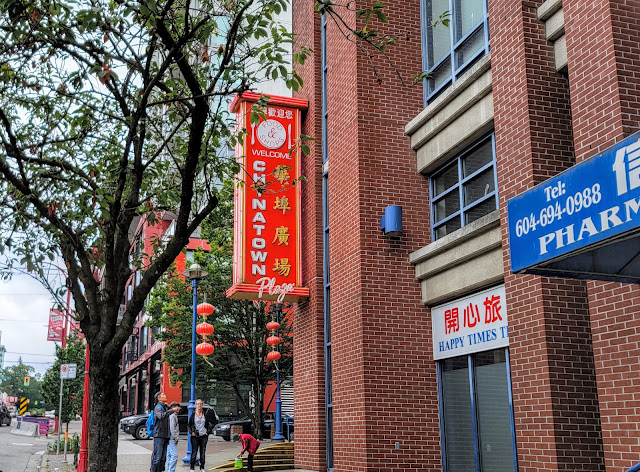 The Filipino Noodle Joint is located in Vancouver's Chinatown, in the Chinatown Plaza foodcourt on Keefer a block west of Main. 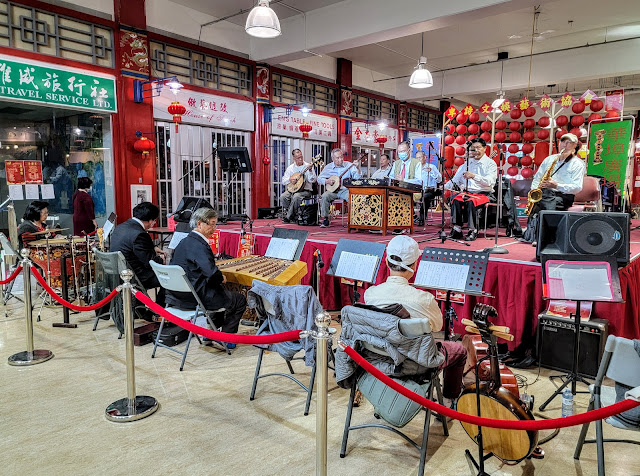 As the Chinatown Festival was in full swing on this particular weekend, we enjoyed live music with our lunch. I'll admit, that I am not an expert when it comes to Chinese music but we enjoyed most of what they played with the exception of the drummer occasionally raining down hell on the cymbals. 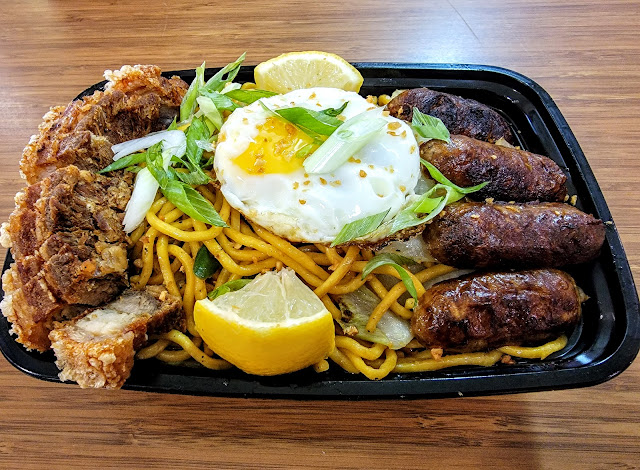 We started with Ilocos Pancit. I have read that there are 24 varieties of pancit in the Philippines so I will not bother reviewing the differences. The stir-fried egg noodles were perfect in this being just slightly al dente. The dish came with a generous amount of bagnet (Ilocos version of lechon kawali, which is boiled and then deep-fried pork belly) which as you might guess was crispy and rich. There was also a serving of Ilocos Longanisa which is seemingly a little softer and fattier than the generic longanisa. Mharie was less than in love with this version of the familiar sausage. The fried egg on top was a nice touch. 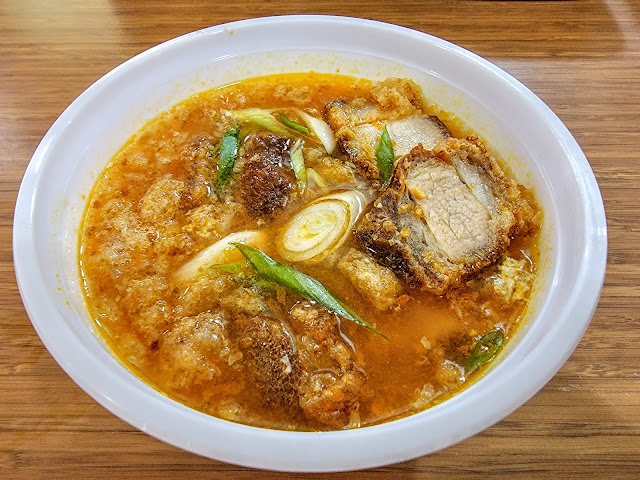 Ilocos Miki with Bagnet Toppings also made it to our table. We found the chicken broth and noodles to be on the light side and might have profited from some salt but the toppings (bagnet again and some vegetables) made it a nice savoury soup with some interesting textures. 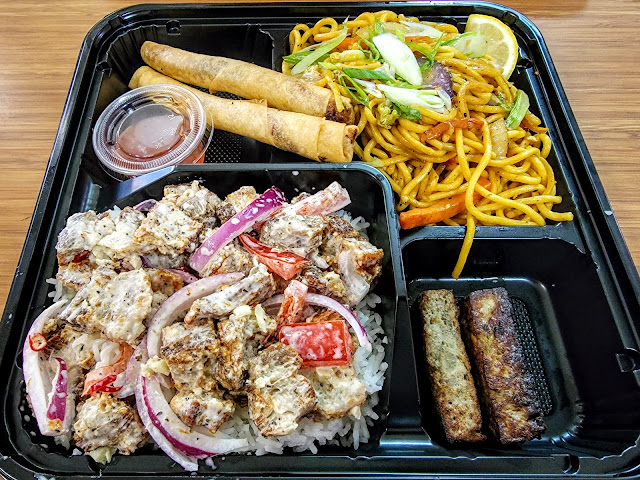 Under the menu heading, Baon Boxes, we decided to try Dinakdakan, a word I cannot seem to say or spell. First of all, Baon means, "food on a journey" in Tagalog and there is likely a similar word in Ilocano. It is approximately a bento box. Look up a recipe for the traditional dish, dinakdakan, and you will likely be startled by the ingredients. Fear not, we are quite certain that the FNJ recipe does not contain pigs' brains and we could not taste liver. Also, the main ingredient was again pork belly and not snout. A delicious creamy dish (my favourite of the visit) we could taste the calamansi, ginger and chilli. Very nice! Also served with rice, pancit, eggplant and spring rolls, this is a substantial meal for $18. 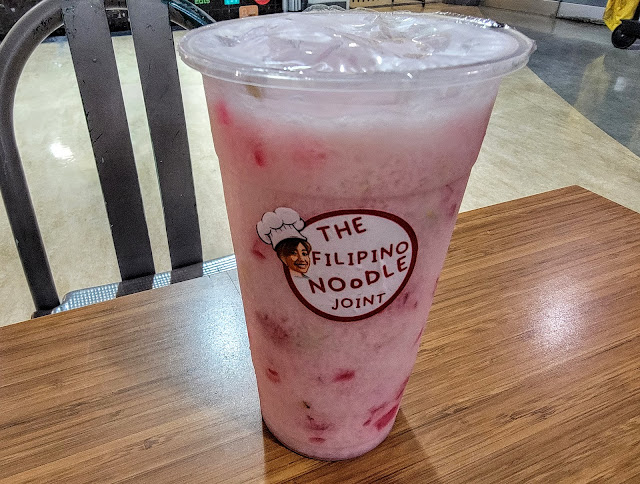 Finally, we tried Guinumis, a coconut drink with toasted puffed rice. Complete with sago pearls and gulamon (a gelatin sort of thing but made with seaweed - vegan!). This was less sweet than the usual boba and pearl tea and all that stuff. Also, the rice gave it some interesting texture. I liked it but my wife was less keen. 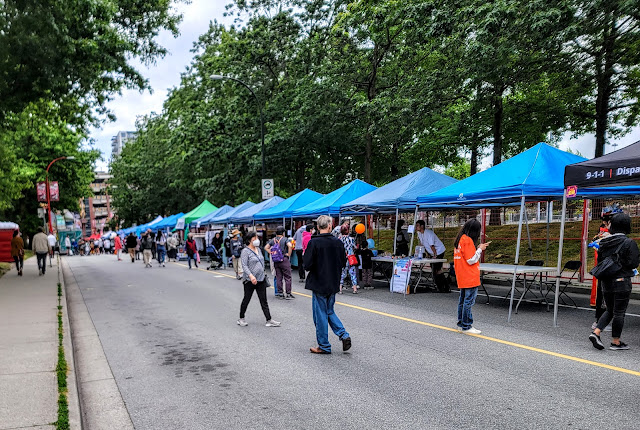