It has been 4 years since we attended the Sakura Days Japan Fair at Van Dusen Gardens. I can't remember for sure but assume that it was cancelled in 2 of those years (you were here, right?) and I don't have an excuse for the 3rd intervening year. The bottom line is that it is nice to be back at VanDusen Gardens. 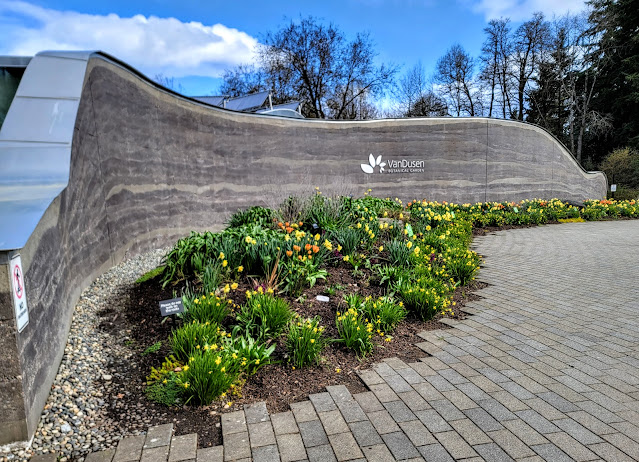 I will go ahead and say, I told you so to everyone who did not make an effort to get out of bed and get going in time to be there when the gardens opened at 10 (10?...already the middle of the day!). The gardens were quite busy right from the start (almost like we've been waiting 2 years to have something to do) but as the day went on, the lineups to get in and for food reached ridiculous lengths and forget about parking anywhere near the gardens. 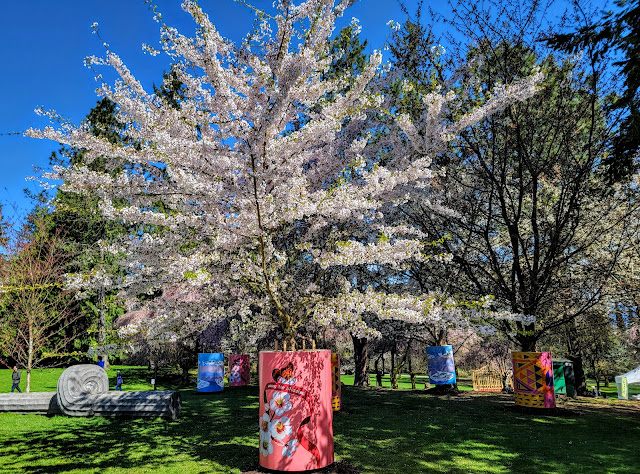 Our visit started off beautiful, if a little chilly, with the cherry blossoms in full bloom. We were hungry enough that it seemed like a good idea to get something to eat fairly early on and so we visited one of the several tucks/ trailers that were set up to nourish visitors,. 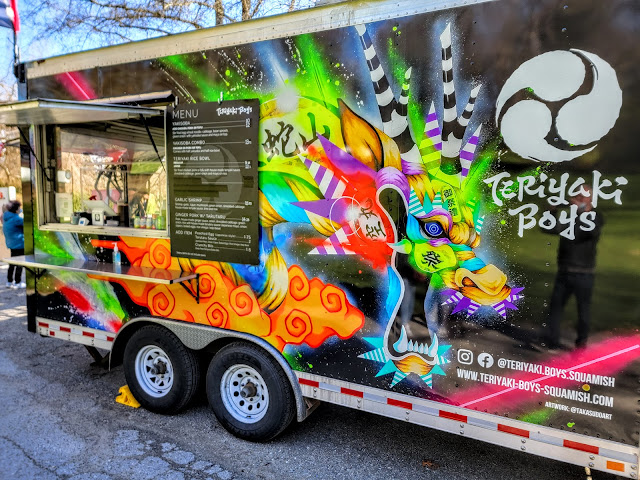 Teriyaki Boys is from Squamish and specialize in, you guessed it, Teriyaki in various iterations with rice and noodles. 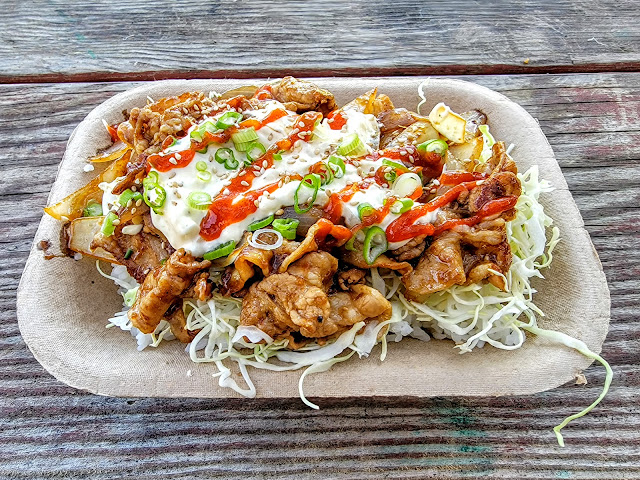 We ordered their Ginger Pork with Tarutaru Sauce. I had to ask what tarutaru sauce is and a friendly young server explained it to me but their website just calls it tartar sauce. I could have figured that out. Anyway, it was very tasty with pork belly, the finely shredded cabbage that we love, and sauce all on rice. 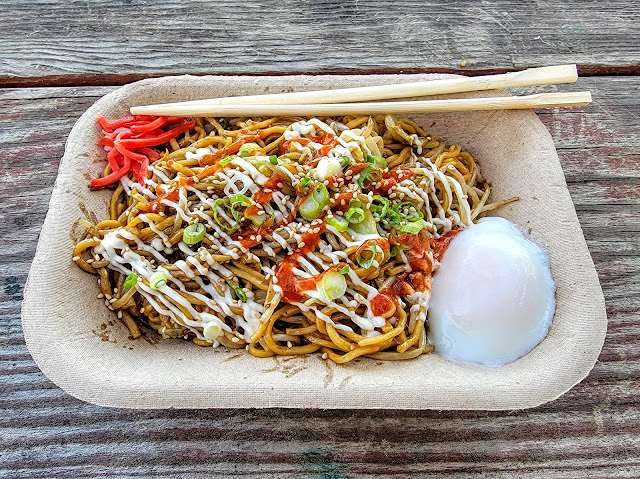 We also tried their Yakisoba (ordered a poached egg on the side) which was also nicely done. Nothing too fancy here just the stir-fried noodles, savoury-sweet sauce as well as some green onions etc. Mharie's granddaughter was with us for the day and she had the Teriyaki Rice Bowl. She asked for them to hold the vegetables as many teenagers (she is not quite a teenager yet) are wont to do so no cabbage etc. It was still a tasty bowl but a little salty without the shredded cabbage and mayo to mitigate the saltiness. Our intention all along was to come back later and try some other things at different trucks but the length of the lines forced us to opt-out of that idea! 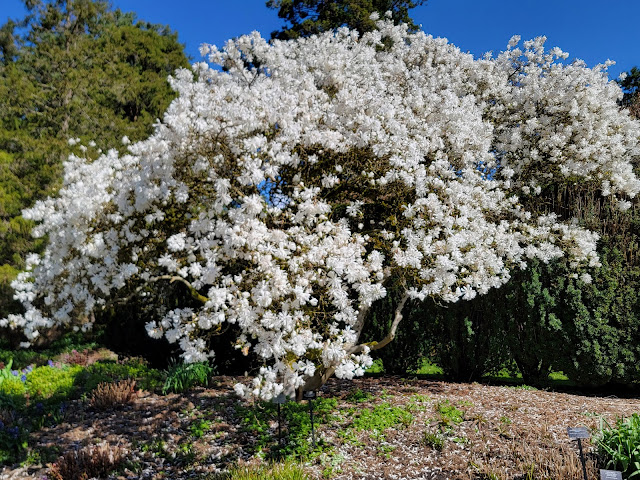 We enjoyed the Japanese artisans, haiku workshop, and Japanese performers at the Cherry Stage, as well as the rest of these beautiful gardens. It turns out this could well be called the Magnolia Festival as blossoming Magnolia trees might have been as amazing and common as the cherry trees. 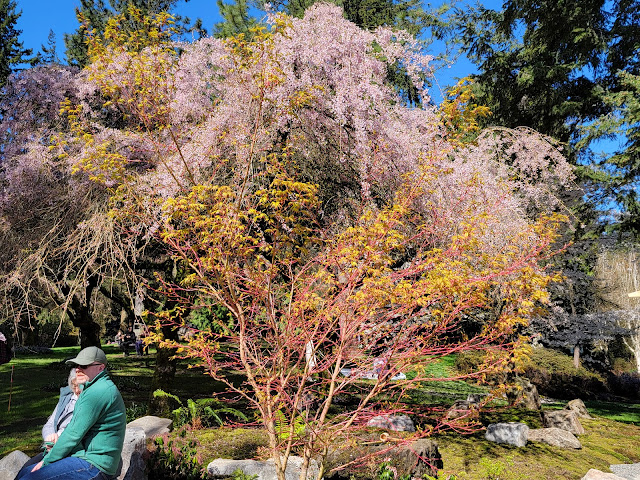 Still, Cherry Blossom Festival is our thing in Metro Vancouver, isn't it? 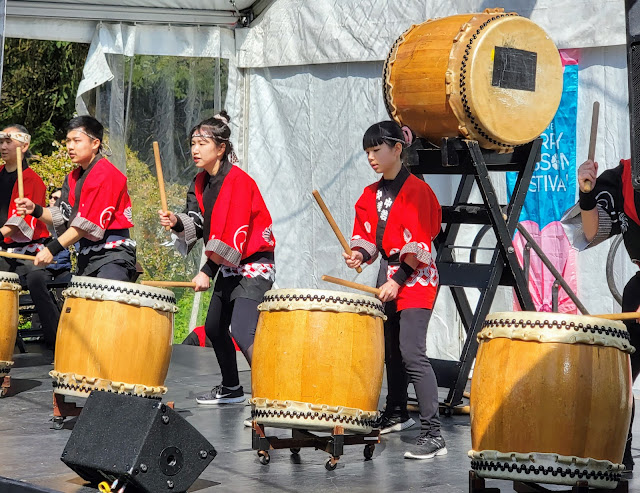 Our last stop was back at the Cherry Stage for Go-Taiko, a young people's group that performed on the Japanese drums. 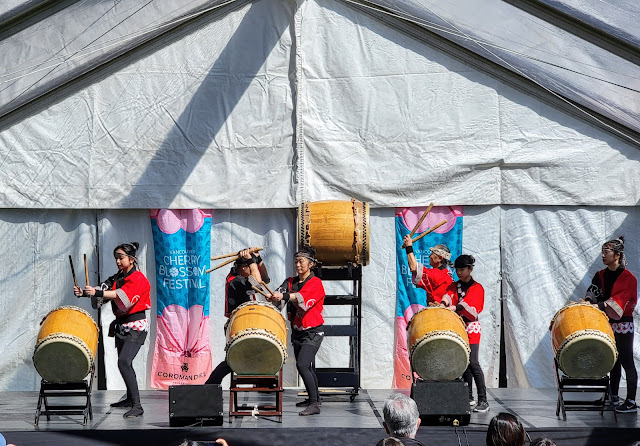 It was one of many moving performances that highlighted Japanese arts at the Sakura Days Japanese Fair. 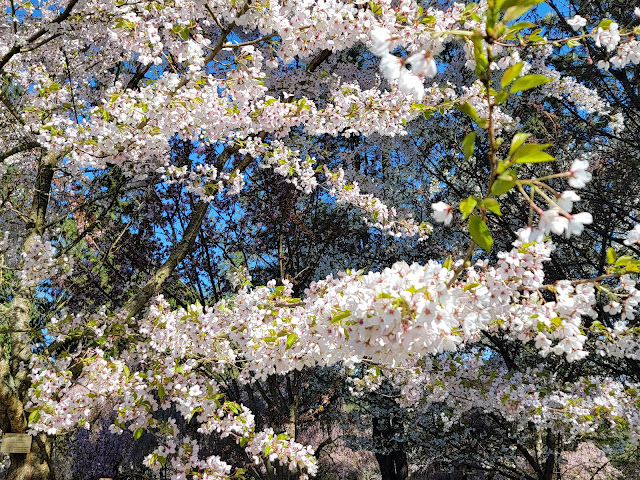 It was a lovely day and a lovely festival. Don't leave it too late next year! Tickets were available online but it would be worth considering for the society in charge to provide windows to avoid the waits that many people must have experienced. We're glad that the wonderful cherry blossoms are available all over Metro Vancouver and even out in our humble Aldergrove.
Teriyaki Boys
Food             3 1/2 out of 5
Comfort        NA
Service         4 out of 5
Value            4 out of 5
By Yes! We're Eating Vegan Again! at April 10, 2022
Email ThisBlogThis!Share to TwitterShare to FacebookShare to Pinterest