So back at the beginning of February, I saw an article on the Daily Hive about the coming pop-up by movie maker Kevin Smith called Mooby's named after the fast-food restaurant featured in his Jay and Silent Bob films, but dating back to his 1999 film, Dogma. Admittedly, I had never seen a Jay and Silent Bob movie (or any other Kevin Smith film), but the menu was good and the hype made it sound like it might be a fun thing to be a part of! So I placed an order and then set about researching to see what I had gotten us into! I first watched the most easily available movie, Jay and Silent Bob Reboot. I have to admit that I thought it was one of the worst movies that I had ever seen! I guess that I have outgrown adolescent and crude humour because it was truly painful. There were some funny moments, I will admit and some of the cameos were truly amazing but overall....? Refusing to give up, I searched Netflicks and found Mallrats. This turned out to be another painful movie but again there were moments and impressive cameos. My favourite part was Ethan Suplee's character trying (all day long) to see the sailboat in the autostereogram (do they still make those?). The stupidest thing of all is that after these two movies, I still wanted more! Kevin Smith's world is full of recurring characters and themes with comic book side themes and even this restaurant and I needed to figure out the allure! But back to Mooby's! 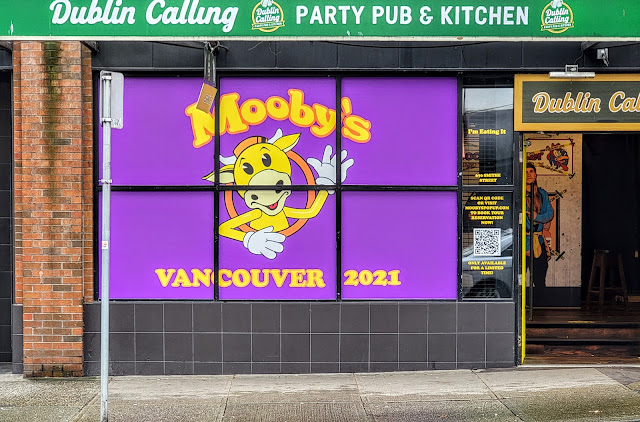 We had placed our order, paid the exorbitant price of $55 including not one but two service charges, and got a pickup time. We arrived at 4:15 Sunday, took a few pics and selfies, paid another $4.20 for a can of Coke (I wanted the themed cup!) and drove home. 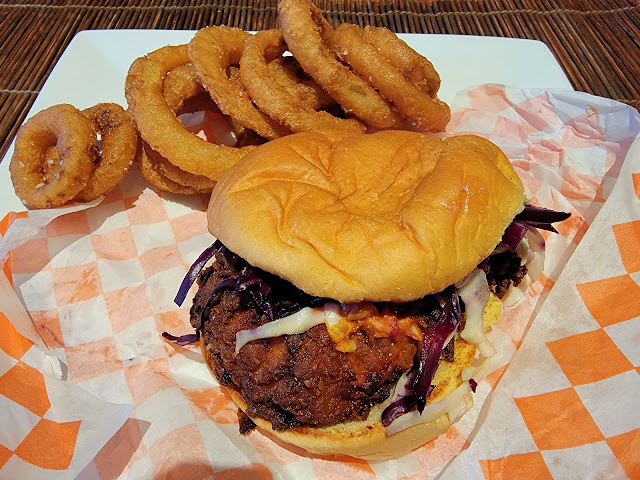 One of the highlights of this thing was the names of the sandwiches and sides which reference the movies (mostly). First up was the Cock Smoker Chicken Sandwich (no, really) and Onion Rings to Rule Them All (the latter being more of a Lord of the Rings reference but the former is a Jay and Silent Bob thing). To be honest, this was not terrible. The o rings were crispy and the sandwich had a bit of spice to it with some decent slaw and a decent bun. I know that this is less about the food than the schtick so I was slightly impressed. 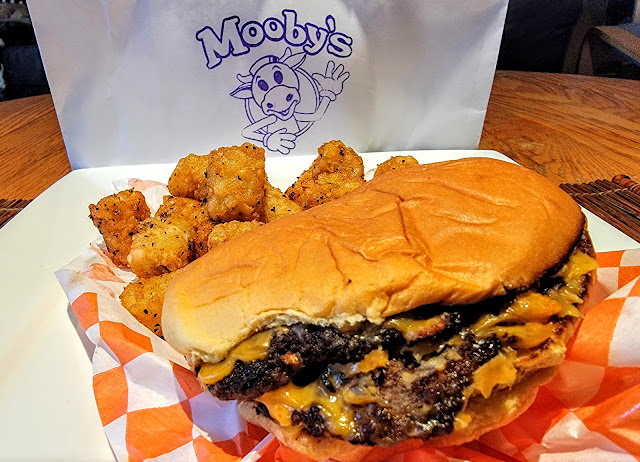 Next was the Cow Tipper Burger and Hater Totz. Again, not terrible! A pretty good burger with a fair bit of cheese, decent beef, a decent bun and a couple of pickles. The tots were spiced up a bit (not that anyone with an oven can't do tots) and crispy. 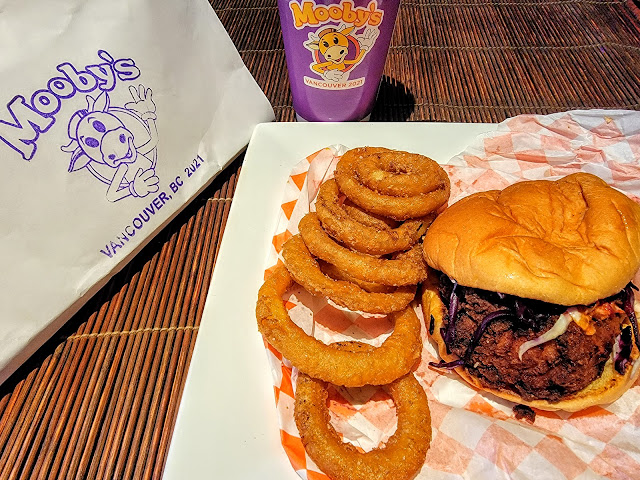 So that was our kind of lame experience. The pickup location at Dublin Calling was sort of dark and dingy and not as much fun as it could have been. Service was curt and the whole thing did not do a lot in my mind for the Kevin Smith Brand. 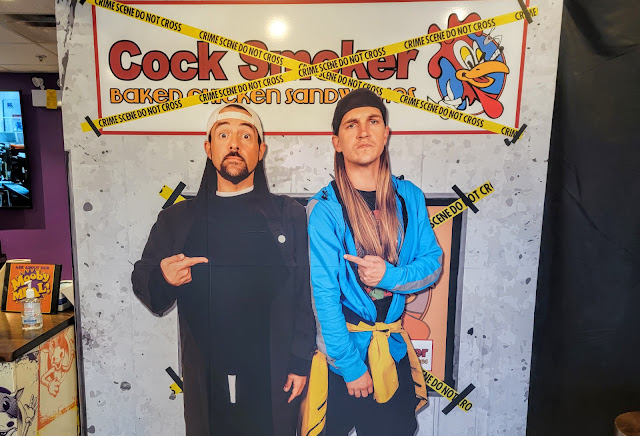 N.B. I have watched yet 2 more KS movies (obviously being a glutton for punishment and a bit of a sucker). Chasing Amy was again not great as they attempted to tackle something a bit deeper but not very well. Is it possible that the movie was 20 years old that it didn't work for me? I love lots of old movies that have endured well enough. Also, I watched Dogma, learned the origin of Mooby and again wondered at the star power! My favourite moment was when the last Scion (Linda Fiorentino) asks God (Alanis Morisette) about the meaning of life. The answer is a wry grin from God and a tweak on the nose! Other than that....meh.
By Yes! We're Eating Vegan Again! at March 14, 2021
Email ThisBlogThis!Share to TwitterShare to FacebookShare to Pinterest