I don't always get to pick where we are going to eat...I know, right? Well 'somebody' wanted to go to Rio Brazilian Steakhouse. I had been to a Brazilian steakhouse in Vancouver many years ago and found it to be a bit meh. The appeal of a meat fest is somewhat limited and I didn't feel like there is anything involved that couldn't be replicated on a grill at home. So I am big enough to admit that I was pleasantly surprised by this place in Coquitlam. 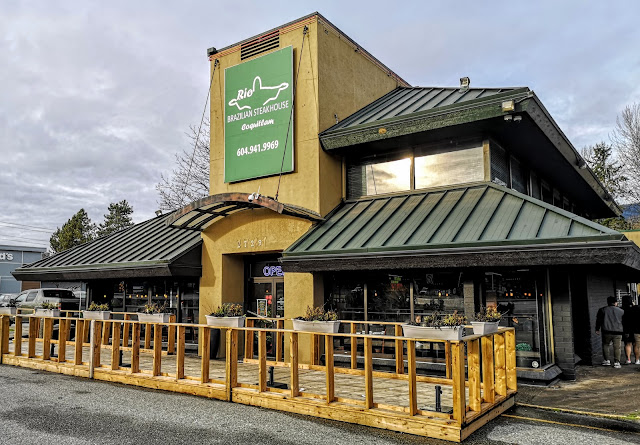 Located a couple of blocks west of Coquitlam Centre on Barnett Highway, RBS is housed in one of those many repurposed Bino's (or maybe Dino's?) buildings from many years ago. Spacious inside, it was not too busy on Sunday afternoon. 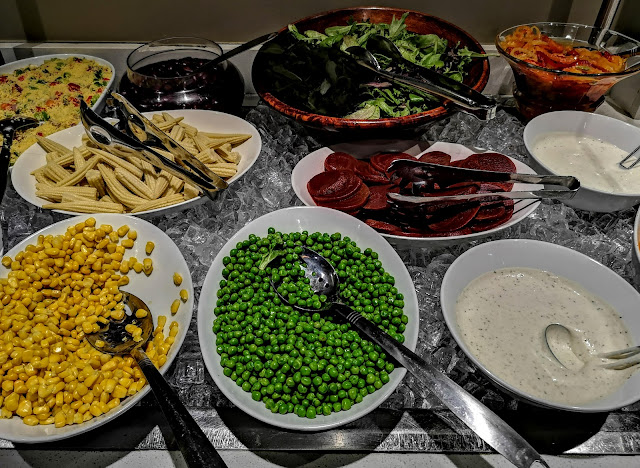 There is a seriously decent salad bar in one corner of the restaurant where we started our journey. 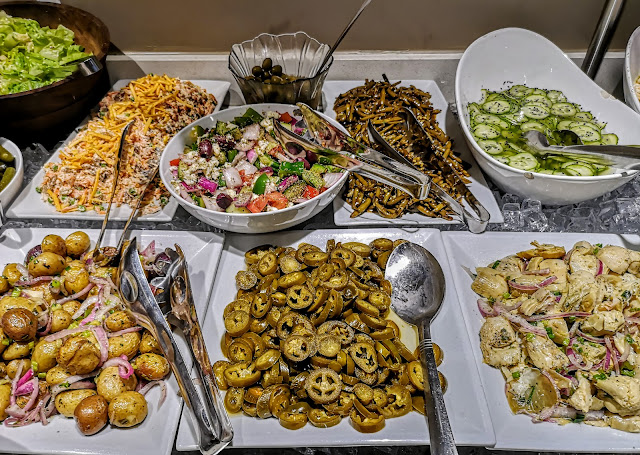 Included on the salad bar are many of the usual choices but some creative ones as well including a couple of hot dishes such as white fish fillets in a cream sauce which I did not try. There were two different kinds of pickled green beans that I could have loaded up on alone and written a contented review. 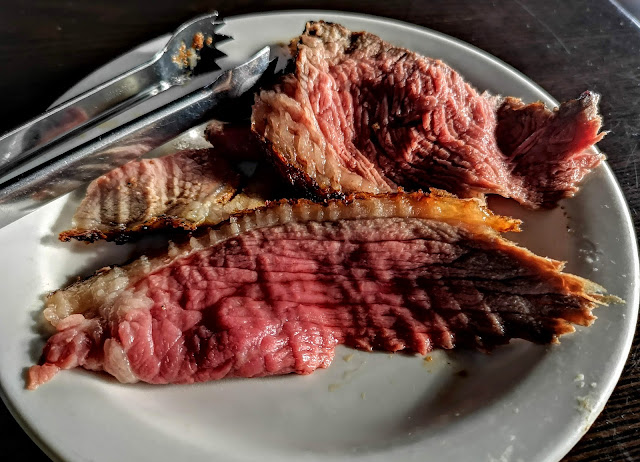 Soon meat began to arrive on skewers. Not too surprisingly, the $26 lunch meal is limited to the more pedestrian roasted meats. So our choices were top sirloin, tri-tip, roasted pork, chicken legs, chicken hearts and pork sausages. Dinner which is about $10 more (?) includes lamb, some more premium beef and a few other choices. No worries though as my favourites items came from a second buffet area which had some more traditional Brazilian dishes. 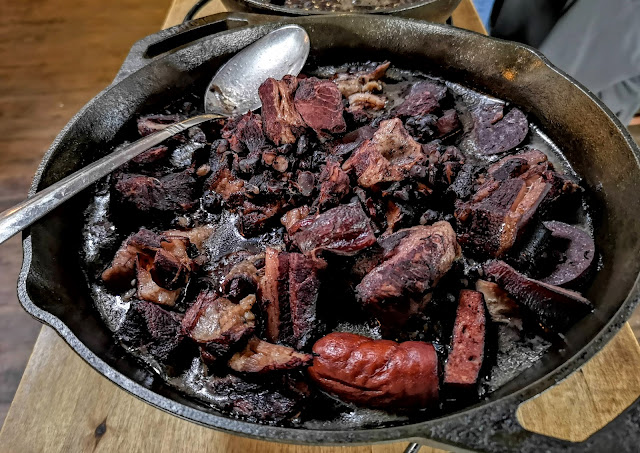 There was a braise/stew of pork, pork sausage, bacon and black beans. It was rich, rustic and meaty and I would order it off of an a la carte menu. I think this was Feijoada, a national dish of Brazil. 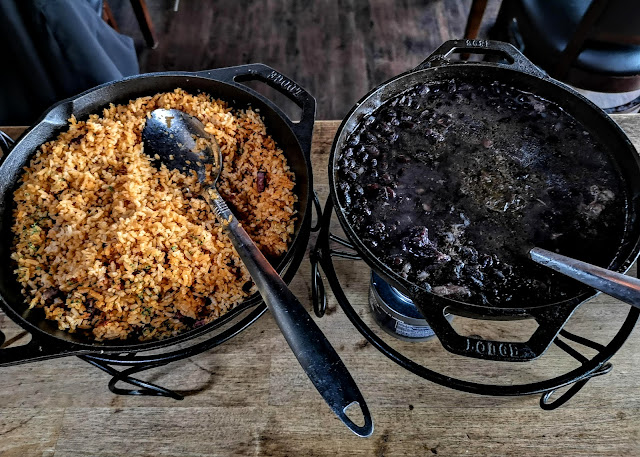 Next to that was rice and more black beans. I loved the cast-iron Dutch ovens. 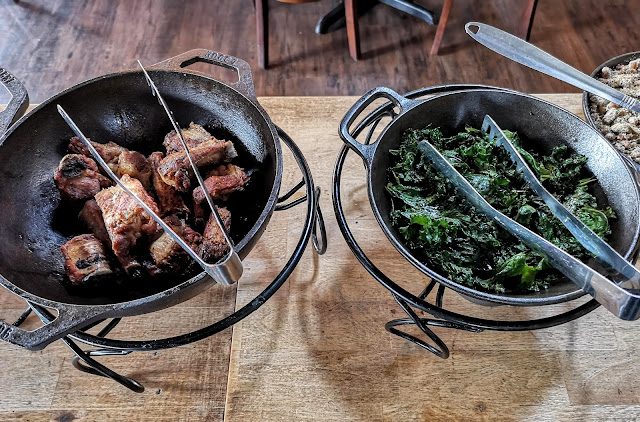 There was pork belly and kale (the greens were way over-salted). 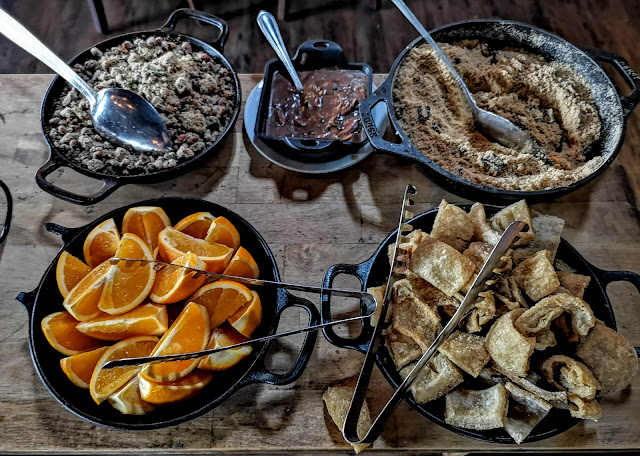 And finally some garnishes including pork cracklings, an impressive hot sauce and toasted cassava flour. These Brazilian dishes made this a bit more of an adventure for me compared to meat roasted on spits. I could have skipped to this part and been perfectly happy. 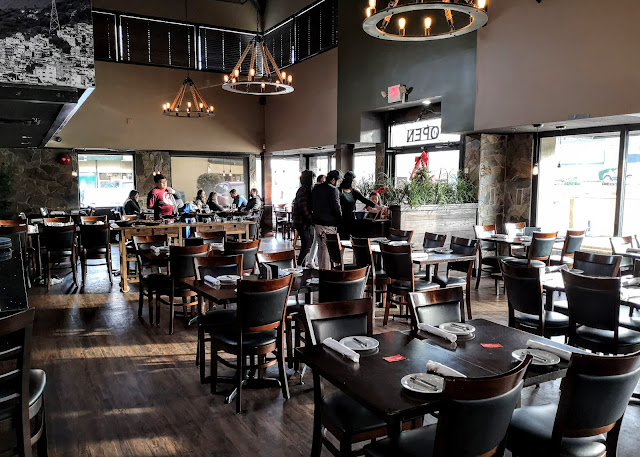 The folks who brought the skewers around were accommodating and friendly and our main guy was actually from Sao Paulo so he knew what he was talking about. In fact, ownership of the two locations is also a Brazilian family. Lots of room here and pleasant surroundings.
For what its worth, and despite my original misgivings, we give Rio Brazilian Steakhouse, 4 out of 5.

By Yes! We're Eating Vegan Again! at January 06, 2020
Email ThisBlogThis!Share to TwitterShare to FacebookShare to Pinterest