I was excited to be tagged by Barakah.eats on a Surrey Urban Farmer's Market post as I would not have known about it. Held Saturdays from 10 to 2 in the Surrey Civic Plaza, we did not catch sight of the Good Doctor! 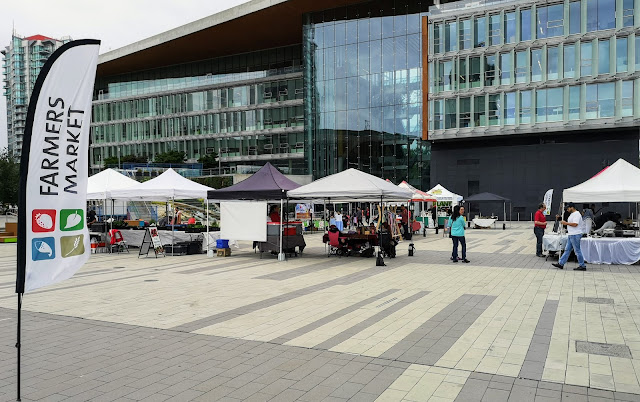 On the miniature side so far but these are early days and I am sure this will gather steam. We were more than a little impressed by the vendors that we met. 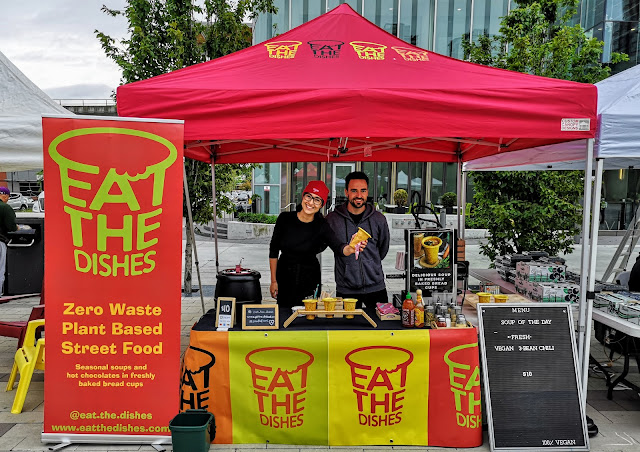 Eat the dishes was our first stop as we had to figure out what this was about! Not bread bowls in the sense of a great loaf of bread filled with clam chowder but bread cups are the basis of this and a great leap forward in terms of zero waste. 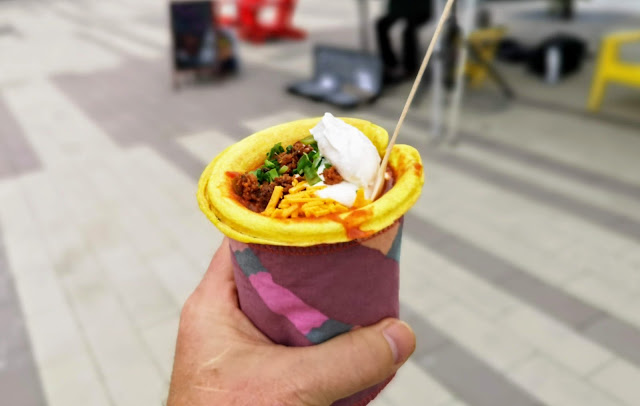 Today we had vegan chilli with all the trimmings served in a bread cup. The cup is made on a hot mould that these folks had made to their specifications (the mould machine that is)! It is one of a kind so far but I expect this idea to catch on. By the way, the chilli was tasty but we ate the entire cup also! It had soaked up the chilli flavour but never came close to leaking! Excellent! Also, the napkin you see wrapped around the cup is cloth and therefore is also not destined for the landfill. 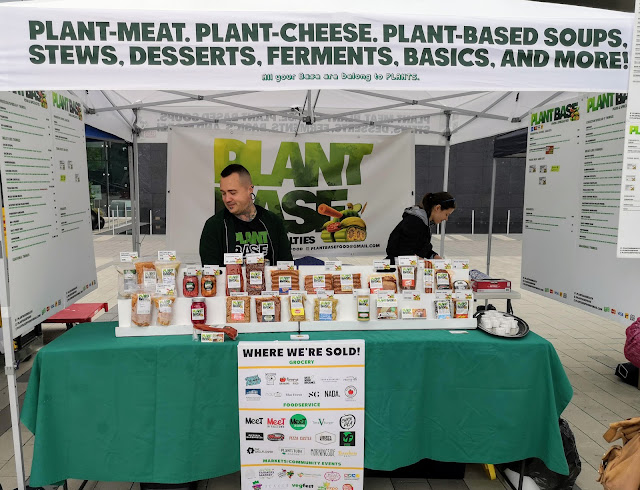 Our next stop was 'Plant Base' who offer vegan products. These folks have been around for a while but I have not been paying enough attention. They carry an interesting range of items of which we tried two. 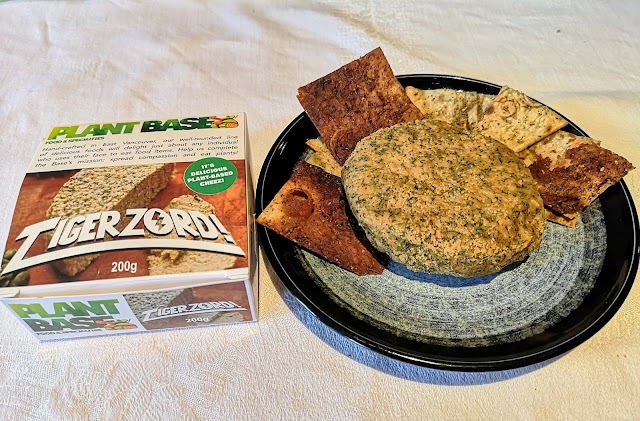 First was Tiger Zord Plant Based Cheez! (Cheez. I love that!) This was a herbaceous almost firm cream cheese, spreadable ...cheez. It was tasty on crackers and melted not too badly. At $12 it is not cheap but tasty, healthy, animal and eco-friendly. 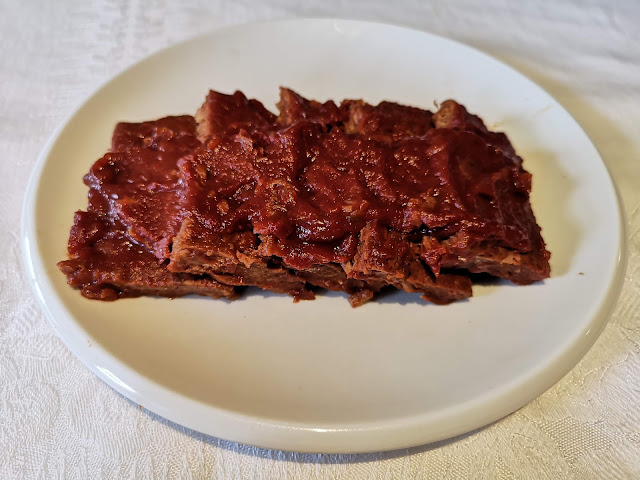 We also tried their vegan ribs. You wouldn't mistake them for meat but the texture was close to pressed ground meat. Let's say they were hugely better than McRibs and I've seen some of you eating that junk. They had decent barbequed flavour. There is always a bit of a tradeoff but this is pretty good at $9. Being vegan or vegetarian does not mean you are eating this kind of product all the time. It provides a treat or a change (just like buying a rack of frozen BBQ ribs at the grocery store might be...or McRibs). 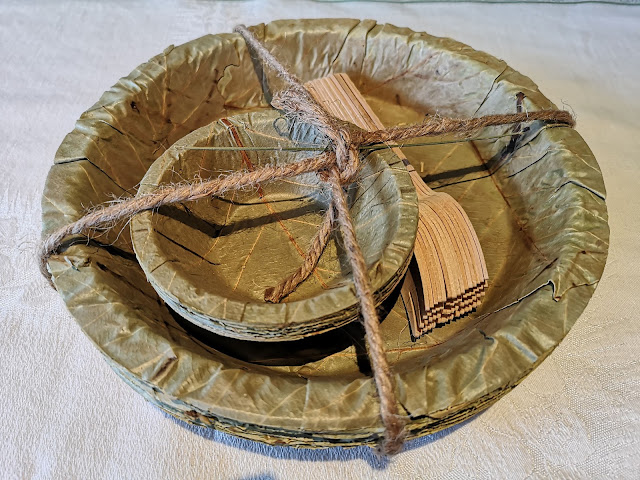 Folium is a company that, builds 'leaf' plates and bowls. These are stitched together and leak-proof... Nice to see someone working towards zero waste!. 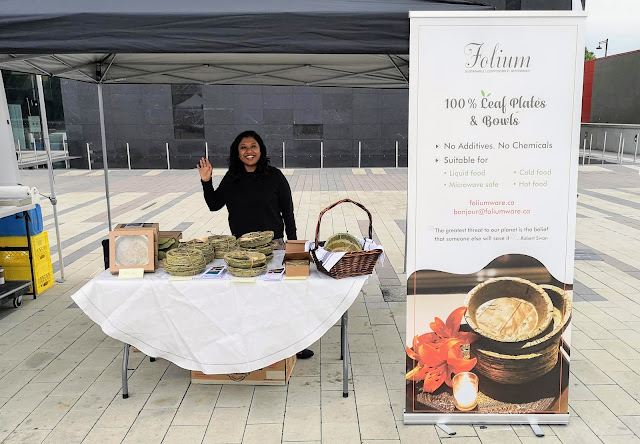 Having met some new vegan friends, I had to sneak around to meet our carnivorous Barakah friends who had clued me in to the market. 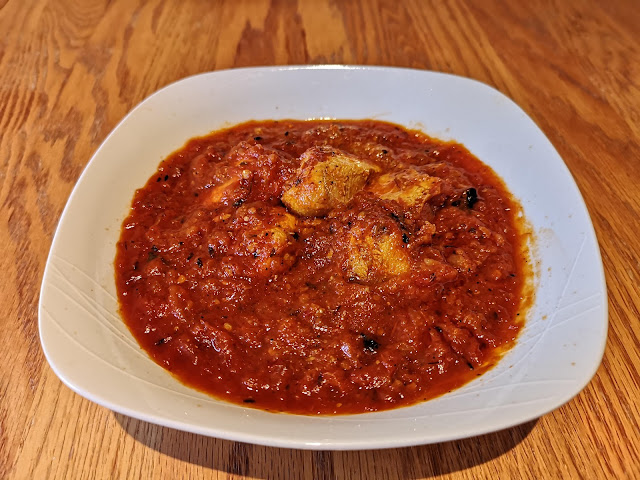 I have tried almost all of their products. This is their Chicken Koyla Karahi (nice that it is not just butter chicken and curry). This is a tomatoey curry and not overly spicy. There is a decent amount of chicken.
Don't miss this market. It is easily accessible from Surrey Central Skytrain station. In addition to the stuff we have mentioned there are fresh fruits and vegetables to be had!
By Yes! We're Eating Again! at July 12, 2019
Email ThisBlogThis!Share to TwitterShare to FacebookShare to Pinterest