So, if you are staying in Phoenix and you have never strolled through Scottsdale, you have to go at least once. There is a kind of cool touristy historic old town with some interesting souvenirs to be had as well as assorted western gear and art and so on. We were delighted by a western show in the park by Johnny Hotshot. He demonstrated his lariat, bull whip and six shooter skills accompanied by a hilarious patter. The man is a decent entertainer and was very careful to instill some gun safety in his young audience members ! 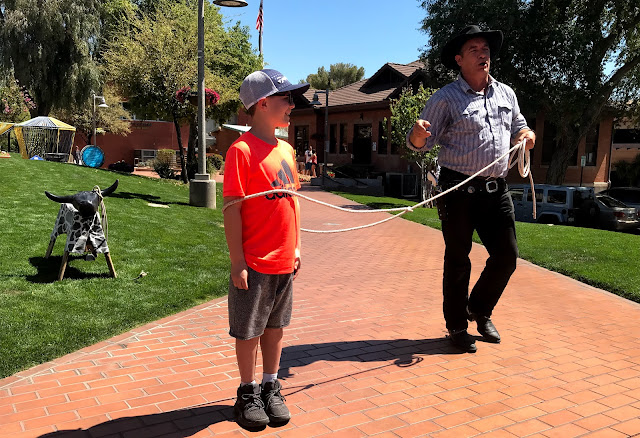 All that touristing around made us very hungry and  I have to tell you that I couldn't have been more excited as the plan was to go to Lo-Lo's Chicken and Waffles! I have been wanting to go to this place ever since I first visited Phoenix a few years ago but it just never worked out. Now here we are! 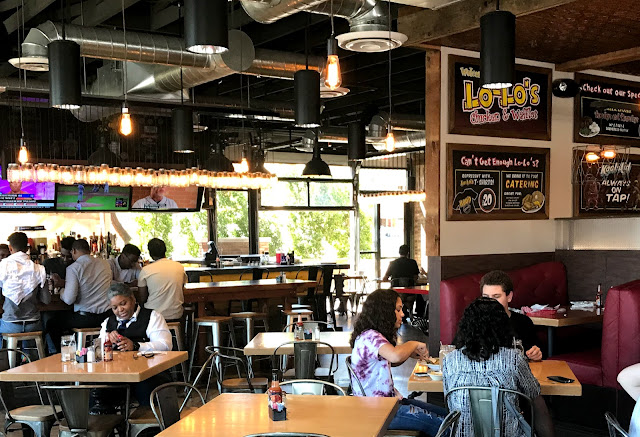 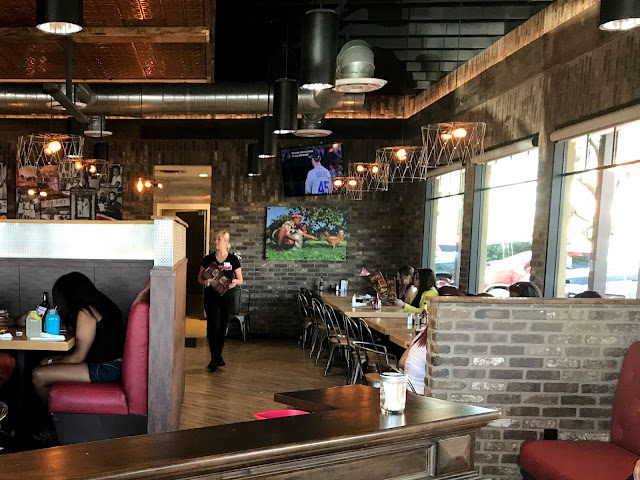 There are 5 locations of Lo-Lo's and I don't know about the others but this one is modern and comfortable. The sound track was hip even if it was a little loud and the servers were friendly and seemed to be willing to help each other out (as well as us).
The waffles here are spectacular! They are on the thin side so more crispy and less doughy with a nice hint of cinnamon making them the perfect vehicle for syrup...and chicken. And really good fried chicken too! Crunchy with a moist interior. We ate a lot of it!
We ate it with Collard Greens, Mac and Cheese and Corn Muffins. Marie and I were smart enough to share an entree this time which made it just right. I loved the greens. They had just a hint of al dente (I now its a pasta term) and were not too soft. And the mac and cheese was very rich and creamy!
We ate it smothered with Rice and Gravy and Potato Salad. And we ate it as fingers with Rice and Gravy and Fries. For the record,there were 6 of us having this late lunch.
And the menu here offers a lot of choices. Obviously, we did not get to the catfish, red fish, biscuits, grits or desserts... I know that if I lived near here that I would soon need to have Dr. Nowzaradan on the speed dial (not so funny...I know that obesity is not a joke). Let's just say the food is rich and delicious and the atmosphere welcoming!

By Yes! We're Eating Again! at April 01, 2018
Email ThisBlogThis!Share to TwitterShare to FacebookShare to Pinterest